With all the award shows that have been going on and of course the Academy Award Show coming up I thought I would show you one of my Academy Award parties.

Maybe you can use some of these ideas for your own up coming party. 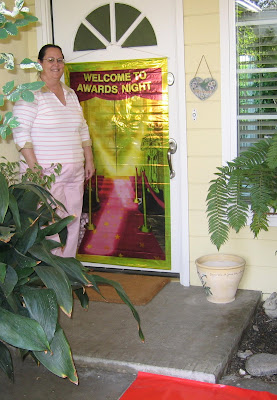 I believe the fun of the party really starts with the invitation to the event. Sadly I didn't take a picture of my invitation. I wasn't blogging yet. You can be sure I will from now on. LOL

Get your guest in the mood as soon as they pull up. I had a sign in front of our house saying "Star Limo Parking Only".

I didn't have a red carpet and it was way to costly to buy one so I just got a red paper carpet. The front door was also decorated. 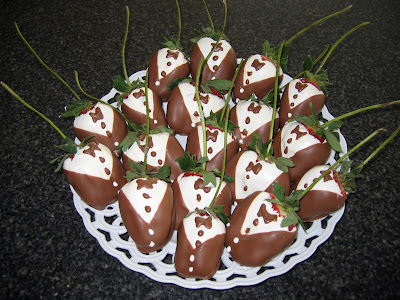 Inside the guests were treated to chocolate dip strawberries decorated to look like they were wearing a tux. Very easy to do and very yummy! 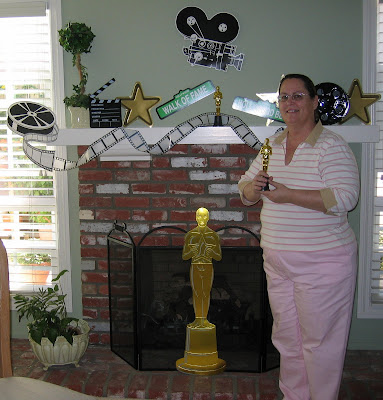 Decorate the area where the Award show will be watched. You can buy cut outs at most party supply stores or on line. 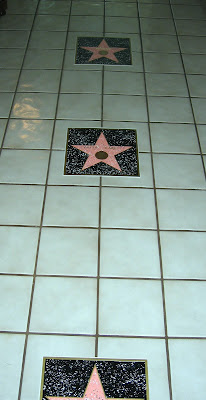 We also had our own Hollywood Walk of Fame. I purchased these tiles that look like the stars have in Hollywood. You get some gold stickers with them so you can put the name of your guest, the names of your family members or even real star names.

I made a "Hollywood" museum in one of our cabinets. I put out videos or DVDs of some popular movies and then added "props".

I know it's hard to see but the top is Gone With The Wind. The "prop" was a vintage hankie. The photo shows Scarlett using a vintage hankie.
Then there was Sideways and a "prop" bottle of wine. Next to that was Starship Troopers (have you even heard of that movie) and the prop was a REAL prop from the movie. Patty and I were extras in that movie and took the pom poms we used in our scene.
Next there was the movie Casino and the props were cards, dice and a glove that they used hand out in Vegas so you don't get dirty handling all the money from the slots.
Below that was Titanic and fancy earrings were the prop. Along with Casablanca and bar glasses for the prop.
The last was Sisterhood and a T Shirt that was given to all the actors in the movie. Again that was real as Patty and her friend Julie were the Stars, oops I mean, extras in that movie. 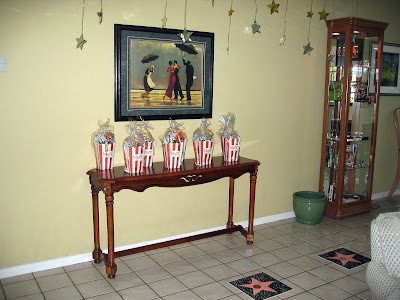 The table held the "Swag" bags for each guest. 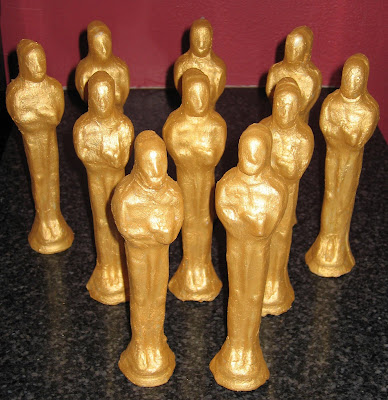 Lots of little Oscar statutes were made from white chocolate and then painted with edible gold. 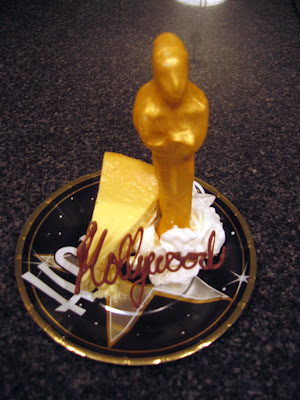 Each person got one of the Oscars with their cheesecake that was served with a HOLLYWOOD sign written in chocolate. 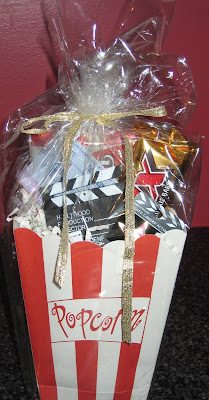 As the guests left for the evening they were each given a goodie bag full of candy, a bag of popcorn, a movie gift certificate, a Hollywood clap sign key chain and a pin in the shape of the pink stars on Hollywood Walk of Fame.
We also played games. We did bingo with things that could happen at the award show. Things like, a star trips as they go up to accept the award, a star thanks their mother and so on. Then we had a "Hollywood" trivia game and of course who picks the most winners. Whoever won got a movie pass/gift certificate.
I'm already planning for this years Academy Award Show party. How about you? Do you throw a party for any of the award shows?

Posted by Joanne Kennedy at 8:24 AM

Great Joann!
Fantastic how you always come up with the best ideas when you organise a party!
I also always love the parties you organise for Trinity.

Joannnnnneeeeeee, thanks for posting about my giveaway, sweetpea!! How kind of you. I'd do it also for you. I'm a kind chick, ya know. Just you wait to see what else I'm crafting. You're gonna squeeeeeeeeal when I show this one, chickadee!!!!!
Smooches of gratitude,
Connie

Oh My goodness.. Joanne,, your so talented. Can I steal some of your ideas??/ They are fantastic. My daughter is a huge movie fan and loves award shows. I may have to have one of these myself to get in the spirit of the upcoming award season.!! and the oscar goes to........ JOANNE!!!

I've never seen an actual 'Award Show Party'. You are so creative and I thank you for sharing this with us. Good show! xxoo

Hi Joanne
Your award party looks absolutely wonderful. I love the chocolate covered strawberries and the Oscars and cheesecake. You really know how to design and make the most fantastic themed parties. Jessica is really into all the movie awards and was disappointed we couldn't get the Golden Globes the other day. I am sue she will want an awards party just like yours when she sees your post.
Have a povely weekend.
Lindsay

WOW. I have never even thought about something like that. LOL...I dont get out much. You are an inspiration!
Lorri

how fun - your guests must have had a wonderful time at your party!

Just stand facing east with chocolate in hand, throw real hard to the east and I'll be outside to catch it with my mouth, chickadee!! I promise I won't miss a one........
Smooches,
Connie

Hey Joanne; My goodness you sure know how the throw a party. Every thing looks so great, what a fun time. Gosh wish I lived closer, I have always wanted to walk a red carpet. lol

You do a great job on your parties. I have never been to an Oscar party.

Sorry don't have any ideas

Thanks so much for joining in my party!

Oh Honey, can I be on your guest list? I've never seen a party like this before. WOW

Oh Joanne! I wish I could attend your party!! Those chocolate covered strawberries are incredible!!! YOU ARE THE QUEEN OF PARTIES!
Have fun girl!

Joanne this is the best awards party that I've ever seen! I would expect no less from you as I know how talented you are in preparing desserts. You really should be a party planner -- you always have the best ideas! I'm glad I didn't miss seeing this. Where did you buy that Oscar mold? It looks just like the one Wolfgang Puck used to make his gold Oscar desserts last year! I love the Hollywood name in chocolate too!

So cute! I found you via Skip To My Lou... she always finds the best stuff, and this qualifies, for sure. Great job!

Great blog related to the party. A Hollywood party theme is one of the easiest to throw. This is because, most of the props and costumes most people tend to already have.