WHAT'S UP WITH THE DECORATIONS AT CA ADVENTURE 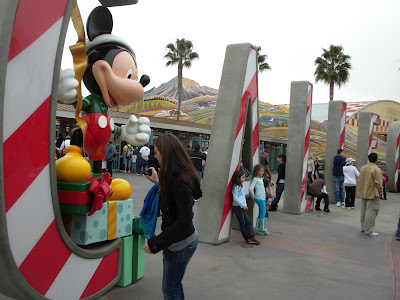 Monday, we went to Disney's California Adventure just to walk around and take in all the decorations.

After all, Disney is known for the way they go all out on the Holidays. 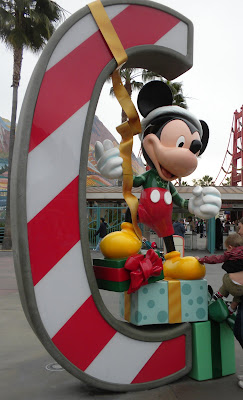 As we walked up to the gates I knew we were in for some really cute decorations.

The word California is always outside but they change the way the look for different holidays. 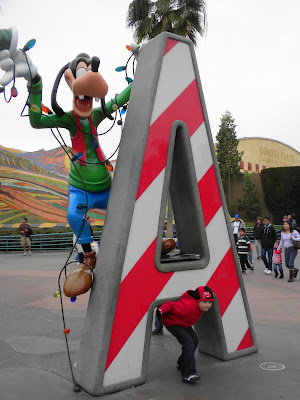 For Christmas they were done up to look like Candy Canes. With Mickey Mouse on the C and Goofy on the A.

Very cute! A popular spot for kids to play around on and have their photos taken. 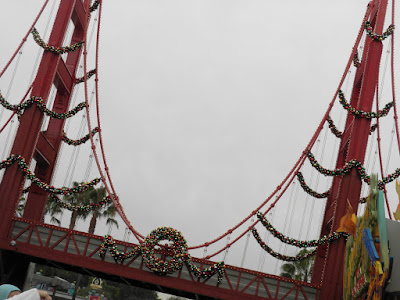 When you first walk in the big bridge, that represents the Golden Gate Bridge, was decorated with a big wreath and garland. Both covered with shinny ornaments.
But that was about it really. Not much else in the park to see but little touches here and there. It was a real disappointment. 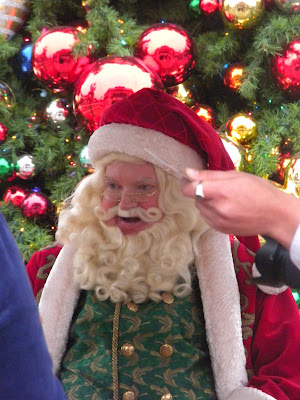 Oh, sure there was Santa. But, even he was a pretty poor looking Santa. The park was super crowded but the line to sit on Santa's lap was small.

I just don't think parents wanted him to be the Santa in their yearly Christmas photo with their child. Not when there are so many wonderful looking Santas out there. 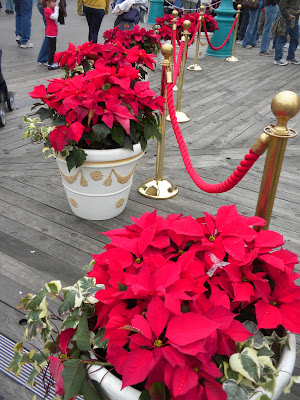 A few poinsettias in pot were sitting out by Santa as was the Christmas tree. My photo of the tree didn't turn out so I can't show that to you.
The tree was pretty and if you looked closely you noticed that some of the ornaments were in the shape of Mickey Mouse ears. That was cute. 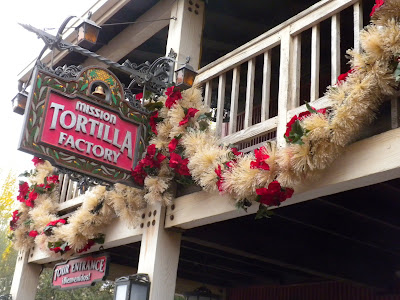 Most of the park didn't have anything to let you even know it was Christmas.
There was some white garland on this one building. 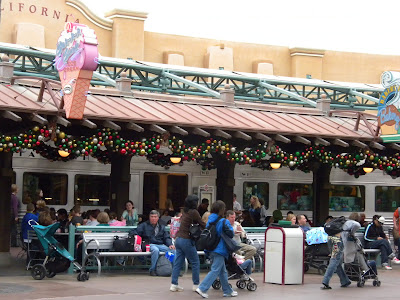 This resturant had some green garland with ornaments. 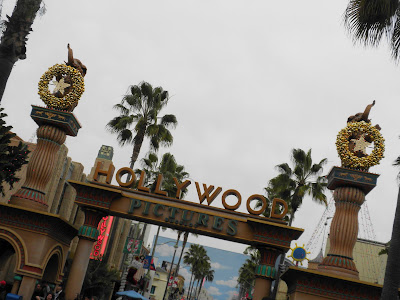 The Hollywood area had gold wreaths flanking each side of the entrance but you had to look up high to see them or you would have missed them. 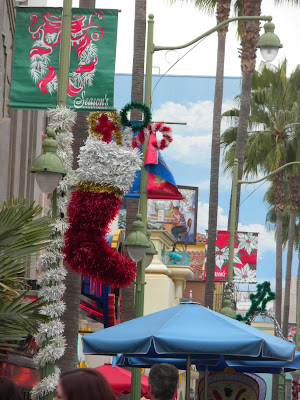 Walking down the street in the Hollywood back lot there were some decorations hanging on the lights.
We were all surprised at the lack of Christmas celebrations taking place over at CA Adventure this year. We heard several other people saying the same thing.
Now Disneyland is another story. Each land is decorated and there are tons of Christmas things going on over there.
I wonder why Disney decided to go so simple at CA Adventure this year.

Posted by Joanne Kennedy at 8:31 AM

Maybe it's more spectacular at night. I know that Silver Dollar City in Branson, MO, is gorgeous at night. Something worth traveling to see.

Hi Joanne! Oh my gosh, I'd be so excited to be at Disney right now - even with minimum decorations! To be able to walk around outside without shivering and covering every inch of my body with a coat, boots, scarf, gloves.. it would be wonderful!

Congratulations BIG TIME on your continued weight loss! I have definitely lost focus the past couple of weeks but I'll get back on track after the holidays.

It's been wonderful corresponding through our blogs this past year and I wish you a MERRY CHRISTMAS and the happiest of New Years!!!!... Donna

Maybe the lack of Decor is due to the fact their going to redo that park. I heard it through the grapevine, that's what's in store for it..

I thought the decor was terrible at Cal Ad! The center square didn't have ANYTHING! When we went, we didn't even SEE Santa.
My neighborhood has more decor that the park did.