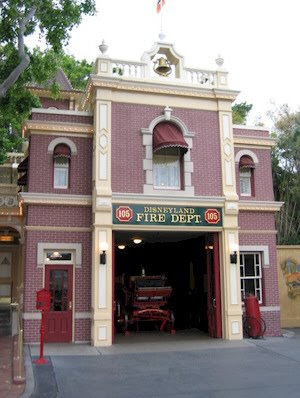 As you walk into Disneyland if you enter to your left you will walk by the Disneyland Fire Department. This is a real working fire department should there be a fire at Disneyland. 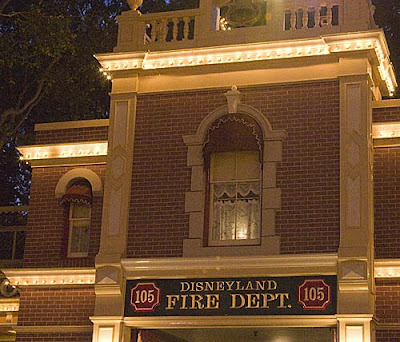 Right above the Fire Department you will see a window with a light on. This was Walt Disney's actual apartment. Yes he really lived at Disneyland. How fun would that be!
The staff, or as they are known at Disneyland, the Cast Members, would always know when Mr. Disney was actually home because he would always leave the light on in the window. If the light was off they knew he was not in the park.
Once Mr. Disney died they left the light on 24 hours a day as a memorial to Walt Disney as they believe his Spirit is always at Disneyland. 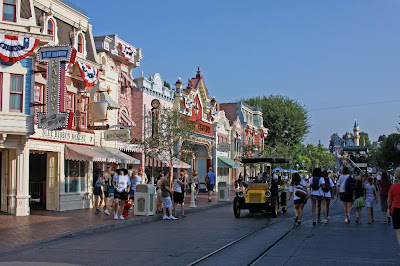 The street you walk down to get to all the rides is called Main Street USA.
The appearance of Main Street gives the appearance that it is larger then it actually is. This is because they used "forced perspective". The ground level floors were built at approximately 7/8 size and the upper floors become progressively smaller.
The buildings are also a tad bit higher on one side then the other.
By building Main Street this way it makes it appear that it's just a little short walk to get to the heart of the park. 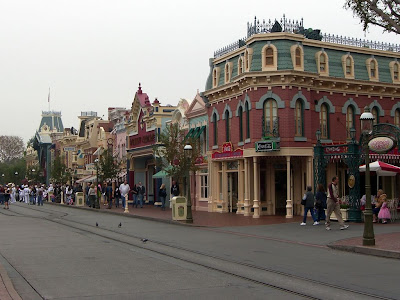 But, when you leave it appears that it's a long walk to get outside. Disneyland does not want it's guest to leave so by making it appear this way they are hoping to keep you in the park longer.

Note the windows above the main floors as you walk down main street. You will observe the names of many of the men and women who were crucial to the development and operation of Disneyland.
If you walk into the side alleys you'll hear sounds coming from the windows above. Listen closely and you can hear a piano lesson in progress, a dentist drilling and a man singing as he takes a shower.
The gas lamps along Main Street burn night and day. 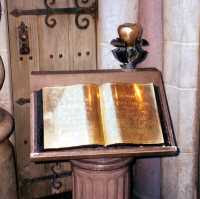 When you go to the Snow White ride you will come across an open book with a brass apple sitting near it. Touch the apple and you will hear a clap of thunder and the wicked witch! 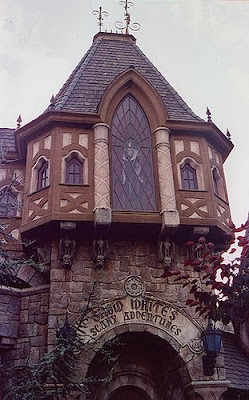 If you stand over by the Peter Pan ride and look up to the window at the top of the Snow White ride you will see a curtain. However, keep looking and soon you will see them open and the Wicked Witch will be looking out.
Since this curtain is not open all the time many people have never even noticed this. But now, you are in on the little secret so you can keep an eye out for her. 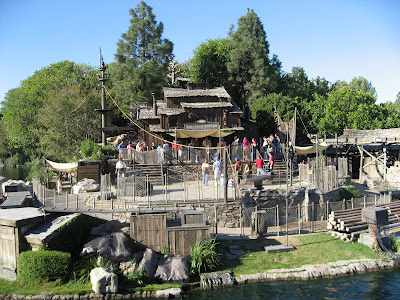 When Tom Sawyers Island was opened up Walt Disney made an agreement with the state of Missouri to annex it to them. Yes, it's true. When you step onto the Island you are no longer in CA.
Tom Sawyers Island has it's own Missouri Zip Code. This is why they do not sell things on Tom Sawyers Island. If they did so, they would have to charge a different amount of tax then the rest of the Park. Plus the book keeping would get crazy.
Should a crime be committed on Tom Sawyers Island it becomes a Federal Crime due to the crossing of State lines to get there. 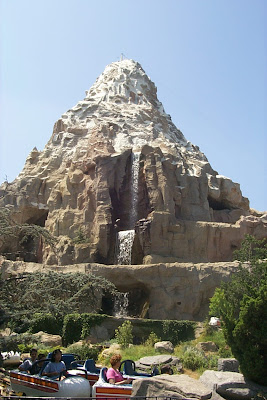 Did you know that every day Cast Members will climb to the top of the Matterhorn at Disneyland? They go up there to check on things, do maintenance and make sure the ride is safe to go on.
Walt Disney had a basket ball court built up there for the workers so they would have something to do while up there. However, since his death the basket ball courts have been turned into a storage area. 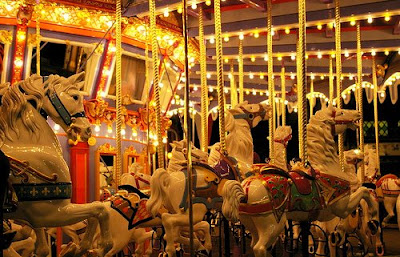 I love the Carousel at Disneyland. To me it's so romantic and has feeling of days gone by.
When they clean the Carousel they are only allowed to use water. The reason is every horse is a refurbished vintage or antique horse. They are all 90 to 110 years old.
Did you know if you go on the Mark Twain Steamboat ride and ask the Captain, you may get to help steer the ship? Also, if he are lucky enough to be able to do, you will be given a special souvenir certificate.
The last little fun fact for today is, if you stop at The City Hall on your birthday, you will be given a badge that says it's your birthday. Wear it and through out the day the Cast Members will wish you a Happy Birthday, may sing to you, may provide you with a little gift and/or may move you to the front of the line in honor of your special day.

Well that's it for today. Did you learn anything?

Tomorrow I will end my little series with a post about the Private Club 33. I will give you a peek inside. This is something not to many people have seen.

Hello....I am from Blueberryplains and I thought I would say hello. I love your blog and have added you to my favorite blogs to read. What neat information about Disney! I was there in the 70's. I lived in San Diego for 3 years in my early 20's and I loved it! I've never been to Disneyworld though. I will check back in again and try to catch up on old blog posts..Debbie

You've done your research dearie. Since it's been years since I was there I'll have to tour it through you.

My son's girlfriend works there.

Hi, I found the braided rug quite easy to make once I got the hang of the crocheting. Even though I've never crocheted in my life, the stitch was fairly easy to learn. I could stitch a colour band in about half an hour. Other people have asked me about making it so I'll do a tutorial soon. I'll have to start a new rug to use for instructions since I've finished the other one.

You've held me mesmerized by your facts of Disneyland, chick! I'll have to go there again with this "new perspective" you've given me when we go back to visit our kids in Calif. Love the facts!!!!! Thank you,
xoxo,
Connie

You WON!!! Stop by and email me the info I need to send you cup!!

YAY more Disneyland! I am sooo excited for your Club 33 post. I've been once and it was amazing!

Thanks for sharing the insiders look to Disneyland. As a child I always wanted to go and have never been nor have I been to Disney World. But DH has been to Disneyland and DD and DH to World. Walt Disney is from my part of the world -- legend has it that MM was based on a real mouse that he saw in his office in Kansas City.

Oh I truly adore the happiest place on earth.

The luck of the Irish was with you. You won the giveaway. Please email me your contact info.

Your Disney posts are Fantastic... I love a good mystery, and wish so much that I could visit one of the Disney parks one day... When I was a baby, we lived in CA and my Parents took my older sister 'n brother to Disney... I was left behind with an Aunt... go figure! LOL

Thanks very much for sharing so many fun 'n interesting things about Disney!
God bless...

It's really amazing all the thought & detail that went into Disney. This makes me want to visit again - it's been so many years.