Since I was born and raised in So. California I grew up going to Disneyland. I had several friends who worked there. For many many years I had a Year Pass and could go whenever I wanted.

To me, Disneyland is like a home away from home. But, I know many of you have never been to Disneyland or maybe only go once or twice in a lifetime.

I thought it may be fun and interesting to some of you, if I shared some fun facts, tips and even secrets about Disneyland.

There is so much information I can share with you. So, I am going to spend the next few days on this subject. 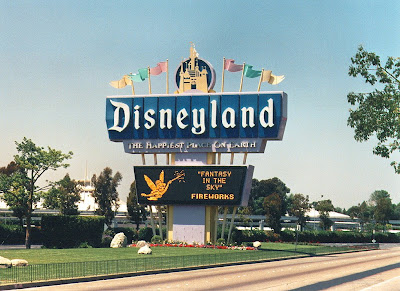 Disneyland is located at 1313 S. Harbor Street Anaheim CA. Walt Disney picked this address himself when Disneyland was first built.

Why 1313 you ask? Well, M is the 13th letter of the English alphabet so 1313 stands for Mickey Mouse. Pretty clever huh?

Walt Disney refused to ever allow a death certificate to read the place of death as Disneyland. For those who have died at Disneyland, they were not allowed to be pronounced dead. They were quickly brought under ground to a tunnel that leads out to Harbor Blvd. It is there that the person would be pronounced dead, not before hand.

Mickey Mouse will never been seen in two places at the same time inside Disneyland.

Disneyland does not sell gum.

Only Coca Cola brand soft drinks will be found at Disneyland. No other brands are allowed to be sold there.

If you buy a cup of coffee, keep your cup. The rest of the day you can then go to any place that sells coffee and get a free refill. Most people don't know you can do this as they don't often tell you. It's a little secret for those people who are "in the know".

Another little secret is, if you purchase a balloon and it pops or your child lets it go, you can get a free replacement. Also, if you find a part of a popped balloon, even if you didn't purchase it, and you take it to the balloon man/girl, you will be given a free balloon. 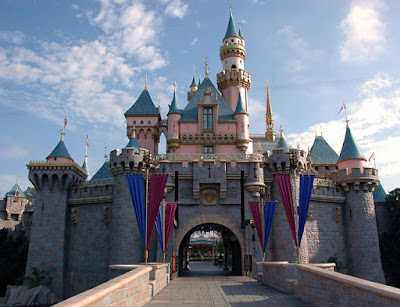 Sleeping Beauty's Castle has a real working draw bridge. It's only been lowered two times. The first is when Disneyland first opened on July 17, 1955.
Fantasyland under went a major refurbishment and was closed. In 1983 the bridge was once again lowered when Fantasyland reopened to the public.
The crest above the Castle is the Disney family crest.
To the right of the Castle, you will find stairs that lead up inside the Castle where you can go through an exhibit that tells the story of Sleeping Beauty.
It's a bit hard to find and is not always open. Therefore, many people do not even know about this attraction. 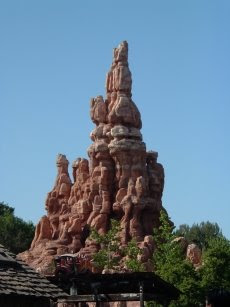 Dumbo is hiding on the wall of the 1st cave on Big Thunder. Most people have never even noticed this. 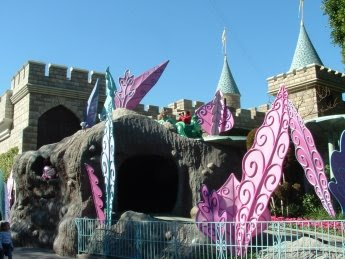 Alice can be seen only once on the Alice in Wonderland ride.

See if you can find her when you go on this ride. She is before you enter the Queen's Courtyard on the right side of the trees across from the caterpillar. 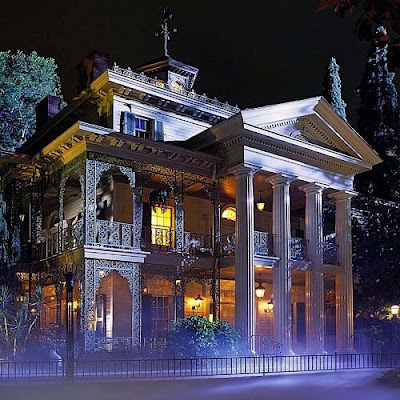 Once you enter the Haunted Mansion and go into the room that stretches, you are really going down an elevator. The doors open and you walk down the hall towards the buggies for the ride.
When you do this, you are no longer in Disneyland. The ride is actually underground and outside the park.

There is a hidden Donald Duck on the back of one of the chairs inside the Haunted Mansion.
No, I'm not going to tell you exactly where it is. It's more fun to hunt for it. 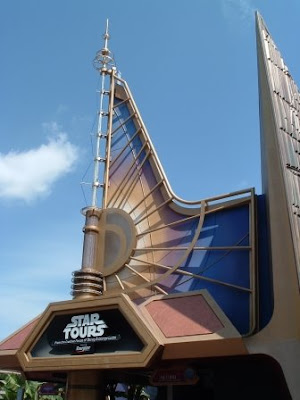 While in line waiting to get on the ride, you will hear an announcer call out for Mr. Egroeg Sacul.

This is actually George Lucas ,the creator of Star Tours, name spelled backwards. 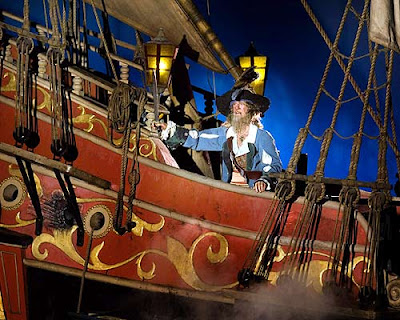 Tinkerbell, Goofy, Briar Rabbit, Blackbeard and Pluto are all hidden on the Pirates of the Caribbean ride. Again, I'm going to let you search for them. I don't want to spoil the fun.
Throughout the Park you can find Mickey Mouse hidden in different ways.

There is at least one in each Land. You may find them in the wrought iron railings or a hedge that is cut into the shape.
Take some time and search for them. It's fun to see how many you can find.
Hope you enjoyed these little known facts. There are many more waiting to be told so come back tomorrow.

Posted by Joanne Kennedy at 9:28 AM

I loved reading your Disneyland facts! I've never been to the one in California...only to DisneyWorld in Florida. How I would love to take Dear Bebe to either!

Such great facts and tips!!!
My dream is to take my kids to disneyland .
lOTS OF SAVING AND DREAMS MAY JUST BECOME OUR REALITY.
oNLY thing is I hate crowds and Lines so this would be a bummer.
But anything for Disneyland.

We LOVE Disneyland at go a couple of times a year. I love the little known facts, so thanks for sharing. I didn't know the one about the coffee, but I don't drink coffee! ;D

AHHH I'm so glad you posted this it really made me happy because I too live and breath for Disneyland. I'm so sad because since I started school in San Diego it has really crimped my Disneyland habit but I go whenever I can. I find that people who are not from Orange County have a hard time understand the nostalgia, draw, and ever present desire of Disneyland for us. When I moved to San Diego people were like, what do you mean you have an annual pass? Why would you want to go that much? But wow Disneyland really brings back happy feelings from my childhood for me and I think that's why I love it. (I grew up in Anaheim Hills, and then moved to Aliso Viejo) Thank you for posting this! It totally brightened my day. In fact I think I am going to try and go tomorrow.
:)

My dream is to go to disneyland,so thanks for sharing!! I hope that a few years later I can go to the disneyland in Shanghai! HA.I'm a Chinese girl! 我喜欢迪士尼乐园 哈哈

Oh this is sooo cool!! I love to find the little secrets. I've never been to DisneyLand, but have been to DisneyWorld over a dozen times.. love it. It's so magical when you first enter the park. I can feel myself transform back to a little girl. Thanks for bringing me back for a few minutes this morning.

Joanne, Thank you so much for your comment and helping me. I do have a counter and I have a pretty good bit of traffic. By the end of the day with everything that happened and the comments I received I feel pretty good about my blog! Thanks for answering out to my cry for help! Sometimes we just need a friend to get out of the forest....
By the end of the day I will post about my New Vintage Store Adventures!
Thanks Joanne!
Hugs,
Yvette

Joanne, Thank you so much for your comment and helping me. I do have a counter and I have a pretty good bit of traffic. By the end of the day with everything that happened and the comments I received I feel pretty good about my blog! Thanks for answering out to my cry for help! Sometimes we just need a friend to get out of the forest....
By the end of the day I will post about my New Vintage Store Adventures!
Thanks Joanne!
Hugs,
Yvette

Interesting facts! I live in the south, so we are use to Disney World in Florida. Thanks for sharing!

Interesting facts! I live in the south, so we are use to Disney World in Florida. Thanks for sharing!

I will definitely take tones of photos there!!!

Great facts! I am from California but never got chance to visit. I am aware of these hidden Disney secrets. Let us know some cool facts of California Disneyland amusement park too!