DON'T THROW THAT OUT! 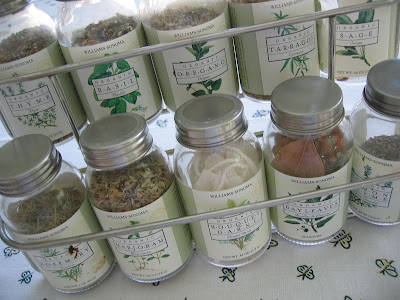 Spring cleaning has been taking place at our house. Though I must admit, it's really my wonderful sister, Patty, that does the cleaning around here. Yes, I'm spoiled! I know it. 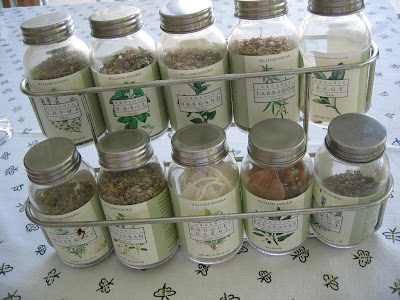 The kitchen was taken apart, everything gone through and anything expired tossed out.

Sadly all these spices were expired and no longer good. 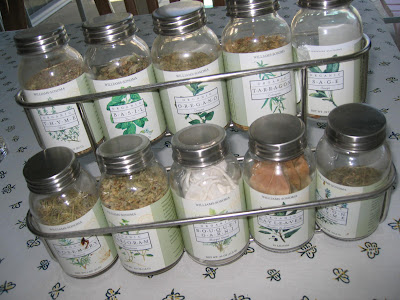 Patty thought it would be best to just purchase the spices as we need them rather then buy all of them at once, only to have them end up expiring again before we even used them. I agree. That makes more since and is much more cost effective.
I asked her what she was going to do with the spice holder. She said "I don't know, donate it or toss it out"
Quickly I shouted "Don't throw that out!" I knew I could turn it into something useful.
I threw all the spices out, took the labels off and washed the jars. 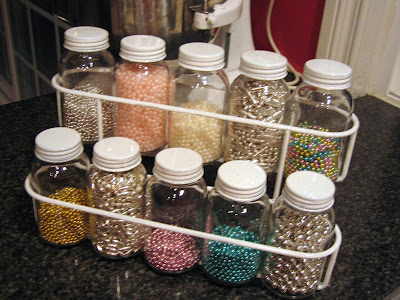 The chrome was a bit off color so I took the lids and holder outside and gave it a good coat of white paint!
It looked new and fresh again. 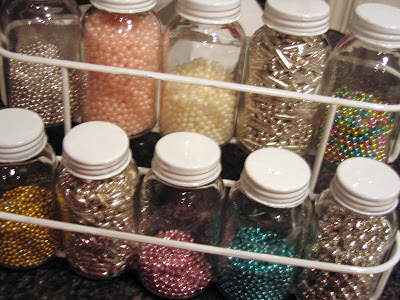 My first thought was to put it in my office and fill it up with glitters of all colors.
But, since I don't do a lot of crafts I figured that would not be the best use for me. 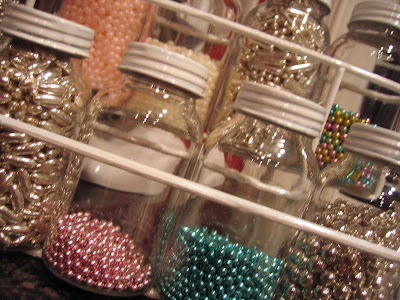 Then I thought it would look pretty cute to use them as vases and put one flower in each jar.
I still think that that would be cute but I doubt if I would use it like that very often. 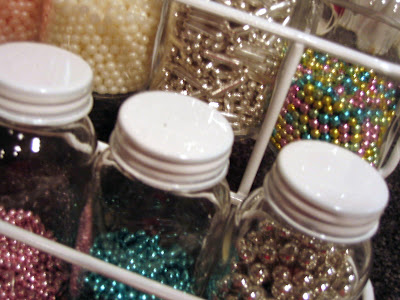 So I thought about selling it as I still thought the pretty colors of glitter in the jars would be great. 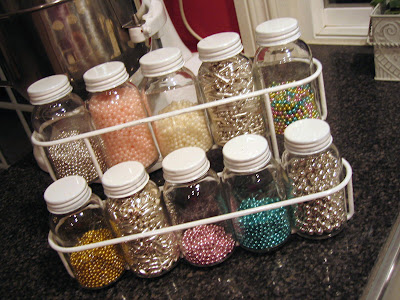 Then it hit me! I had tons of dragees in the pantry. You know those little balls used in cake decorating.
I had them in several different colors and some even in different shapes other then just balls.
So in they went! Yes, it's a perfect fit for me.
Before you ask, yes it's true, CA does not sell dragees. They claim the silver and gold in them do not digest and stays in your system. If you ate lots of them it would not be good for you. But come on! Who is going to sit down and eat cases of these things?
I ordered them off eBay. Some came from other states. Some even came from England and Canada. So if you live in CA, now you know where you can get them too.
The funny thing is, it's not legal to sell them in CA but it is legal to buy them and eat them. So no, I'm not breaking any laws.
But, they did open my packages from England. Customs opened them and tested them to make sure they were not anything I shouldn't have. They did that twice. I know because they seal up the package and put a note on there telling me what they did.

Posted by Joanne Kennedy at 7:36 PM

Love the new look for your spice rack and jars. Adorable! Love & blessings from NC!

I have old spices in little jars like that too.
My sister takes the spices that smell good and uses them in a pot of water during the Holiday's to smell up the house with Cinnamon etc.... whenever they get old, so there's always a use for them, even when they get old.

Look at you! What a wonderful idea! I love that you reused it. Brilliant!

That looks great and now you have what you need/use at your fingertips!
Great way to recycle and re-use :0)

That's brilliant, Joanne! I have one of those carousel spice racks from Costco that needs to be replaced, but it seemed so wasteful to just dump it. Maybe I'll use it for my daughter's craft beads that I keep finding around the house. Thanks for the inspiration!

Such a Pretty 'n Clever idea! You're always coming up with such neat things, Joanne...

I really enjoyed your post about all of your Beautiful Cake Plates... a very impressive collection!

Great idea!!! They look so coordinated and neat in the jars and in the holder! Awesome :)

I really like your idea. I have to go through my spices and might end up with something like this.. great idea's as always. Have a wonderful day.... off to exercise!!

Joanne..YOU are amazing! I probably would not have wanted to throw it out...but...I would not have had a clue what to do with it.
JUST look at that! It is adorable and useful. I would want to put it right out where it could be seen!

You have the best darned idea, SO creative! Wish you lived next door! :)

Hi Joanne
Great idea to use the rack for your dragees ( I had no idea that is what they were called). I wonder why they can't be sold in California? That's weird. I hope customs didn't eat too many when they tested them!
I love it when a use is found for something rather than it being thrown out. I hate going to the dump with rubbish because it breaks my heart to see things people have thrown away that look perfectly fine.
Lindsay

What a great idea!!! I love the way it turned out.

That's an adorable way to use the little spice rack...great idea...
Now, excuse me while I go check which spices I have that are expired.....:O)
xo bj

I love what you did with that spice rack! What an adorable craft organizer!!!