Lindsay from The Cross~Stitch House sent me this email today that I just adored. I asked her if I could share it with you and she said yes. So here it is.

I hope it touches your heart just as it did mine.

In 2003, police in Warwickshire , England , opened a garden shed and found a whimpering, cowering dog.. It had been locked in the shed and abandoned. It was dirty and malnourished, and had clearly been abused.

In an act of kindness, the police took the dog, which was a Greyhound female, to the nearby Nuneaton Warwickshire Wildlife Sanctuary, run by a man named Geoff Grewcock and known as a willing haven for Animals abandoned, orphaned or otherwise in need.

Geoffand the other sanctuary staff went to work with two aims to restore the dog to full health, and to win her trust. It took several weeks, but eventually both goals were achieved.

They named her Jasmine, and they started to think about finding her an adoptive home.

But Jasmine had other ideas. No-one remembers now how it began, but she started welcoming all Animal arrivals at the sanctuary.

It wouldn't matter if it was a puppy, a fox cub, a rabbit or, any other lost or hurting Animal, Jasmine would peer into the box or cage and, where possible, deliver a welcoming lick. 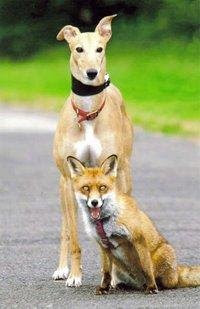 Geoff relates one of the early incidents. "We had two puppies that had been abandoned by a nearby railway line. One was a Lakeland Terrier cross and another was a Jack Russell Doberman cross. They were tiny when they arrived at the centre and Jasmine approached them and grabbed one by the scruff of the neck in her mouth and put him on the settee. Then she fetched the other one and sat down with them, cuddling them."
"But she is like that with all of our animals, even the rabbits. She takes all the stress out of them and it helps them to not only feel close to her but to settle into their new surroundings. 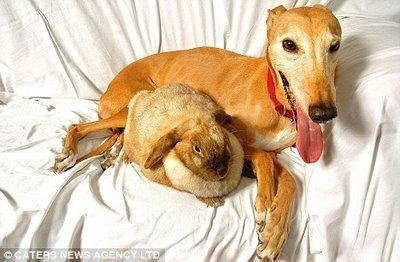 "She has done the same with the fox and badger cubs, she licks the rabbits and guinea pigs and even lets the birds perch on the bridge of her nose."

Jasmine, the timid, abused, deserted waif, became the animal sanctuary's resident surrogate mother, a role for which she might have been born. The list of orphaned and abandoned youngsters she has cared for comprises five fox cubs, four badger cubs, 15 chicks, eight guinea pigs, two stray puppies and 15 rabbits.

And one roe deer fawn. Tiny Bramble, 11 weeks old, was found semi-conscious in a field. Upon arrival at the sanctuary, Jasmine cuddled up to her to keep her warm, and then went into the full foster mum role. Jasmine the greyhound showers Bramble the Roe deer with affection and makes sure nothing is matted. 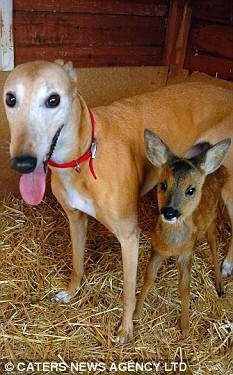 "They are inseparable," says Geoff "Bramble walks between her legs and they keep kissing each other. They walk together round the sanctuary. It's a real treat to see them." 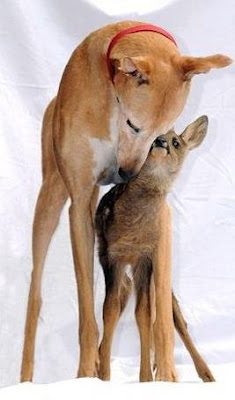 Jasmine will continue to care for Bramble until she is old enough to be returned to woodland life. When that happens, Jasmine will not be lonely. She will be too busy showering love and affection on the next Orphan or victim of abuse. 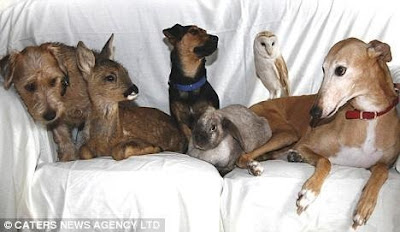 From left, Toby, a stray Lakeland dog; Bramble, orphaned Roe deer; Buster, a stray Jack Russell; a dumped rabbit; Sky, an injured barn owl; and Jasmine with a Mothers heart doing best what a caring Mother would do... Such is the order of God's Creation.
Isn't that a great story? So the next time someone tells you they are not sure about wanting a rescue dog and would rather get one from a breeder please be sure to tell them about Jasmine and how great a rescue dog can be.

Posted by Joanne Kennedy at 3:03 PM

What a sweet story!! Warms the heart!

That was beautiful. You always wonder if all kinds of animals can communicate between themselves. I guess this just goes to show you that they can and that there is something deeper there than just animal instinct.

Great story and thanks for stopping by my blog about my military life. When my husband leaves,, i'll let you know.. thanks for all your prayers and support!!!

Jasmine is like some people. Nurturing to all. What a beautiful story. Thank you for sharing it, Joanne.
Mona

Hello Sweet Jasmine! Your story touched my heart so much that I have tears in my eyes. Yes, you are truly God's emmissary for the animal kingdom. Good Girl! xxoo

Oh, Joanne ... Oh my gosh, that is the most incredible story ever! Jasmine is amazing. I loved this story - thank you for sharing it... Donna @ An Enchanted Cottage

What a beautiful girl Jasmine is! Those eyes of her just exude love.....I adore Greyhounds..my brother has an Italian Greyhound and she is the most precious little girl! I love this story so much..it gives hope in so many ways..thank you for sharing it!

What a sweet story! I have always loved greyhounds. We have a greyhound rescue center in the city where I live, so there are lots of greyhounds here that are adopted by people. Thanks so much for sharing. Love & blessings from NC!

Oh, what a precious lot you have! So diverse! Who would ever have thought a human could get them all in one place at the same time. Good work...Sharon

What a wonderful story. Thanks for sharing it.

I came out from my under my covers to "view" the world for a bit (been sick) and I'm so glad I did. This is what I needed to "hear" to pick me up.
All my animals have been rescues. Every single one of them, including my pure breds. I will always "rescue".
Thanks for the "feel good".
Hugs!

What an incredibly touching story! :)

Ohhh! Fantastic story! That is so sweet I love greyhounds they are actually very gentle and sweet dogs. Thanks for the story!

What a touching story. We all need a Jasmine in our lives.