EXTRA! EXTRA! READ ALL ABOUT IT 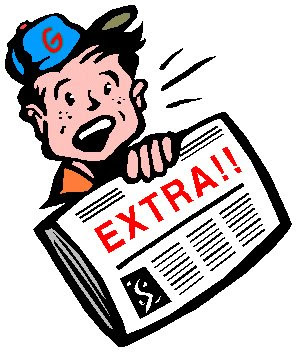 I've been getting a lot of emails asking me to give up dates on different posts of mine. Sometimes I can be so bad about posting follow ups and for that I'm sorry.

First, I wanted to thank you all for caring enough about what I post to even want the follow ups. It's nice to know that there are people out there who really do enjoy my blog and think about what I write about.

Prayers do get answered! My friend Renee, the pregnant girl that fell down the flight of stairs at Disneyland, is doing fine. Her baby is also fine. She ended up having to stay in the hospital for a few days so they could watch her and make sure there were no problems with her baby.

They were unable to take x rays due to her being pregnant so they gave her an MRI. It didn't show that she had a broken hip. But they still were not sure. Since they don't really do much for a broken hip, unless it's bad enough to need surgery, they sent her home with a walker and told her to take things easy and rest.

She is now feeling all better and her baby boy is doing great. So thank you everyone for your prayers.

My brother, Gene, who had a major stroke, is also doing well. It's been almost a year since his stroke. His life has changed drastically since that day.

He still can not use his right arm or hand. Though he does have a little bit of movement in his shoulder area. Just not enough to really make a big difference.

He is able to walk on his own and has even been able to walk up and down the stairs. However, it is very hard for him to do this and he gets super tired. He still has gained full use of his right leg and foot. He had to learn a whole new way of walking. Mostly using his hip to move his leg forward.

So, unless he is doing his PT or practicing at home most of the time he is in a wheelchair.

His speech still is not 100% back to normal. Though you can understand him just fine until he gets tired or feels lazy and then you may have to ask him to repeat what he said.

He still has double vision if he doesn't wear his glasses. But, he did just get new lenses and was told his eyes are continuing to get better each time he goes.

He has his ups and downs as far as his moods go. I'm sure it's super hard to deal with all the changes he has had to go through. He also gets a bit depressed that his recovery has not gone as fast as he had hoped for. However, he does still see small improvements every week so he has been very good about trying hard to stay up beat.

I'm super proud of my brother. He has worked long and hard hours every day trying to get better. His outlook has been very good and he has not given up.

I can't even imagine how hard it would be to be perfectly fine one day and then wake up the next day and you are paralized on your right side, have double vision and can't talk. Talk about scary!

It would be great if you keep him in your prayers! He still has a long way to go.

No, I have not found a vintage travel trailer yet. Still looking. But, I'm really kind of happy I have not found "the one" yet. I'm still waiting for our house up North to sell so I'll have the money to get it.

The house I'm talking about is the one my Uncle left to my sister, Maureen. and me. It's been on the market for a long time and finally we got a buyer. We were in escrow and all was going well. Then it fell through at the last minute.

We were pretty lucky though, because, right after it fell through we got another couple that wanted to buy it. They want to build a preschool on the property. So they went to the county to make sure they could, got the approval and made us a bid which we accepted.

It's now back in escrow and if all goes well we should close mid April. So please, keep your fingers crossed that it finally goes through.

On the bird cage garden I did... I'm so excited so many of you are going to plant one of your own. I hope you post about it so I can see how it turned out. Or at least email me a picture.

I did not add any special drainage to the cage as there was an area the water could drain out of. If your cage does not have that, then you would either want to drill some holes or put some rocks down before you add your moss.

Thank you for all your compliments on my cakes. I don't really decorate that many any more. I started out doing them for fun. Then people started to contact me to buy them. Selling them was an honor but it quickly turned into a "job" and became very stressful, which in turn, made them not fun to do any more.

So, I raised the prices up really high thinking no one would want to pay that amount for my cakes. Well, they did. Talk about stressful! I thought I would have a heart attack. I was worried about making sure the cakes came out perfect because people were paying so much money I couldn't give them a bad cake.

Then I quit selling my cakes all together. I would only make them when I wanted to and for my friends and family. Once in awhile I will do a cake for pay but not very often.

I took all the Wilton Classes at Michale's and then I joined a local cake club where I learned about classes offered by some of the top cake decorators. You know the ones you see on The Food Network. I took several classes from the best of the best decorators.

So for those of you who want to learn how to decorate cakes I would advise to do the Wilton classes to see if you even like it. If you do, you can always take more advanced classes other places.

I think that should about do it for the questions and updates. I'll try to be better in the future about my updates.

If you have any other questions, about me or anything I post about, I hope you will continue to email me or leave me a message asking your question and I will be more then happy to answer them for you.

Posted by Joanne Kennedy at 6:12 PM

Joanne...thanks for all that updating. I already knew a bit of it..but was sorry to hear about your brother. In some ways I am glad Pat did not have to live through what can happen with a stroke. He was the type that would not have taken it well..and suffered even more emotionally.

I used to think about decorating cakes..but it seems I have stopped doing a lot of what I used to want to do badly!

Got something new to tell you. Also..wish you could tell our story on your blog. I would be afraid to..but..it is really interesting. I do wish the pictures were better...especially the scrawls...will write. Poor Mele. They bug her to death at times..but she seems used to them.
Hugs...:) later then~

I just now found your blog and added it to my list! I really enoy reading all! Sharon

Thanks for the updates. So glad the woman and her baby are fine.

Well it's about time LOL.

I am so happy to hear Gene is doing better. I know in the beginning you were not sure how things would turn out. Prayer is great.

I go back and forth about cake decorating.

P.S. I have my first dog transport this Saturday, two little doggies.

Joanne, thanks for all the updates, and my prayers are with your brother. My step dad had had a stroke and took a while to come back, It is a life altering event. You are such an inspriation..can't tell you enough!!