I MADE A SNOWMAN CANDY BOX AND SO CAN YOU!

In a past post I've told you that I have never built a snowman before. Well, now I have! Sort of.

I found this craft over at Joli Paquet the other day and thought I would give it a go. 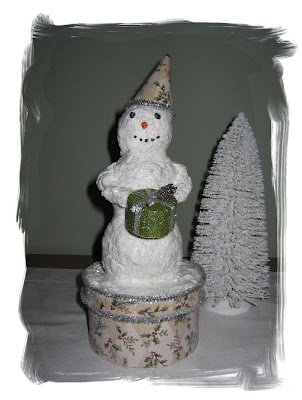 The photos don't show you how much he sparkles with glitter. Both the box and the snowman shimmer and shine. 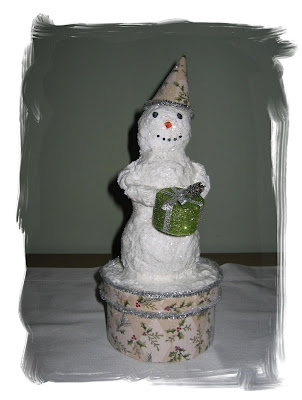 This little snowman is made out of paper mache. It's the first time I've made anything from that since I was in grammar school.

Since I collect snowmen I thought this little guy will sit out with the rest of my collection.

I may make some other ones since I make a peppermint bark every year and thought it would cute to hand it out in these little boxes.

If you would like to make one of your own you can find the step by step instructions at http://joli-paquet.blogspot.com/2008/11/snowman-box-tutorial.html

I also saw some cute candy boxes at a gift store with just a big snowman head. I thought that could be cute to make too.

Posted by Joanne Kennedy at 8:49 AM

Your snowman is adorable!

How sweet. I think he is quite handsome!

He does look lovely!

Wow, Joanne..that is awesome! I love how he looks almost vintage...so charming! I love the new look of your blog, too..very pretty!

I love your snowman, what a great idea. I'm going to have to print the tutorial and make me some. I love snowmen. I always think they are so cute.

Good job on your snowman! It looks like you're getting very prepared for the holidays! :)