Yesterday was the first time I had an outing with my new MeetUp group.

It was only for lunch and to talk about what the members wanted the group to be like.

We met over at Ruby's Diners. We all had a yummy lunch and got to know each other a bit, shared some good ideas and had lots of laughs. 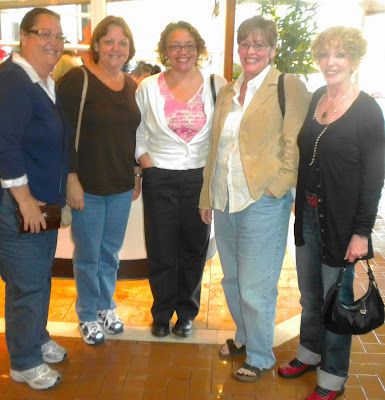 It was just five of us and three members who said they were coming didn't show.

We all agreed that we wanted this to remain a smaller group of women who could form long friendships and trust each other rather then to become a large group of strangers that met up every now and then.

I have about 38 women who have joined my group so far. More then I really wanted. Most of them have a long list of groups they belong to and really don't join in on any of them.

So, I sent out an email telling the group there were rules in my group. The rules were simple. If you RSVP yes to a meetup then you are expected to show up or let us know you won't be there.

I think it's rude for people to say they are coming and then don't. The rest of the people who do go are waiting around and putting off having fun just to wait for everyone to show up.

If you can't come or changed your mind, then just let us know and we won't wait for you.

Also, I made a rule that everyone has to check in even if it's just to RSVP no to at least one meeting every three months.

That way, I know the member still is interested in the group and has not moved or decided to not be a part of our group.

Well, I got some really nasty emails from some of the women saying I was to demanding and required to much from them. One lady said I was treating everyone like 12 year olds and was to stressful for her.

I thought it was sort of funny to get their emails because they were the ones I knew would not be a good fit to our group even when they joined but, I wanted to give everyone a chance so I let them in.

I was happy to get the drama queens out of the group early on. Now I'm hoping that the rest of women can just join in and have fun.

We have several things lined up and after the holidays are over I'm really going to set up some fun outings. I'm looking forward to meeting more of the women and forming some good friendships.

So tell me, do you think the rules are to harsh? Or, do you agree with me and think they are just simple rules that are showing respect to the others in the group?

Posted by Joanne Kennedy at 9:17 AM

I've been part of many different functions over the years, and a few "bad eggs" seem to spoil all the fun. Which is the whole reason of being part of a fun group to begin with. Right?

So consider yourself lucky that those who don't want to play in your "sandbox" by your "sandbox" rules leave now, before you begin to feel obligated to babysit them.

Just focus on those that become true friends and don't sweat the others!!! :) They'll find another group.....

Besides, I think, as a whole society, we spend too much time tip-toeing around trying to please too many different views, opinions, attitudes too much of the time. Life's too short!!! Speak your mind and live. It's your party!!!

I'm just sorry I'm no longer in So. Cal. We have a bunch in common.

It's called good manners. Simple and plain. A good way to weed out those that don't have the same understanding as the others would.

So, just move on and leave the others behind.

"No one can make you feel inferior without your consent." ~ Eleanor Roosevelt

P.S. How is your sister doing with her stone ?

Hi Joanne,
No I don't think you are wrong at all.
I think its terrible to be waiting on someone who says they are coming and they do not show up.
Now if it was a real 911 then of course that is a different story, but just not to show up and not call, that is not nice!.
So I say Party on without them!
Have a great day,
Elizabeth

I think your rules sound just fine. Manners count now days and that is all that you are asking for really.

I think the things you asked of your group basically boil down to common courtesy. So I think you're definitely better off without those who weren't willing to follow those simple requests... Donna