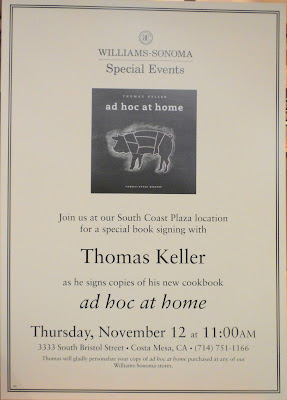 My nephew, John, is an executive chef and loves cooking and eating fancy foods. He enjoys going to restaurants of well known chefs and trying different recipes from their cook books.

Thomas Keller is one of the chefs he admires and so we my sister, Patty, saw he was going to be doing a book signing for his newly released Cook Book, she thought it would make a great gift for John's upcoming birthday.

She was going to busy and unable to go though so she asked if I would go get the book and get it signed. Since I wasn't doing anything I told her I would go.

It was just up the street at South Coast Plaza and I figured it would only take a few minutes of time. So off I went. 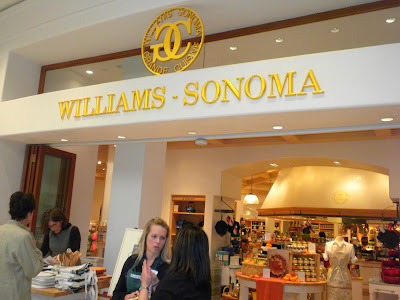 The signing was at Williams Sonoma. I love that store! I figured that while I was there I could do a little Christmas shopping myself. 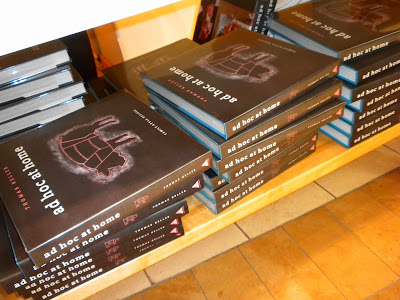 I found the book and went to purchase a copy. Only I was told that all the books on display were already purchased and being held for the people who bought them. They were not sure if there were any more copies inside or not.
What! I never dreamed this guy was so popular. So I quickly went inside and found one of the few copies still for sell. I paid for it and then went to get in line to have it signed. 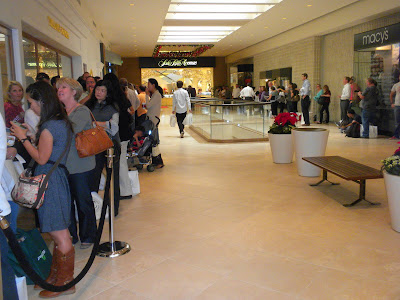 I was shocked to see the line of people waiting went all through out the mall! I couldn't even find the end of the line.
So much for this being a quick stop. I knew I was going to be there for a long time.
I found the end of the line and took my place. Quickly I was no longer the last person and people kept coming and coming, lining up in back of me.
I love to watch the Food Network and knew several of these top chefs but if it had not been for my newphew telling me about Thomas Keller I wouldn't have any idea who he was. After all, he is NOT on the Food Network.
He will be on Top Chef next week though.
So, I just couldn't get over how many people knew who he was and would pay $50.00 for his cookbook then stand in line for hours to get him to sign it. 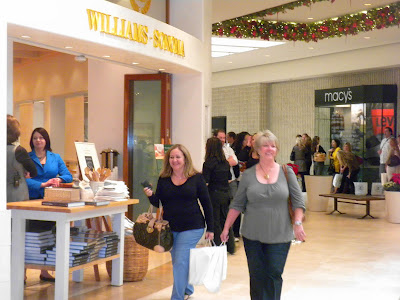 Once people got their book or books signed they came out of the stores happy as lark.
The line moved slowly. In fact it took me 3 1/2 hours to get the book signed.
But, I finally made it! 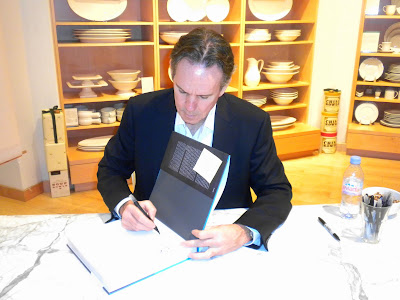 There he is! Thomas Keller signing the book for John. 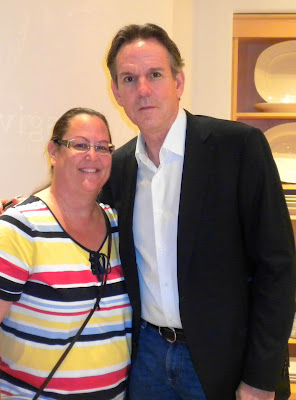 He was very nice and not only required each customer to be introduced to him by name so he could acknowledge them, he also stood so he could take a photo with each person.
He had to be super tired! I know I was. He still had about two more hours to sign books too! Poor guy.
I'm sure John will be thrilled to get his gift from Patty and I was happy I got to help her out.
I met some really fun people while standing in line and we told stories and had lots of laughs while we waited.
Have you ever waited in line to have someone you admire sign a book? If so, who was it?
Speaking of cook books, don't forget to sign up for my Cook Book Give Away. You still have time to do so. Just scroll down and leave a comment on that post.

Posted by Joanne Kennedy at 7:19 AM

Oh, what a wonderful gift for an executive chef! That was very nice that Mr. Keller personalized the books and stood for photos. Many times they (bookstores and/or authors) will not take the extra time to personalize.

Well, the authors I've stood in line for probably wouldn't ring a bell with adults... When the girls were little we saw Jan Brett at a local bookstore and Marc Brown of the Arthur series - both authors who we read non-stop when the girls were little. And just last year Amanda and I went to see another of our favorite children's book authors/illustrators, Tomie dePaola, who I posted about. He was promoting his Brava, Strega Nona popup book.

I agree, it's so much fun to chat with the people in line - the waiting doesn't seem nearly so long then!