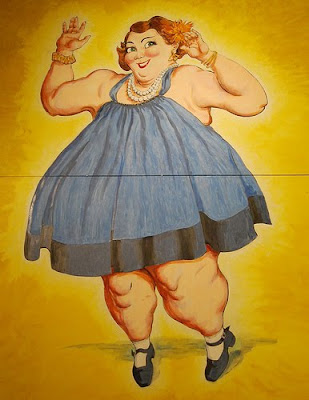 Today was my weigh in day at Weight Watchers. I was thrilled when I stepped on the scales and had another 1.8 lb loss. That brings me to a 47 lb loss so far.

I have to say that sounds like a lot of weight! Well, it should because 47 lbs is a lot of weight. I still have a lot more to go though. But, I'm going to make it this time to my goal weight. I know I will because things are different this time. I'm not in a hurry and I'm not on a diet.

But, I'm having a hard time in another area. I'm not sure to how to even start to work on that.

I feel better too. So what's the problem you ask?

When I look at myself in the mirror or in photos I still look the same to myself. Like I have not lost anything really. 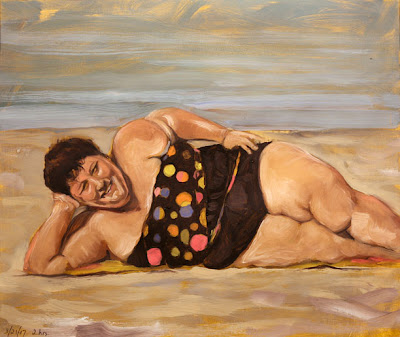 I've had lots of people tell me how much better I look and make remarks on how much I lost. I've even had two people start on Weight Watchers because they said I inspired them with my weight loss.

I was over at a friends house and her husband came up to me and said "You look really good. You have lost a lot of weight". Now I don't know if his wife told him I was on a diet or not but I do know he is not the type of guy who would say anything about a woman's weight if he didn't mean it.

Today in my meeting I sat next to a lady who I've never sat next to. She said she heard I lost over 45 lbs and was asking me questions on what I did to to that. She then said "How much more do you want to lose?". I told her about another 45 lbs.

Her eyes opened wide and said "Really? You sure don't look like you need to lose that much!".

It's nice to hear all these remarks and I start to think "Well, maybe I do look better". Then I see a photo and think "Everyone has lied to me! I'm still just as fat as always!"

I was thinking by summer I would be comfortable in a bathing suit in public but I feel like I'm really going to look like that lady in the photo above. I've heard it sometimes takes time for your mind to catch up to your body. I don't know if this is true or not.

I've been fat my whole life. OK, not my whole life. I was born early and was only a tiny runt. But, by my 1st birthday I was one of those kids with rolls on my arms and legs and they have been there ever since.

A chubby kid! I was the one picked last when we had PE and teams were picked. I was at the end of the pack when we had to run around the field.

I had to shop in the "chubby" kids area. I was always bigger then my friends and classmates.

In high school, I was fat too. Though I look back now and wish I was that size. But, you know how teen girls are. Sticks! I was twice their size.

So, I'm used to seeing myself as the fat person. I've never been anything else. Maybe that is my problem.

Well, don't get me wrong. I know I'm still fat. Just maybe not as fat as I think I am.

I just don't understand that if that is true, then how come I see the same size person in photos of myself?

Has anyone else had this problem? If so, how did you get over it?

I was going to post a photo I took of myself on the first day I started Weight Watchers and one today so you could see for yourself what I look like. But, I don't have the first day photo because it was on my other computer and I have not gotten it put on to my new computer yet.

Congrats on the weight loss. I know it's hard to stick to it. But you've done well.

I know exactly how you feel. I lost alot of weight last year, and although I heard the compliments and saw the scale....I never saw it. I gained all my weight back. Now I just long to go back to what I weighed. But I just didn't see it. I never figured out "how" to see the change in myself. I'm starting back again at the starting point...and hoping to see myself differently along the journey this time. Good luck! I'm sure you are beautiful outside, the way we all see you inside on this blogsite.

Congratulations on your weight loss. I am so proud of you. Keep up the good work. Love & blessings from NC!

Congrats to you...I'm sooooo HAPPY for you! I just started WW last week...I lost 3.5lbs. my first week and I was happy with that...I know it will take a long time to get it off but I'm going to hang in there...my hubby is doing it with me:) We both need to lose about 40-45lbs. and we are soooo ready to get it OFF! Keep up the good work...you are half way there:)

That is an am amazing accomplishment! Think about it like 8 bags of 5 lb. sugar. That's alotta sugar! I used to work with anorexic/bulimiac girls, and no matter how skinny some of them were, they would see a totally different person in the mirror. The mind is a powerful thing. Remind yourself how far you have come and celebrate each little step. Perhaps try a new hairstyle or buy some new earrings. Most of all, accept those compliments! You deserve them!

I must tell you that your posts always prove to be of a high value and quality for readers. Funny Images.

I know exactly what you are talking about! It's like you took everything in my mind and wrote about it in your blog post! I have lost 65 lbs in 6 months and when I look in the mirror, I see the same person - but people tell me I look so thin! I went from a 22 and now am in a 12 and will finish my weight loss when I lose the final 20 lbs...I also look back at high school pictures and remember being the chubby cheerleader (compared to the size 2 girls on the squad!) and wish I was that size 11 again! I guess my brain hasn't caught up either! Congratulations on your weight loss thus far and keep up the great work! I know firsthand exactly what you are going through! Maybe by summer we'll both be brave enough to wear bathing suits out in public!
your cheerleader over at goddess of my cottage -
terina

I HATE the whole body image thing. Even when I've been what I consider thin (for me) my mind is still thinking fat fat fat! Then sometimes that's when I start sabotaging my eating habits. Then start to gain. I'm not happy with how I look at this time. Winter is a hard time for me.

You have done an awesome job Joanne! I'm so proud of you!! Keep up the good work... we have to work on our brains...

Congrats!! Wow you have been dedicated. I used to follow weight watchers and like the fact its about changing your view on eating didnt make me feel i was on a diet, was the only thing that help me drop a few dress sizes. I agree with you though i still look in the mirror and see lumps and bumps and feel as big as the day i started :( lol. xX

Congrats to you! That is a wonderful accomplishment!
I know the feeling..always a struggle..
I have been poking around your blog and see you like Irish things.
I am having my 2nd annual St. Patrick's Party this year, sure hope you will join in! I see you have wonderful things to use!

Congrats! I understand the body image part! It's hard to overcome! Good luck on your journey! I am know I am always on mine!