The 24th is going to be the date of Trinity's Annual Halloween party. This year is a Pirate theme.

I always like to get things ready ahead of time so on the day of the party it's not as rushed as it could be.

I like to put all the napkins and utensils together and I always use a napkin ring to do so. 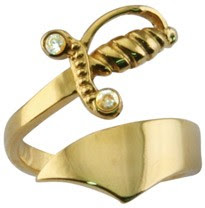 I love this one! If I was doing an adult party I think I would have spent the money to get these. I find them rather classy.

But, since it's a kids party and we are going to have about 24 kids I didn't want to spend a lot of money. Therefore, these great napkin rings had to be passed up. 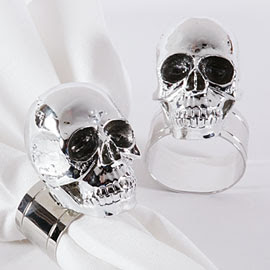 I found these great skull heads but again...way to much money to spend for this party. 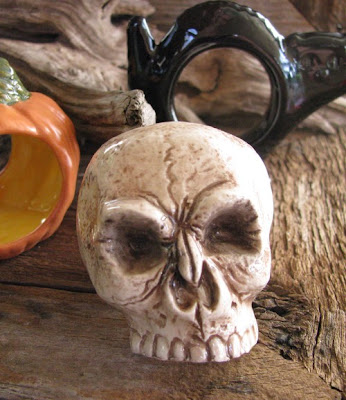 My search lead me to this one. It cost less then the other two but still it was more then I wanted to spend. So I continued to look. 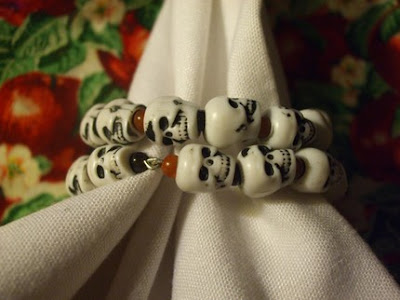 I saw this idea and thought, I could make these. I could just get some skull beads and add them to wire or string.
Then I added up how many beads I would need and the cost once again went up pretty high.
Oh why are napkin rings so costly?
I knew I wanted something cute. Something that only cost a little bit of money. Something that was not just paper or ribbon. Something that could be used again or at least taken by the kids to enjoy later. 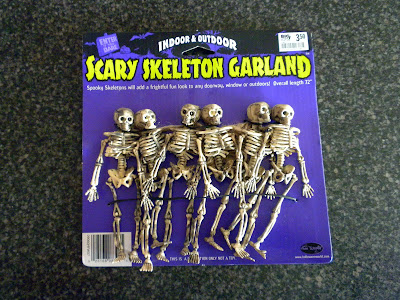 Then I came across these. The cost was good. They would last for more then one use or the kids could take them home.
I was sold! Yes, I know these are not napkin rings and the package says garland but with a little bit of time they would be prefect. 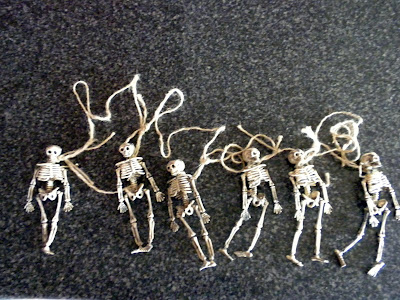 There were 6 skeletons per garland and they were tied with the perfect string! 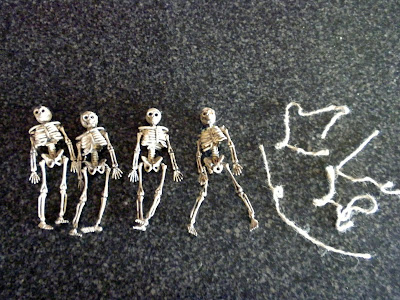 So I took them apart. That was super easy to do as they were just tied with lose knots.
I also kept the string. 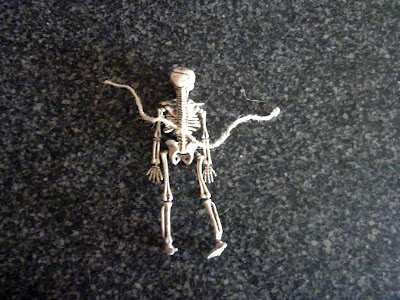 I tied the string around the center of the skeleton. 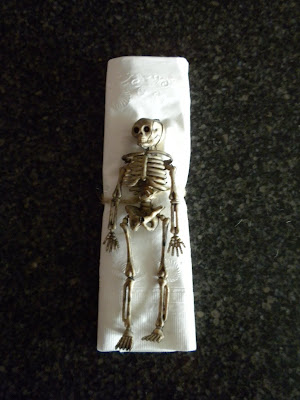 Then put the eating utensils inside the napkin and folded the napkin. I tied the skeleton around the napkin and was set.
I just did one with a white napkin so you could see it better. Pretty cute huh? 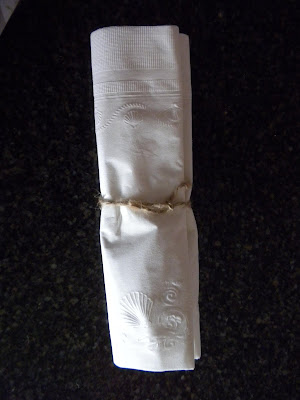 They are just tied in the back of the napkin with a simple knot. How easy is that? 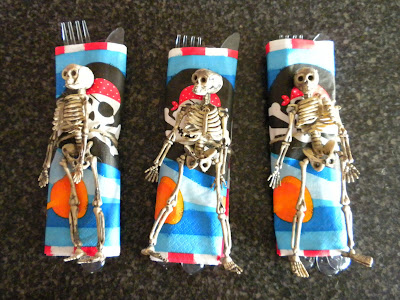 Here are what they like with the napkins we are using for the table.
So, for about 60 cents each I have a cute napkin ring that I can either use again or I can let the kids take home to play with.
I got them all put together and they are now ready and waiting to just be set out on the table. That will save me a lot of time on the day of the party.

My next thing to do is get the goodie bags all put together.

Posted by Joanne Kennedy at 5:17 PM

Joanne you are so creative! These napkin rings are so cute! I can;t wait to see what else you make for Trinity's party. She is so lucky to have you as an Aunt!

PS When you come to NYC you can check to see if there is an opera scheduled for the time that you are here. Check the Met web site. They have a limited amount of "rush" tickets that can be bought a few hours before the performance for $20! It's a fantastic deal!

Your napkin rings look fabulous, great job and such a bargain
Alison

You clever girl!! I love these.. kinda like Pirates of the Carribean... great skills and love how you saved all that $$$$$...Can't wait to see the rest of the party.

Really cute idea! You come up with the cutest stuff!
I joined some Meetup groups...that's why I'm going to all these places.
Hugs, Susan

Very cute! I can't wait to see the whole party.

Your napkin rings are a stroke of genius!
Pam