ABOUT GONE WITH THE WIND ~ MOONLIGHT AND MAGNOLIAS 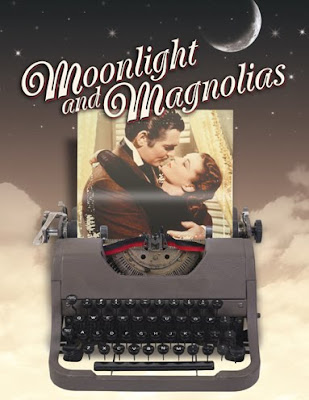 Ever since I went to New York and saw two plays on Broadway I've been obsessed with the theater.

I thought about it and decided that it would be fun to see some of the smaller playhouses around.

So, I went to the Laguna Playhouse and saw Moonlight and Magnolias.

It was a wonderful play. The actors were super and I had a lot of good laughs.

I don't know if you heard about this play or not. I had never a thing about it until I started my search for plays to go to.

It's a comedy. It's based on a true story. It was very interesting too.

It takes place back in 1939 when Gone with The Wind was being filmed.

A man by the name of David O. Selznick was desperate to crawl out from the shadow of his father in law, Louis B. Mayer of MGM. So, he borrowed the money to finance the film from his father in law and was determined to produce a hit movie.

Mr. Selznick paid $50,000 for the movie rights to the book, which was a record sum for the era.

It took years to find the perfect actress to play Scarlett O'Hara. Many famous actresses tried out and was considered for the part before Vivien Leigh was even thought of.

Actress like Joan Crawford, Lucille Ball, Bettie Davis, Katherine Hepburn, Carole Lombard and even Gone With The Wind's own Melanie, Olivia de Havilland took a crack at it. Though none of them fit the Scarlett that Mr. Selznick had in his mind.

Then one day, Selznick's brother brought Laurence Olivier and his lover, Vivien Leigh to the studio. Selznick's crew was filming the burning of Atlanta screen and took one look at Miss Leigh in the reflection of the dancing flames and knew he had found his Scarlett.

However, he was not happy with the screenplay and stopped production of the movie. He feared his screenplay was not filmable and so he turned to famed screenwriter and playwright Ben Hecht to right the perfect screenplay.

Mr. Hecht agreed to give Mr. Selznick only five working days of his time. So, Mr. Selznick fired his director and took Victor Fleming off the final two weeks of directing The Wizard of Oz to direct Gone With the Wind.

Mr. Hecht then told Mr. Selznick that he had never read the book and had no idea what the movie was to be about.

With only five days to get the screenplay written, Mr. Selznick locked the doors to his office and the three men got to work. Mr. Selznick and Victor Fleming acted out the whole book and Mr. Hecht typed away as fast as he could.

Only bananas and peanuts were allowed to be eaten as Mr. Selznick heard that they were "brain" food.

The goal was met and in five days the screenplay was finished and Gone With The Wind went back to filming. It received ten Academy Awards and is still to this day one of the top 10 films of all times.

After seeing this play I wanted to go home and watch the movie again!

One thing I learned is that even in the smaller playhouses there are some great plays to be seen. If you are looking for something to do, check your area. Go support the community and have a few hours of stepping into another world.

Posted by Joanne Kennedy at 4:32 PM

Labels: Gone with The Wind, Moonlight and Magnolias, playhouse, plays

This post is in good timing. Until the weekend, I had never seen Gone with the Wind. Most people are shocked when they hear this, considering it's fame and the fact that I LOVE period movies. I've only gotten through half of it so far, and it took me a little while to get into it, as I couldn't stand Scarlett's character, but now I'm hooked.

So true Joanne! Live theater is a treat, no matter where you live. I never heard so many behind the scenes facts about GWTW that you learned in that play! That was a fascinating.

What plays did you catch in NYC?

RE: I think you'd really like Green-Wood Cemetery! Make sure to visit on a Wednesday as there is a informational trolley tour --check the cemetery's web site!

What fun! I always enjoy going to the theater.
Its easy to get hooked.
Have a wonderful day,
Elizabeth

I am so glad you stopped in for a visit and thank you for your sweet comment. I love the story behind the story in your post. Gone With the Wind is my mothers favorite movie. I used to watch it on TV with her every year when I was growing up. We popped a roasting pan full of popcorn with real melted butter and sipped coke through the whole thing. Thanks for the sweet memory.

Oh how fun! and yes I agree with you that sometimes the best plays can be seen in the smallest of playhouses. I've seen FABULOUS acting from time to time in those smaller vanues. This one sounds so interesting..especially knowing all that went on behind the scenes. I wonder if it will come to Portland?

I love "Gone with the Wind." That picture of Scarlett and Rhett is so romantic. I love going to plays, too.
Hugs, Suan

Hi Joanne! Very glad to hear you enjoyed Moonlight and Magnolias. You probably won't be surprised to hear this, but the most often heard comment after the show is, "Let's go watch Gone with the Wind now!"

And thanks for coming out and seeing a show at our venue. It's great to experience theater of all sizes, from the streets of Broadway to three blocks from the Pacific Ocean!

We appreciate you blogging about the show and hope to see you at the Playhouse again!
--- Meghan (Communications Assistant for Laguna Playhouse)