Yes you read that right! It even says so in the local newspaper. They have pictures and everything. 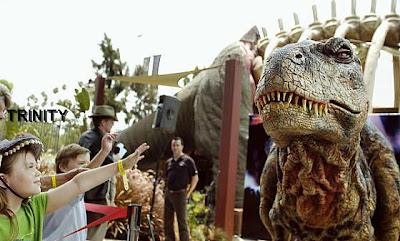 There is Trinity on the left of the picture. She is reaching out trying to touch that dinosaur. What is she thinking! Doesn't she know dinosaurs can bite!

This is what the paper says "The young Tyrannosaurus Rex looked hungry. It paced back and forth, snapping its jaws at anything that moved, swishing its tail like a huge club. Everyone once in a while the monstrous reptile would lean back and deliver a blood-curdling roar!" 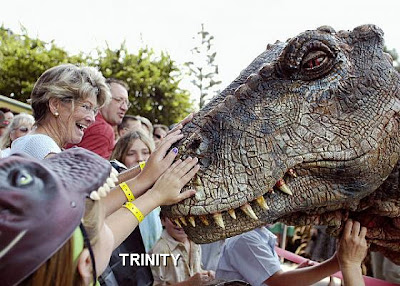 Now if I was there, I would be freaked out. But not my little Trinity. She was so brave, in her dinosaur mask that she wore like a hat. She pet that big old guy like he was her own friendly little dog or something. 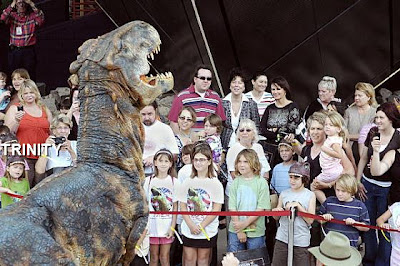 OK so the whole story is, Trinity went with her brownie troop to the Discovery Science Center and they were greeted with a great show preview called "Walking with Dinosaurs - The Live Experience".

There are 15 life-size dinosaurs that represent 10 species. There is even one, gigantic Brachiosaurus that measures 56 feet from nose to the tip of his tail. WOW!

Now I've never been a big fan of dinosaurs but I would like to see what they really looked like. I guess this show is the closest any of us will ever come. They walk, roar and move around just as if they were alive.

The show started in Australia and is now making the rounds here in America. So be careful, if your little boy/girl comes home and tells you they just saw a dinosaur, they may be telling the truth!

The newspaper THE ORANGE COUNTY REGISTER was even there and took the above pictures. First they were on the web site and we were thrilled to see Trinity not only made it in the pictures but they also talked to her and so her name is the article too!

Then today the paper came and low and behold there she was again! The photos were even in color. Now that is not normally what they have. Most of the time it's black and white only.

So my sweet great niece, Trinity, is a news worthy little girl. Oh I hope she doesn't end up like Paris Hilton. LOL

Now tell me, have you or anyone you know, been in the paper or on the news? If so, leave me a comment telling me the story. I would love to hear all about it.

Posted by Joanne Kennedy at 5:46 PM

Joanne, What a wonderful and sweet comment you left me. I was so impressed that you read through my blog. John was such a good man that it is so hard to live without him.. I am sad your brother is going through this. I will pray for him.
Try to take comfort in the fact that God will not take us until our time to go.
Your brother could live for many, many years.
Your post about your niece was sweet.
Sending you much love, Nita

Hi Joanne ~ That's a neat story about your sweet little Trinity! I have a story to share about my brother-in-law. His name is Andy and he won the World Series of Golf tournament last month in Las Vegas. It will be broadcast TODAY & TOMORROW on CBS Sports!!! We are very proud of him and will definitely be watching :) Andy has been in many newspapers & been interviewed by various news stations since his big win. I wrote a post on my blog when he won and linked an article about it. So, that's my story! (Oh, I almost forgot! Once I made the front page of some local paper very far away from where I lived at the time...I was on a date with a guy at a festival and a picture of us was taken and put in their paper. Dummy me...I didn't save it!)

Have a great weekend!

Thanks for the spray painting tips!

Cool! I linked to your giveaway on my blog.

Your right! I really should sell some stuff from Oops. :) Thanks for stopping by!

That is SO cool. I tried to find yesterday's paper today but no luck. Noah thought that was really neat too. The boys missed her at tae-kwon-do today.

How fun! Those dinasaurs look so real! Well, at least I think they do since I never saw a real one - lol.

Hi Joanne, What a neat place. I would love to see them in person myself. Maybe the show will come to my area.

Walking with dinosaurs looks so fun! And how much fun for your niece! We're also in Orange County, and my children have been BEGGING me to take them, looks like we'll have to do it!

This is my first stumble upon your blog... I'll be back!

Joanne ~ Your new header is lovely!

Hello Joanne, I was on your blog site about the same time you were on mine! Thank you so much for stopping by!!! I have to say you are truly an inspiration to me!

Hello Joanne, as I go through my comments tonight I find another one from you, (with a huge :} on my face!) Yes My puppy is a wonderful model. If he models well, he gets more spolied than usual!
God Bless,
Jackie

Hello again, I just now found the comment you left about my Bailey Boy. I understand what you mean about your kitty. I had another one who passed after 16 yrs, Bailey cant replace him, but he fills the void. We have our children but they leave the nest, our kitties are with us until God decides otherwise! Thank u so much for taking the time to leave a comment. Especially about Kitties,
he is my furry baby!
Jackie