HOW MANY OF YOU HAVE ONE OF THESE NEAR YOU? 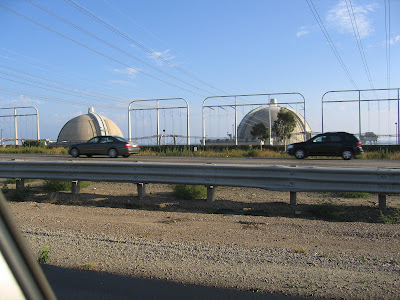 Well my camera batteries are being charged right not so I couldn't take photos of my thrift store finds.

So I thought I would show you this photo. Have you seen it before? Does it look like something you have seen in movies or TV shows? Well it is!
It's the nuclear power plants in San Onofre CA.

I would see these buildings every time I drove to and from visiting with my brother. It's pretty scary if you think about it.

I bet most people don't have a nuclear plant near by that could be a target for terrorist or have a melt down or leak. It would be like Chernobyl, but over here by where I live. Living in CA I wonder how well they hold up with Earthquakes. YIKES!

However, even though it could be pretty scary, I found out you can take a tour. I want to do that one day. Maybe I could get some answers to my questions. 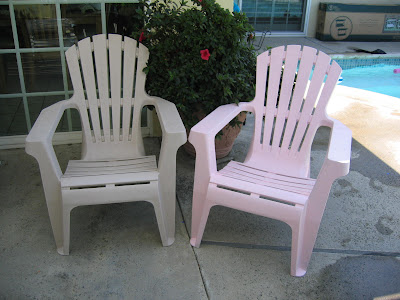 Well on a more peaceful thought here is the chair I painted pink. I think it's much nicer then the before grey color. What do you think?

My BIL put my new swing up, so I'm going to paint that pink too. I can't wait to see it finished.

Now I need to find some cute pink outdoor pillows. I would make them but I don't sew. I wish I had a friend that did. I would be happy to buy the material and even pay her to make me some custom pillows. Oh well, I'm hoping I can find some pretty ones already made.

I made my last trip to the hospital to visit with Gene yesterday. He is finally going home! He is so excited. I don't blame him. Seems like he has been there forever!

He will still have rehab but on an out patient basis.

Yesterday he walked down the parallel bars three times. I had to fight back the tears when I saw him doing that. It's surely only a matter of time before he is walking on his own.

We made plans, that on the anniversary date of his stroke, we are going to go on a cruise to Alaska. We are hoping he will be all better by then but, even if he still has problems we are going. I told him I would push him in a wheel chair if I had to. I think having a goal is good for him. It gives him something to work towards.

I hope everyone had a nice Father's Day and a great weekend. I'm off to read other's blogs.

Hugs to you.
Joanne
Posted by Joanne Kennedy at 6:46 PM

We lived in Oceanside and Carlsbad and San Diego and 29 Palms. I never worried because my hubby worked in Nuclear weapons and he assured me that we were safe. I'm still alive so I guess he was right. Try not to fret about it. I think there are many safeguards built into it.

I love-love-love the pink chair!
I would be freaked out by nuclear power plants.Two words-Erin Brochovich!
Great news for Gene and Alaska sounds fantastic!

Great news about your brother! I am a pink person myself and have looked for patio cushions, etc., in pretty shades of baby pink and raspberry, but never found any. So just today we bought some for our pool area with blue and green. They are still vibrant, but not in my beloved pink. But I guess since my husband does not complain about sleeping in a very pink bedroom, I should let him lounge with his favorite color, blue!

I'm thrilled that Gene is going home. Such a great goal for him to work toward. I will be praying that God strengthens him daily so he will not need a wheelchair on your cruise!
Love the pink!

Love love love PINK!! You just can't go wrong with that color!
So happy to hear about your brother--God's hearing and answering prayer!!

By the way...you've been TAGGED!
Check out my blog for details!
Blessings!
Myrna

We passed by the nuclear plants in San Onofre last weekend on our way to Chula Vista...it does give you a weird feeling just knowing what they are.

I love your pink chair...pink is my favorite color although I seem to have alot of blue in my home these days too.

So glad to hear that your brother will be coming home soon...and the Alaska trip should be great motivation for his recovery. It's truly heart-warming to hear of the special relationship you both share!

Thanks for coming by for a visit. I'm glad that your brother is doing so well.

Jake could be a 1/4 Chihuahua but I don't think he's more than that because his mother doesn't look like one at all. She's much bigger than he is and looks more like a terrier. She's an all over tan color. His daddy was very tiny and colored like Jake.

Jake like to eat cat food, too. Max likes to eat Jake's food and Meekie just likes to eat, period.
She's an excellent rester, and has a bit of weight problem. Is that a calico thing?

Thanks for telling me about the thrift stores. I'll have to check them out. We are hoping to move to Newport or Huntington within a couple of years.

Love the Pink
Scared by the Nuclear Plants
FANTASTIC News Gene is coming home!!
You must all be so so excited

Remember the post I did last week on America's Home Town? Guess what? There is a nuclear power plant just down the road. It helps keep home prices down in the area for sure! And I am not sure who benefits from the power produced...we probably send it to another country to help with their power needs!

It's great to here that Gene is make progress. I would also do better if you dangled an Alaskan cruise in front of me.

Are you going to paint the other chair pink ? or a blue ?

Great job on the pink chair.
Since I am sort of "new" at reading your blog I wasn't sure who Gene was but after reading some of the other comments I find out he is your brother who had a stroke. So sorry to hear that but also very happy to hear he is making progress. Praise God!

Hi Sweetie! I worked for a decade in nuclear power engineering and it always sounds scary to think of what could happen but please know that these plants are designed to take themselves off line at the least little incorrect what-ever blip. We are not like Russia. The terriorist everyone fears are more likely to strike at your local shopping mall rather than try to attack a nuclear reactor. I would be more worried about chemical plants around town before I would be worried about nuclear reactors. There really are safeguards built in. ~ big hug ~ Joy

Love the pink.......
My thoughts on the nuclear power thing is a weird one...but won't go into it right now.......
Glad to hear about your brother and what a wonderful goal....Alaska!!!
I need to keep my batteries charged in my camera and start takig pictures for my blog...hmm, will add that to my list!!!!!!

Joanne, what great news on Gene! How great to plan a cruise - love that idea! The PINK chair looks great!! Can't wait to see everything! I think I read once that every state has at least two nuclear power plants (and some have more)... yikes, huh? Have a good week :)...Donna

I'm so happy to hear that your brother Gene is going home! He has made such a good recovery and I bet he'll work hard to achieve the best mobility he can for the Alaska trip you have planned!

Give him my best wishes!