I know some of you were expecting my story about the Queen Mary today. The truth is, I have not had a chance to go through the 136 photos I took so I could pick out only a hand full to share.

But, I will get that post done in time for tomorrow. 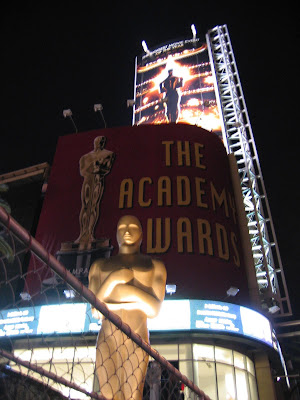 Last night, Glenda and I went to Hollywood. She had never been there before so we decided to go down there. We knew it was Academy Award time but we were not sure what to expect. 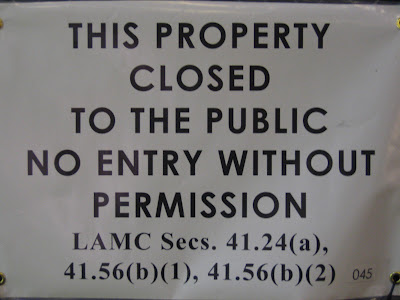 These signs were posted up all over the place. They had the street blocked off and were getting all set up for the big day today.
Security was tight. With guards and police everywhere. 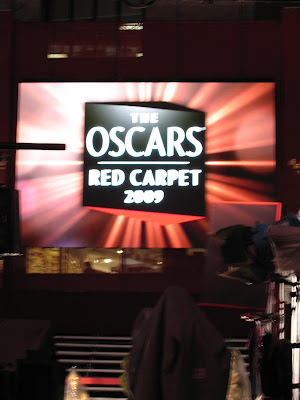 Outside was set up and almost ready for the action that would be there in less then 24 hours. Light checks were being done, flowers were being brought in and the final touches were being finished up. 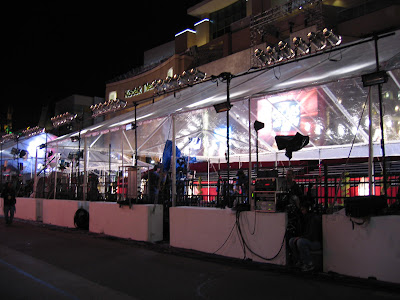 On the street that was blocked off is where all the cameras are. The area where the stars will be walking down and giving quick interviews with the different TV stations, before the show starts. 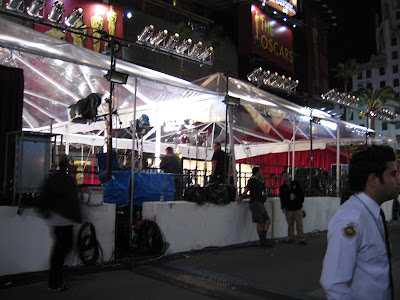 This is where the fan's bleachers are set up. All the yelling and screaming for the stars takes place out here. This is where we get the first glimpse of what everyone will be wearing and who they bring for their dates. 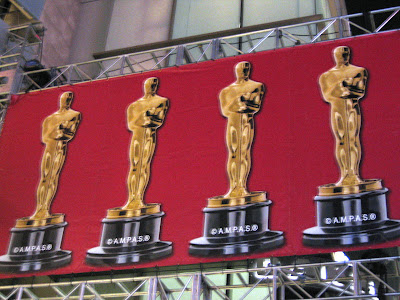 There were golden statutes everywhere you looked. Up on billboards, lining the red carpet, on the large video screens, inside the shopping area where the Kodak Theater is and of course just outside the Kodak Theater. 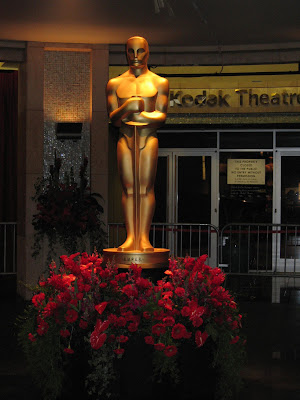 This is the big Oscar that sits just outside the doors of the entrance to the Kodak Theater. He is sitting in a huge bouquet of fresh flowers.
It was very pretty and impressive. 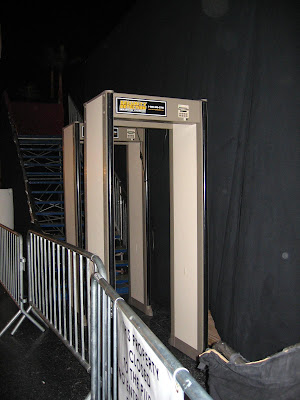 Everyone, who enters the Theater, will have to clear through security, even the stars. 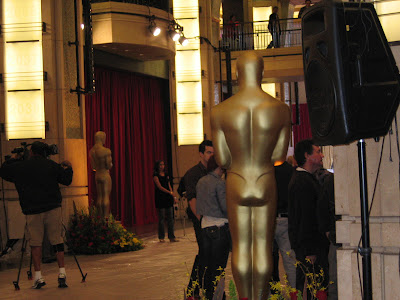 There were lots of people, working hard, as they were trying to get everything done so the show goes off without a hitch. 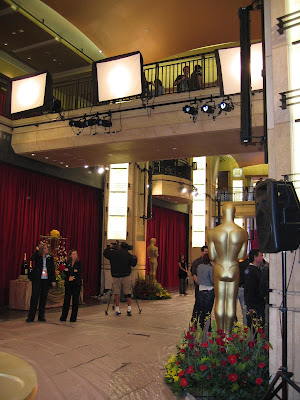 This is where the stars and guests walk just before they get to the Theater but after they are greeted by the fans outside. This area is inside the shopping area.

I'm sure it will be lined with a red carpet by the time everyone gets there. 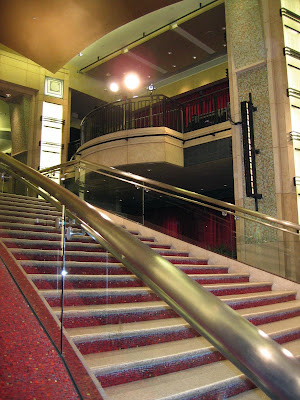 For those who will be seated upstairs, they will be lead to the entrance at the top of these stairs.
Even though I have lived in CA all my life, I have never been to an Academy Award show before. Not even to sit in the stands. My mom and my sister, Patty, has and both have told stories of how much fun they had.
This was the first time I had even been there before the Award Show to see any of the set up. It was exciting to be that close to where all the action will be. To see first hand all effort that is put into the show.
Maybe someday I'll get to go to see the show in person. Until then, I'll be watching with millions of others as we listen to those famous words "And the Oscar goes to..."

Posted by Joanne Kennedy at 7:07 AM

Thanks for the "behind the scenes" look! :)

Hi Joanne
Jessica and I LOVED this post. Thanks for the behind the scenes guided tour. It must be a wonderful event to attend. We really hope that one day you get to go and share the experience with us.
Unfortunately we do not get The Oscars on our TV but we will be able to hear about it on the news and see bits on the internet. We had The Brit Awards last week and The BAFTA's and Jessica watched all of them. She loves award ceremonies.
Enjoy your evening.
Lindsay & Jessica

Wow, Joanne! What a wonderful evening. I lived in California for 29 years and never even got that close to the Academy Awards. :) Also, I have something on my blog for you (after I finish my post) so come on over tomorrow! I will have to catch up on the ghostly encounters below this post. Dying to see your photos (no pun intended). We have our interview setup for our next investigation this next Sunday. I'm excited!!

Oh how glamorous! We never see all the things you showed us. What a great tour! I can never seem to stay awake long enough to hear all the winners. I hope I get to hear today who won. Great photos, you should be working for the Insider!!

There really is a lot of work that goes on to put on the show. One of our best friends is responsible for the communications (tv signal, phone signals) and he's been stressed out for over 2 months! Thank goodness my hubbs doesn't work for that part of the company anymore, or we'd never see him during this time of year. lol!
I hope you had a great time on the Queen Mary. I've yet to take that tour but I want to sooooo bad! I grew up in a home with "activity" and believe me...the skeptics that came in and stayed in our home over night, left as believers the following day, lol!

OMGosh...how exciting to get THAT close! Someday.....someday....you will get to see it all in person...I just know it !!
Many thanks for taking us on this wonderful little behind the scenes!!
xo bj

It all look beautiful Joanne! Thanks for the behind the scenes tour.
I hope you get to watch it from the stands someday --what fun that would be!

Joanne...Wow...I enjoyed every minute of reading this. You did a great job of giving us a view we would otherwise never see. I also have lived here all my life...and have done almost nothing...How I would love to go see it all in person.. :)
One thing gives me second thoughts. LOL TRAFFIC! :)
Hugs,
Mona