Yesterday I was excited because I got to meet another fellow blogger. That's right, Glenda from Many Fond Memories came down my way.

We decided to spend the day shopping and then at midnight we were going to the Queen Mary to do a tour of the Paranormal. Or, ghost hunting on the Queen Mary.

During the day we stopped at a thrift store and then headed to the Orange Circle to do some antique shopping.

We went in several stores, purchased a few things here and there and shared some laughs.

Not once did we think about ghosts being at the Orange Circle. That is until we went into two different stores... 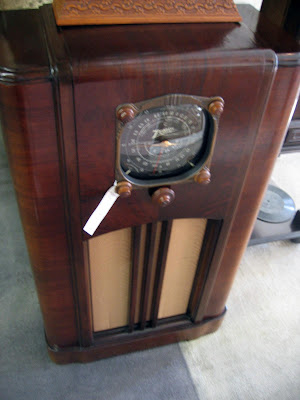 We went into one store that had many many booths set up by different vendors. So many pretty things were there.

We stepped into this one room and while we were talking we both heard this strange muffled talking sound. We both looked at each other and asked "Did you hear that?" We acknowledged we did, laughed and then continued to talk.

Then we heard it again. What was it? Where was it coming from? 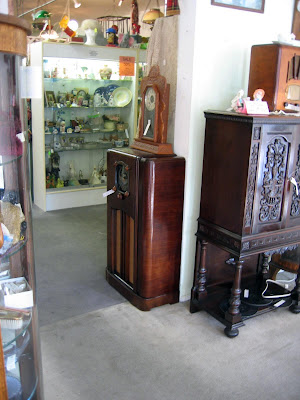 It sounded like it was coming from this radio. So we walked over to it. There it was again. That sound. It was clearly coming out of this radio.

We checked it out only to find out it wasn't even plugged in. I thought maybe it was a reproduction and ran off batteries. So I turned the knobs. Nothing. 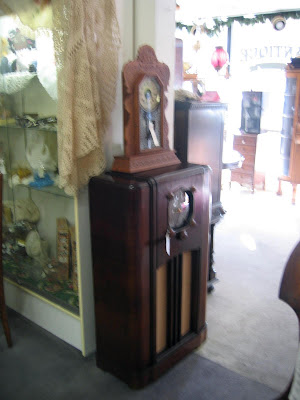 Strange! We heard strange things coming out of this radio even as we stood right by it and was touching it. Yet, it wasn't turned on. Wasn't even plugged in.

Glenda and I just looked at each other and giggled. Then we walked away.
She went to the cashier to pay for her things. I told her I was going to go back to see if I could hear anything again.
This time I didn't hear a thing. So I tried to explain it to myself as maybe it was someone talking near by that we heard.
As I walked away the sound came back. I stopped in my tracks and clear as could be I heard a woman's voice coming out of the speaker of the radio and it said "Carl".
I told Glenda what happened and she asked up at the cashier if anyone has ever reported a ghost in their store. "Yes" was the answer she got. In fact, they even had a newspaper article about Paranormal Investigators that came there.

They told her we "had to" go downstairs. So of course we did. We had no idea what to expect down there or what stories had been told before. 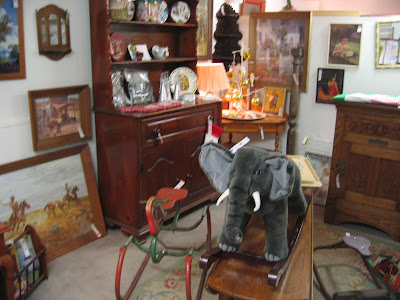 At first I didn't understand what they wanted us to go down there for. I fully expected to see an area set up where they had a speaker set up to the radio and a camera to watch the people freak out. You know, sort of a "Smile, you are on Candid Camera" type of set up.
But there wasn't anything. 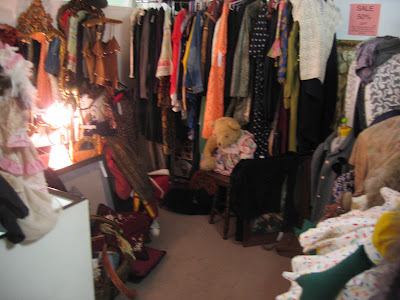 Then I came across this space. Lot's of vintage clothes. "Nice", I thought. Then I saw a little girl. She looked to be about 5 or so. She had blond curls and was in a dress. She was playing in the space and smiling as she went amongst the clothes.

I wondered where her mother was. I looked around but didn't see anyone anywhere near me. I turned around. I was going to ask her where her mommy was. Only there wasn't a little girl there anymore. 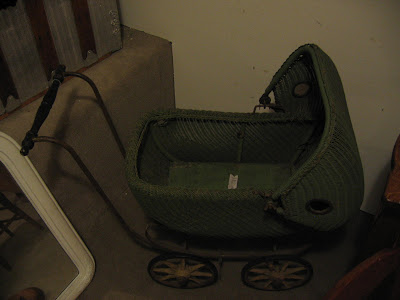 In the area where this old stroller was, Glenda, got a strange feeling and even had to walk out of the space. She didn't see or hear anything. She got a strange feeling.
We went back upstairs. Spoke to the workers and told them what we saw. Only I didn't tell them about the little girl. I had told Glenda though.
I was more intrigued by the radio then the little girl. That was until one of the ladies said there have been reports of a little girl following people downstairs. Glenda and I just looked at each with eyes wide open. Was that the little girl I saw?
The lady that worked there asked if we would show her the radio we had been speaking about. So we took over and was telling here where we were standing and then all of a sudden...there was that noise again. We all heard it this time.
The worker looked like she was freaking out. Her mouth was open and eyes were about ready to pop out of her head. She just kept saying "I heard it. I heard it".
No one knew who Carl was though. 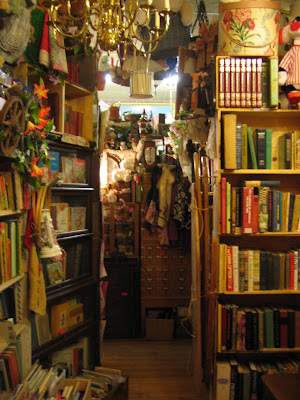 We also had gone into this shop before we stopped in the last one. This place was filled from top to bottom with so many things you couldn't take it all in.
We just walked through sort of quickly. 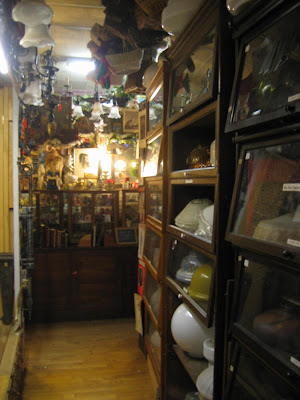 As we got to the back area I started to get a strange feeling. Like someone was there that didn't really want us to be there. Not really scary or a mean feeling but more like a crotchety old man was there and didn't want to bothered with anyone.
Glenda came around the corner and I told her "I have a feeling that if we were taking pictures in here we would be getting orbs.
She validated my feelings by saying she felt like someone was pushing her along and she saw (not with her eyes but as a picture in her mind) an older man, hunched over, dressed in a blue shirt and khaki pants. Sort of a "crabby old man".

So we took our cameras out and started to click away before we left. 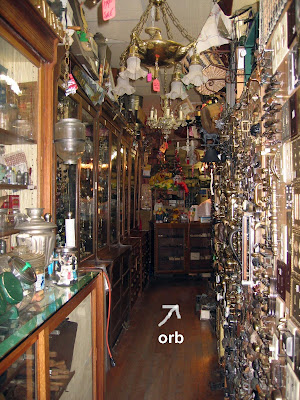 At first I thought we didn't catch anything. Then I noticed this photo in the same spot I had felt strange. There was an orb.
You may need to click on the photo to blow it up to see it.
While we were in the other store Glenda asked the workers if they heard anything about the store where we had just been. Nothing really. Then one of the girls said the owner had died not to long ago.

Glenda asked what he looked liked. Asked if he was the crabby old man. They answered "Yes, you know him?" Glenda just said "No, we have never met him but that is who we had just had a run in with."
We then went to go grab a bite to eat. Strange things were going on. We both agreed. Nothing scary really, just strange. Was it all in our heads? Were we just trying to see and hear things. We did not think so because the worker also heard the sounds. We agreed, something was there in those stores. We just didn't know what.
At midnight we went to the Queen Mary and went with a group to go search for ghosts. The Queen Mary is known for being haunted and has had many many sightings there.
We met up with a group of around a dozen people and a well known Paranormal Investigator and went off for several hours on the ship. In places not open to the general public. Places that were known to be haunted. Where people had died or been held captive as POW's durning World War II.
You will have to come back tomorrow if you want to hear that story though. I think you will enjoy some of the pictures and things captured on film.
Until then, be careful...you may not be alone.

Joanne, what a day you two had! I can't wait to hear about the rest of it. I'll have to share some of my 'orb' and stories some time. And I LOVE that cookbook holder you got - holy cow, what a GREAT deal!!...Donna @ An Enchanted Cottage

Miss Joanne~ Oh my, GHOSTS....You had me glued to my screen and seat. I was captivated as your story unfolded. It's always easier to be ghost busting with a friend. Did you ever find out if the store owner (that died) was named Carl? I can't believe how calm you were when you saw the little girl. I probably would have ran screaming like a little girl out the door!!!!
Have you ever watched Ghost Hunters on sci-Fi channel? They investigated the Queen Mary and got some pretty spooky results. It's my favorite show!
I've got to go tell my bloggy friend to come over and read your story. She's a GH fan too. I will be back for part two....even though I should be working on a new post,LOL! I think you should go back and record the sounds coming from the radio.
In the words of the cowardly lion..."I do believe in spooks,I do,I do,I do" (TeeHee)
Sweet Wishes,
Sara

Oh how awesome! I SO wish I could have been there.

Like Friday. We were at a funeral, at the graveside. Sadly, the lady who passed away was not there, if you know what I mean. But a man was, standing about 10 feet behind me and off to the left. Watching me and the service the whole time. He knew I knew he was there.

Which reminds me, I'm not sure now if I ever answered your last email. Guess I better go check on that.

Anyway, sounds like a wonderful day. Can't wait to hear about the Queen Mary!

Wow,creepy. I think I'm going to think of this story every time I go to antique shops. Sue

Wow! "Sounds" like you had some incredible experiences!! I have had encounters also and I think it is real. I have some stories I could tell!
I'm so glad you got to meet Glenda and have some fun!! What a great time you must have had!
I'll be waiting for more stories and photos.
Hugs, Sherry

Oh, it looks like fun. I could have sworn I left a comment earlier thanking you for the "behind the scenes" look at the academy awards, but I don't know what happened to it. Hope you are having a fabulous week after your eventful weekend with friends. :)

oh my! Too scary for me! I would ahve run out of that store so fast.

You are brave Joanne!

That freaks me out!