DO YOU BELIEVE IN GHOSTS?

Do you believe in ghosts? Well if you do, and even if you don't, you can take a tour on the Queen Mary in Long Beach CA and go searching for them. 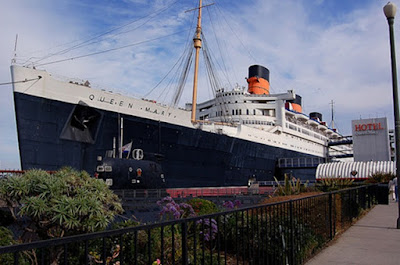 In two weeks, Glenda from Many Fond Memories, is coming down my way for a few days and we are going to take the tour.

I'm looking forward to this. I've never searched for ghost before but this should be interesting.

The Queen Mary has a Paranormal Investigation Tour that is lead by a psychic. They also provide you with equipment and "Tools of the Trade" to aid in your search. 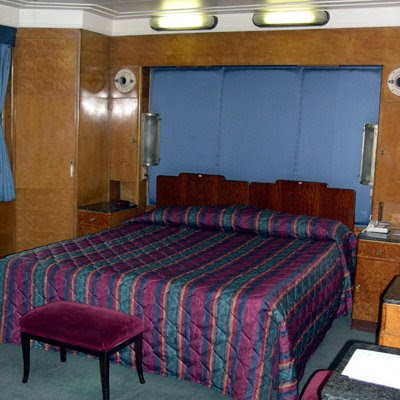 The tour is at Midnight on Fridays only. The amount of people are limited.
You are taken to areas of the Queen Mary that have had several reports of being haunted in the past.
Places not open to the general public.
Rooms where some have died. 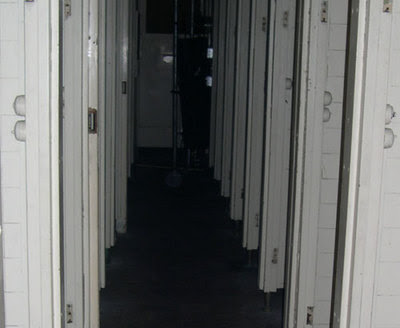 Also, the women's dressing room off the 1st class swimming pool.
It is said to not only be haunted but also, several well known psychics believe, there is a vortex there.
A vortex is said to be an opening between this world and the after life. 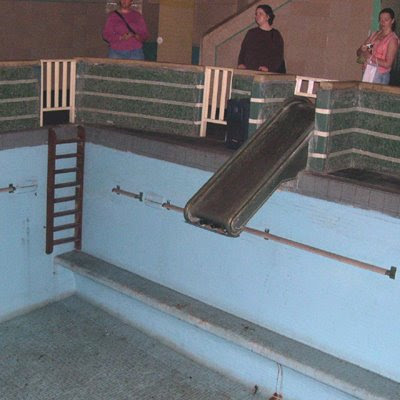 The first class swimming pool is said to be where a little girl is often seen, heard and felt.
You also go to where the Prisoner of Wars were held durning World War II and the engine room. Both are the places of several known deaths.
Now I can't say for sure there are ghosts but, I can say I have lived in several places that many unexplained things have happened. Things that were experienced not only by me but by several others.
I've taken pictures where orbs have shown up. Yes, some say orbs are nothing more then just dust floating in the air. Perhaps.
But maybe, just maybe there are ghosts. If there are, I sure hope we come across them on the Queen Mary Tour.
So do you believe? Have you ever had any unexplained things happen to you before? If you have, tell me about them.

Posted by Joanne Kennedy at 8:17 AM

I think that will be quite exciting and fun!

You will have a lot of fun! I got to stay over night on the Queen Mary when Disney owned it. I have always had a thing for ocean liners. I'm thinking about going to the Scottish Fair on the QM. My heritage is mostly scottish, Irish and English.
By the way, I've lost 7 lbs. and I'm doing better this week in spite of the stress about the house. Not knowing drives me crazy. I hope we will still get to move.
Hugs, Susan

Oh how fun, Joanne! You'll have to tell us about it. I have to tell one an experience I had there. I spent my wedding night on the Queen Mary. As my husband (now ex husband) and I were walking down the corridor to our suite I clearly felt a tap on my shoulder and someone call my name. It was so clear I whipped my head around thinking there was actually someone there! This and living in a haunted house in San Pedro, CA has led me to be a part of a paranormal investigation team here in Oregon. :)

I get butterflies thinking about the trip and the experience we are going to have.

I am gearing up for the Ghosts.

Well that is my kind of tour ... I can't wait till you blog about it after you've gone!

It's funny, I'd never gotten orbs in any of my photos until one day a few years back when my sister and I were able to visit an apartment we'd lived in when we were kids (that my mom loved). So in my head, I asked mom (who had died about eight years earlier)to join us at the apartment that day. Well, I had so many orbs in those photos - especially one photo of my daughter, who was with us that day... There were orbs all around her. I swear my mom came and brought my grandparents, aunts and uncles, and they were all clustered around Amanda.

You know, Joanne, I may just do a post about orbs sometime and share some of those photos - I love this topic!...Donna @ An Enchanted Cottage

How fun! You must share how the tour is. I've been wanting to go on it for years, but never have. If it's a good one,I'll spend the $$$ and go.
yes, I do believe in ghosts. I grew up in a haunted house and we even had individuals come over and stay and leave "believers". It can be scary but after a medium came in, and we learned who our ghost was, it was just not scary anymore, but rather sad. He turned out to be the spirit of a young man who'd lived in the home prior to my family. His happiest times were in this home so that's where he returned. We would find wet footprints around the pool area when no one had been using it. The water in the bathroom would go on and off, toilets would flush. Things would fly across the room, cold spots, and I actually had physical contact with it. I had cut my hair from waist length to shoulder length and he must hot have liked it, because when I went to my room that night it was so cold you could see your breath. I acknowledged him and felt a tug on my hair. I chuckled and said "oh, you don't like my hair?" and he actually tugged it harder. I asked him not to tug anymore, but later that night my hairbrush and spray were knocked off my dresser. It took a few days for him to get over my cutting it, but at least he calmed down. He's still in the house but not as active as before. My brother still "sees" and "feels" him occassionally.

I hope you have a fun time on your ghost adventure. I would enjoy it. Maybe someday I'll be able to take the tour.

Have a happy day

Oh Joanne, I am so jealous. I saw this boat on Ghost Hunters... it may really scare you. What a great opportunity. Yes I believe in something here.. spirits that get left behind or maybe just a feeling left behind. I've had two people die in my house.. my husbands's grandmother, Dorothy and his cousin.. Dottie,(also Dorothy).. creepy huh??

Oh what fun!! I know are things that cant be explained!! laurie

Fun. I toured the Queen Mary many years ago as a young teenager. I had never heard the rumors it is haunted. Please be sure to blog about your tour and what you find. Should be interesting. Are you scared?
Nancy
www.basketmasterweavings.blogspot.com


I took my only cruise on the QM2 for a special anniversary...it was wonderful!

Sounds like a fun trip! They did a show (probably the Travel Channel) awhile back...wow...if you are not a believer, some of the things that happened would make you be one (or scare the wits out of you!).
Have a great time!

This is so strange, Joanne but go and take a look at my post. :) I thought it was ironic after seeing your post today.

I would love to take a tour like this. I am not sure if I believe in ghosts or not..but I know that I have experienced some strange and unexplainable stuff before. I have also been in places where I just felt something was there. It is a weird feeling! I hope you guys have a lot of fun!

Hi Joanne,
I'm here from Michelle's blog. You're going to have a blast with Glenda, how great! I have been to the Queen Mary years ago (nothing happened) but it was very quiet with an eerie feeling just knowing the history. Love the Winchester Mystery House too & took a tour at midnight when my cousin worked there years and years ago. Have fun!
~Tracie

Oooh, that would be a lot of fun. I was on the Queen Mary back as a teenager. I never saw or heard anything weird but had that certain "feeling" I get.

I have to laugh at your question. "Believing" is an understatement to me. I live with them every day, but don't talk of it much...I'm afraid it makes me sound like a nutso. LOL

Have fun! And be sure to report back to us on everything that happens.

Hi Joanne
I didn't know Queen Mary had this tour. That would be so much fun! I think! But then again, I am afraid of ghosts, because of my cabin in Big Bear.
Can't wait to hear all about it after your tour! You brave girl!
Love, Ann

Sounds like fun, Joanne. I've stayed on the QM many times, in the late 70s/early 80s, when I still lived in So Cal. The ship itself is amazingly beautiful ... I think they used something like 40 different exotic woods in the public areas, hallways, and guest cabins. Disney changed quite a few things, but wasn't able to change anything historical, but we stopped going there once they took it over ... what had been a very romantic close-to-home getaway was suddenly populated with Disney characters, Disney gift shops, and actors dressed like WC Fields, Mae West, etc.

I hope your tour will include the Queen's ballroom/dining room area, which is gorgeous. The empty swimming pool is kinda spooky anyhow due to its age and location, and there are lots of wonderful non-public nooks and crannies to explore.

Yes, I do believe. I spent a couple of nights on the the Queen Mary around seven years ago. It was a work celebration and was great fun. I especially felt a strange presence in the hospital ward down stairs. It's a beautiful boat with many memories. Have fun.
Mumzie

We went on one of the ghost tours on the Queen Mary a couple of years ago. We went on the one that's set up like a haunted house with the lights and sounds and special effects. My kids were so scared they bawled and everyone looked at us like we were horrible parents... LOL

I really enjoyed it though. It's an amazing ship. We wandered around it for hours after the tour.

I know I am a little "late" in commenting on this post but I was thrilled to find it. I do believe in spirits, ghosts, the afterlife. I have seen my Grandfather, stand at the end of my bed, only to have my sister (who lived away from me) tell me of her exact experience with him. I have seen bright lights after my grandma passed away, and most recently my 3 year old nephew laughs and says that my Dad who passed 5 months ago is with him and laughing. I do believe!