THE MYSTERY OF THE HAUNTED CAMEO 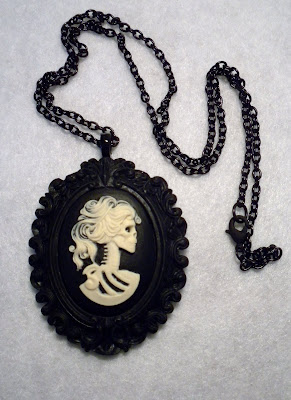 The year was 1817. Lilly was a well loved young woman. Everyone who had ever crossed the path of this beautiful 19 year old was in awe of her. 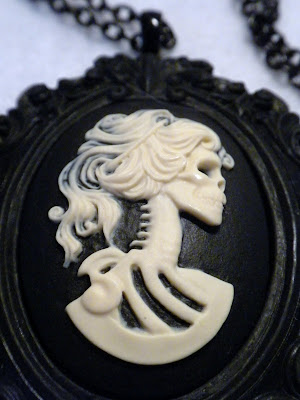 Her hair was long and a lovely shade of chestnut brown that would shine when the sun hit it. She had beautiful blue eyes that sparkled when she smiled and she was always smiling. 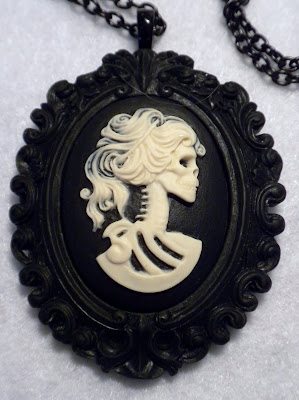 It was just a week past her birthday when a mysterious handsome man rode into town and caught her eye. He quickly started up a courtship and lavished her with many gifts.

Winning her heart, a few months later he asked for her hand in marriage. Of course her wealthy father said yes. This man was just the type of husband he had hoped she would find. 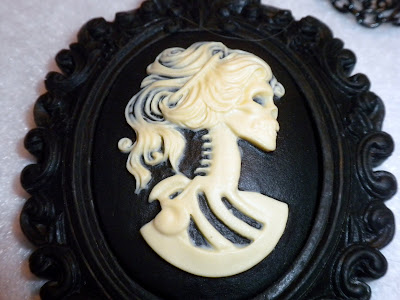 When he asked for her hand in marriage he presented her with a beautiful hand crafted cameo that was in her likeness.

Lilly, agreed to be his wife, without hesitation. She put the cameo on her neck and never removed it.

Once wed, Lilly soon discovered her husband was not the man she thought he was. She found out that he was actually a wanted man. He was wanted for murder. They claim he had killed his first three wives. Three wives Lilly had never known about.

She confronted her husband about what she had discovered. He was none to happy to have his secret exposed. 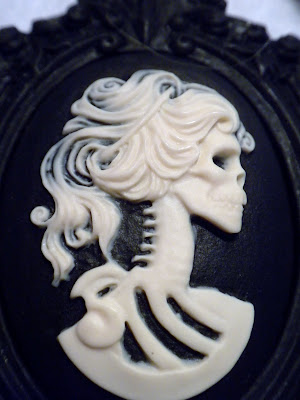 While searching for her they found her cameo necklace, that was given to her by her husband. It was laying face down in the mud not far from where they lived.

Her father picked up the necklace and turned it over. Much to his surprise, the cameo had a different look to it. It was still in the likeness of his beautiful daughter. Only now it took on a haunted skeleton appearance.

I discovered this cameo in an auction house in a dusty old farm in England. It is said to be haunted with the spirit of Lilly who, even in the after life, is still searching for her beloved cameo.

OK, so none of this is true. But, it's what I thought of when I first saw this necklace (on Etsy at SerendipityLicious) and I just had to have it. I love it! Perfect for Halloween!! Don't you agree?

Posted by Joanne Kennedy at 3:02 PM

Oh man! I was so into your story! I would have spent hours looking up that tale had you not said you made it up! LOL
What a cool cameo!

I sooo enjoyed your story! I was totally thinking what a cute story you made up, then when you said you bought it at an antique store I was thinking, OMG! Is it true? LOL! You got me! Great story and such a neat cameo!

What a great story...very suspenseful!!

Oh! You aren't having a giveaway with this necklace the prize??? LOL I'm teasing...you would have to pry it out of my cold dead hand!!
OH! Did I say that???

Hugs to you my friend!
Mona

You are such a good story teller!
I saw your picture on the Bakerella site under the Costa Mesa signing. I really wish I could have seen her in Santa Monica. Hope you are enjoying the rain!