I came across this article that was written by Gina Kim. I loved this story and wanted to share it with all of you who didn't see or hear about this yet.

I would love something like this to happen to me. It gives me hope and makes me want to go hit up all the antique and thrift stores. 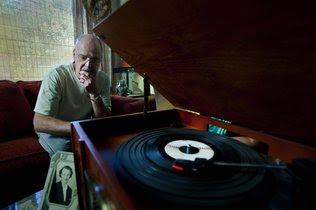 The lick-on label was unmistakable. Paul Campfield was reading his mother's name and the address of his childhood San Lorenzo home.

And it meant the old records he picked up for $2 at a Sutter Creek antique shop had once belonged to her, although she died in Redding in 1979.

What are the chances? 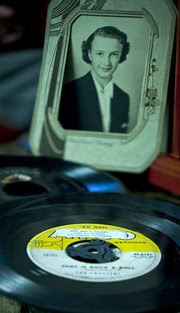 The 68-year-old Sacramento man never knew what came of his record collection owned by his mother, May O. Rainey. He simply remembered how they fit into slots in a compartment beneath the oak RCA Victor console with the automatic turntable.
"It's just a thrill, a genuine thrill," said Campfield, a retired engineering technician. "I think my mother is still with me."
It was just the two of them – a mom and 4-year-old son who left Redding for an Alameda housing project in 1944 when his mother got a job as a secretary for a naval officer.
Campfield remembers when she brought home his soon-to-be stepfather, Fred Rainey, a World War II veteran with a penchant for double-breasted suits whom she'd met at a church dance.
"Mom introduced us and he put out his hand and my hand was swallowed up in his," Campfield recalled.
The couple wed in 1946 and moved to the Bay Area town of San Lorenzo. It was there Campfield remembers music tinkling throughout the house.
The couple would dance from the kitchen to the living room and back into the kitchen, swinging the jitterbug, waltzing, or bopping to that new-fangled rock 'n' roll.
"Fred was a real romantic and he loved to wine and dine her," Campfield said. "Once a month, they would go out to dinner and go dancing."
The two belonged to a big-band-era dance hall called the Merry Mixers, and members would bring records to play there, Campfield said. Members labeled the records to make sure they were returned.
The couple moved to Redding in the early 1960s after Rainey was transferred by Bank of America, Campfield said. They kept dancing until Campfield's mother died of cancer at age 59 in 1979. Rainey died two decades later.
Campfield has thought of his mother regularly these last 30 years. She pops into his head when he hears certain songs, dances the waltz, or eats a chocolate divinity.
He bought an old-style record player from JC Penney a few years back, and earlier this summer, popped into Old Hotel Antiques where he picked up a dozen vinyl 45s.
This week, he pulled them out of the clear plastic bag and that's when he noticed his mother's block-lettered address label on "That is Rock and Roll" by the Coasters. It was on the Freddy Cannon record, and the Elvis Presley one, too. It looked like there once were labels on the Lloyd Price, Alvin Tyler and Fats Domino records as well.
"It's really something," said Merrianne Giannini, a clerk at the antique store, who guesses the records came from Denio's in Roseville.
"There's a reason for this," Campfield said. "I don't really believe in ghosts, but who knows."

Posted by Joanne Kennedy at 6:16 PM

I saw this story on the local news station...such a great story! It's amazing that they records came back to him. Thanks for sharing. Mumzie

This brought tears to my eyes! Thank you for sharing. What a wonderful sory!

Love these stories! Totally believe those who have passed are stil influencing things here. Cool!