NO GHOSTS BUT LOTS OF FUN IN THE SUN

I got an email telling me the ghost hunting investigation was cancelled. So I have no ghost stories for you...again!

But, I do have another fun day in the sun. I took my two dogs to the Doggy Beach. Did you even know they have those? 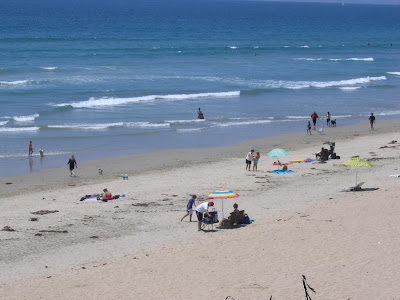 Here in California dogs are not allowed on the beach at most places.

However, in between Huntington Beach and Bolsa Chica, there is a lovely stretch of beach that has been zoned to allow people to bring their dogs. 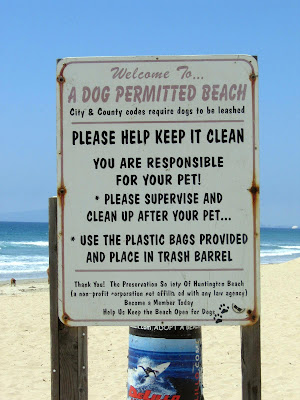 There are rules though. You must pick up after your pet (it did look like this was obeyed) dogs are to be kept on leashes (this was not followed by most dogs). 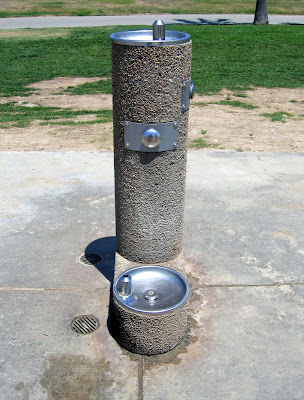 The beach provides little blue bags to pick up after your dog, which is a nice thing for those who forgot to bring their own bags.

They also made a little doggy drinking fountain next to the regular fountain. Yes, lots of dogs drank from it too. 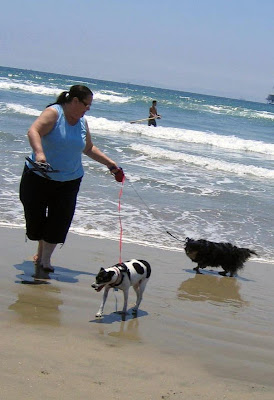 It was Zeke's (black and white dog) and Elton's (black dog) first time going to the doggy beach. I was excited to see how they would act.

I did bring them before in the winter time but we just walked along the sand. Today, I wanted to see if they would go in the water. 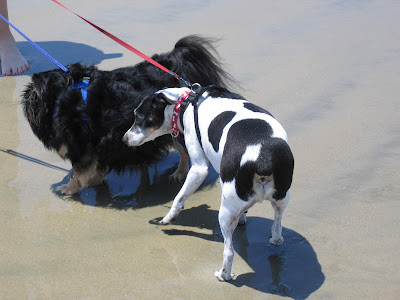 Zeke didn't seem to like even being down by the water. Elton was OK. He had no idea that water would even come up and get him. 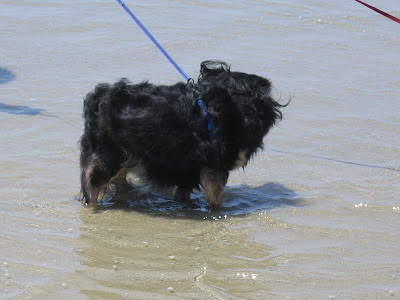 The first time a wave came in, Elton just stood there. It was like he froze. What in the world was going on? How did his paws just get wet? Should he run? Should he stay there? He didn't have a clue. 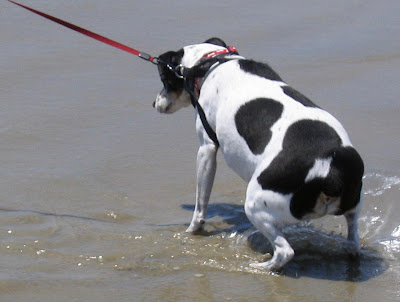 Zeke, on the other hand, hated it! He doesn't like water. He hates getting baths, he hates when it rains and he hates have the hose get him wet. So naturally he hated the water at the beach too.

He backed up as quickly as he could and wouldn't go near the water again. 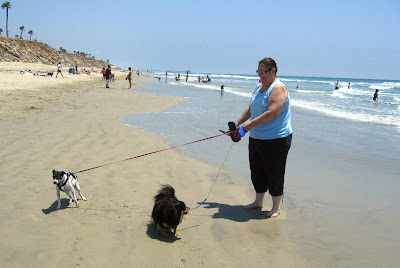 I tried to get them to go back to the water. Zeke just refused and Elton wasn't to sure yet if he liked it or not.

Elton normally loves the water. He loves to run outside as soon as the rain starts and he puts his head up and almost dances in the rain. He couldn't care less if the hose gets him wet. But, he isn't to thrilled to have to have a bath. I don't think because of the water though. He just hates to smell clean. 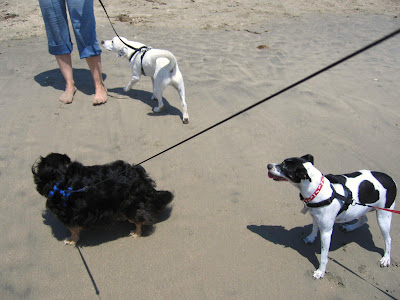 They did meet a few other dogs who were not to thrilled with going in the water either. 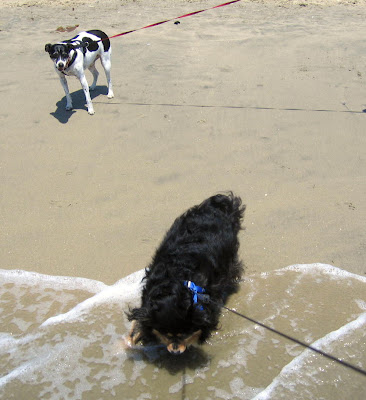 Then Elton decided to give the water one more chance. He didn't seem to like it much. I think in time he would though. He just couldn't figure out how the water was coming in and then going out.

I think the feeling of when the waves go out and he felt the sand moving under his paws was a bit strange to him too. 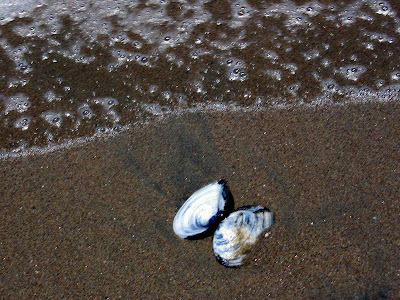 We gave up on walking in the water and just walked along the shore. The waves were bring some "gifts from the sea" up for us to see.

This shell still was attached and had both halves. We saw some other pretty shells, rocks that had pretty pink in them and even a sand dollar.

We left them all there for others to enjoy. Didn't take any of them home. 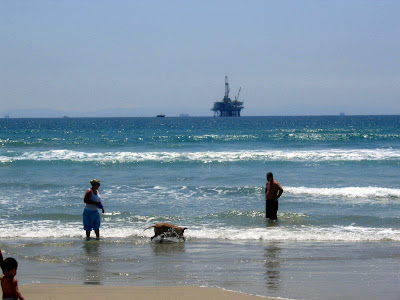 After walking for about another hour, we decided it was time to go home. So we said good bye to the other dogs and headed to our car.

We then went for a drive along the coast just to enjoy the scenery as it was such a pretty day.

Once we got home both dogs got a bath and now they are sound asleep. I wonder if they are dreaming about their fun day at the beach?

Posted by Joanne Kennedy at 4:32 PM

Oh, honey, those are cute! I gotta tell ya though that my son and his wife live in Moreno Valley and they take their dogs out for walks and as soon as they hit the house from the walk they head for the laundry room where they KNOW Alice will give them a bath. She loves and adores dogs but they have to have a bath after every walk. It is sooooo funny to watch them. The alpha dog is about 1/4 the size of the other dog and the big dog knows who is "queen" in that house. Truly funny to watch them, sugar.......
xoxo,
Connie

Sorry about the ghost thing. That's something I would love to do!

Cute pups! We have three border collies, and luckily in our town, we can take them to the beach. We have five big lakes in our city limits. They like to swim. We leash them and have 30-foot leashes for beach play. We also always have baggies stuffed in our pockets!

Looks like fun. Wonder how my girls would act ?

They like to chase the water from the hose.

The weather down there looks inviting.

That is a fabulous way to replace your prior plans! I just love the beach! You and I are so lucky to live so close to our beautiful beaches here in So Cal! :)

I know I am just going to love following your blog!!! :) I grew up in Orange County, lived in Irvine, Newport Beach, Dana Point, Huntington Beach, etc etc. I lovvvved watching the ocean and I miss it very much. We have lakes and we have the Puget Sound but it is NOT the same as the ocean. I yearn to move back down there.