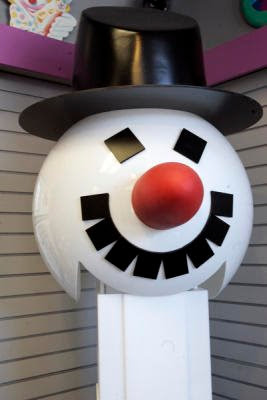 Did you hear about the 7 foot 10 inch PEZ Snowman that is causing such an uproar?

It made the Guinness World Book of Records as the largest PEZ dispenser yet, the PEZ Company wants it destroyed. 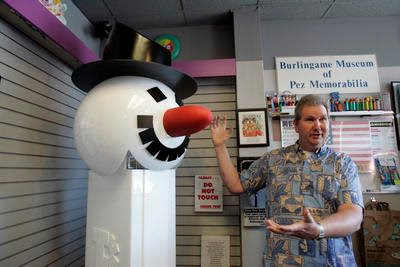 A man in Burlingame California has a PEZ Museum and has every PEZ dispenser ever made on display. He also sells PEZ items. He has been in business for 14 years.
Two years ago he built this large snowman PEZ dispenser. You can pay $14.99 and when you lift the head of the large PEZ Snowman a regular size PEZ candy dispenser comes out along with a certificate that says it came from the Worlds Larges Dispenser of PEZ. 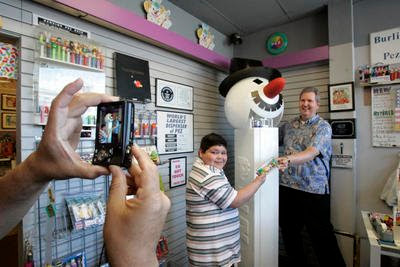 People love this super sized PEZ Snowman and come from all over to see it, have their picture taken with it and purchase their very own PEZ snowman.
Well, the PEZ company heard about this life sized PEZ Snowman and filed a law suit demanding the Snowman be destroyed and all the money the museum made over the last 14 years be turned over to them.
Now I know PEZ has a right to say who can and who can not use the likeness of the PEZ dispensers but come on! Can't this give this man a break? I mean really!
After all this mans business is to sell PEZ dispensers. He came up with the idea of obtaining every dispenser made and then putting them on display and turning his office space into a museum. Yes. he makes money from that but by having the museum he is also getting lots of people to purchase PEZ dispensers for their own collection. So PEZ is making a lot of money off of him.
What do you think? Do you think PEZ should leave this man alone and be thankful he has found a marketing tool to sell PEZ items for them or do you think they should stand firm and demand he destroy the large Snowman PEZ and turn over all the money the museum made over the last 14 years?
I've had a PEZ collection for years. I honestly don't even know how many I have or what ones I have. I know I have more then one large plastic box full. I have them in storage and have not looked at them for years. I wonder if any of them are worth anything. I never open my PEZ. I just collected them.
I think they are cute but I never really cared for the candy that came with them.
Did you used to get PEZ dispensers when you were a kid? When was the last time you got a PEZ? Do you remember what it was?

Posted by Joanne Kennedy at 2:45 PM

My daughter is 28 and I still give her Pez every Christmas. And
Santa brought them when she was younger! The company needs to find something better to do. They should be honored someone was clever enough to make a huge dispenser.

Gosh, PEZ! Lighten up! Let the man have his gigantic PEZ dispenser, geez! That thing is a delight to look at! They should hire him to make one for them!
I wanted to let you know that I'm having a giveaway! Be sure to come on over and join in!

Booo to PEZ! They should be awarding this guy for being such a loyal customer and PEZ lover! Bad PEZ! Booo. I hope that everything works out for this guy. That is a cool snowman dispenser!

They should leave him alone! I feel so bad for that man! He was really doing pez a favor!

That is the craziest thing that I have ever heard! They need to leave this man alone! Some people and companies are just SELFISH! I bought Pez snowmen for stocking stuffers this past year. Now when I see them, I will think differently about them and I might not even buy them anymore. If they win the suit and he has to pay them, I wouldn't sell their product anymore. As smart and creative that this man is, he could come up with his own candy idea and market it. The candy would probably taste better too! He could call it "Zep" LOL