ANOTHER CHANCE TO SEE A GHOST??? 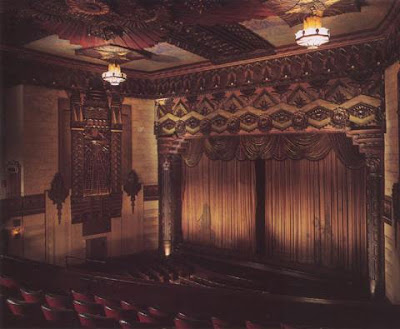 Tomorrow night I am going with my Paranormal Investigating group to The Warner Grand Theater in San Pedro.
It's a beautiful theater that opened up on 1/20/31. To this day it still shows movies that you can go enjoy. Only now they show only Classic Films there.
The theater is said to be haunted. People have claimed to have seen ghosts, heard voices and felt things while at the theater.
One ghost is said to be that of a man that used to be the Projectionist. He loved his job very much while he was alive and it is said he still enjoys the theater today.
Several people have sat down in a seat and heard "Get off of me" only to look and see no one sitting in the seat. 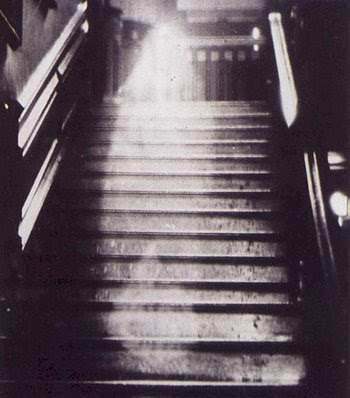 I would LOVE to be able to capture a great ghost picture. Something like the one above. Wouldn't that be fun!
Recently there was another Paranormal Investigation group that went to this theater and when they didn't come across any activity some started to get bored. They started to talk quietly as they still had their recorder on.

It wasn't until they left and listened to their recordings that they heard "Don't go" and then just before they left they heard "Get Out".
I believe there is a My Space page that has this on line so you can listen to it yourself. I didn't want to listen to it before I go so I didn't look it up on line.
I like to go on the investigations without knowing to much about what others have heard and seen because I don't want my mind playing tricks on me while I'm there.
Of course I'll let you all know what we hear and see on Sat. I'm hoping I have an exciting story for you all.

Posted by Joanne Kennedy at 5:36 PM

That sounds like fun but a bit "spooky" to me, honey. Not sure I could stand the suspense and would probably not want to be alone at night for a couple of weeks, sugar. Have fun though.
xoxo,
Connie

Sounds like a fun, but scary trip!!! That would be awesome to get a ghost picture. Safe travels no your t

I would LOVE to go with you!!

I would love to do this, too. I'm sure I'd be a little nervous but it sounds like fun.
Hugs, Susan