NO WE DON'T HAVE GOPHERS! 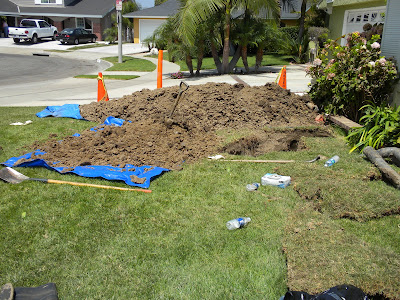 Our front yard is a mess right now. It has two big piles of dirt and two deep holes.

No, we don't have gophers. We have a broken pipe! 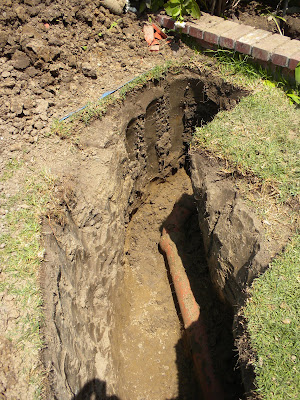 Yesterday we called the plumber out because the drains inside were draining slow. We didn't know why. We figured they would just clean out the pipes and be on their way. 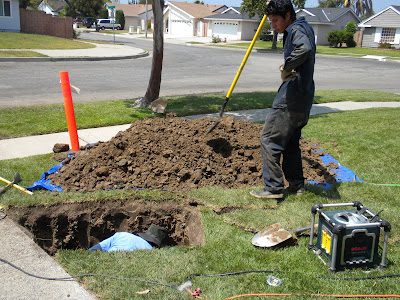 Well that didn't happen. They did try to clean out the drains but the blade on the snake they were using broke off. So the camera came out.
They were able to go through the whole area of pipes out to the street. Turns out the pipes are old and had several cracks.
We agreed that they would flush out the pipes and then soon we would have the pipes replaced. 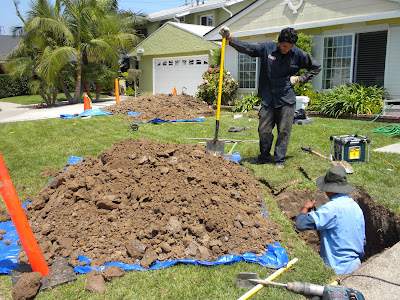 As they flushed out the pipes, or I should say tried to flush out the pipes one of the guys noticed the water wasn't going though them as it should.
So out came the camera again. This time they noticed one of the pipes that had a crack came completely apart and sunk down in the ground and now there was no connection. 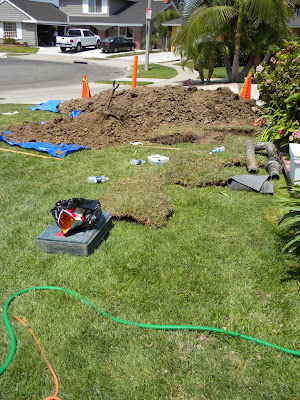 We had no choice but to go ahead with the replacement of the pipes right away.
They did a temporary fix last night. Poor guys were here working in the dark until almost 9:00pm just so we would have use of the pipes for the night.
They came back bright and early this morning and have been here all day.

We are hoping they get it all fixed today. But even when it is fixed the yard will still be a mess.
This is not only a mess to deal with but it's very costly too. This turned out to be several thousands of dollars to get done. YIKES!
Well, on the bright side... our pipes will not give us any trouble for a long time now.
Yesterday we picked out the wood for our floors. They should be starting on those while I'm gone on my trip. At least taking up the old floor here. I don't think they will be laying down the wood until I get back.
I can't wait to get on that plane and leave all this work behind!

Posted by Joanne Kennedy at 1:50 PM

I hate expenses like that, takes all the fun out of things, but on the bright side as you said, you won't have to think about it again for awhile.

Oh, I'm so sorry! The expense and the mess! I'm sure a trip about now sounds good.

I understand this completely, honey. Same thing happened to us once and we were NOT expecting it. But, as you said, at least they are new pipes and are good for many, many years now. We have a portable flush toilet for camping that comes in handy on things like this, chickee......
xoxo,
Connie

I say Yikes too! Don't you just love it when it starts out to be one thing and ends up another? *sigh* Seems to be the norm now for everyone. Good luck with getting the pipe fixed and hope your vacation eases your mind. xxoo

Oh Joanne,, don't you hate spending on an unseen project, I know I do. But you right, it's done and you don't have to worry while your on your trip. Now you can relax!

Our yard looked just like that this past fall--hole, mounds, and then new pipes!

Well, "Curioser and curioser!" I ended up finding your blog while looking for "Alice" artwork through google search,,and your bright flower arraingment from your blog popped up as a graphic????

I didn't even know that blogs were linked to pages like that~ Anyway, fun blog! Your Alice party was great!

I'll come back and visit!
Oh, and if you'd like, I'm having a little giveaway over on my blog if you'd like to stop/errr "Hop" over!
http://Bungalowbling.blogspot.com

Funny way to find you, But Hi!