PART THREE AND THE END OF CALIFORNIA ADVENTURE 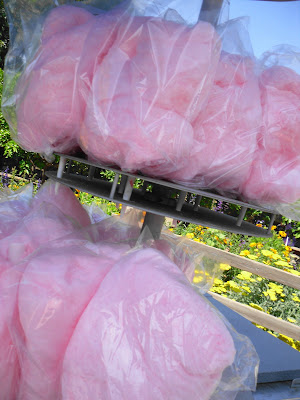 After all the fun we had and the heart pounding Tower of Terror we decided we needed a little break.

So we stopped and had some yummy Cotton Candy. There is something about having Cotton Candy that makes you feel like a kid again.

I just love the look of that spun sugar. It looks like a pretty pink cloud on a stick. It tastes good too. 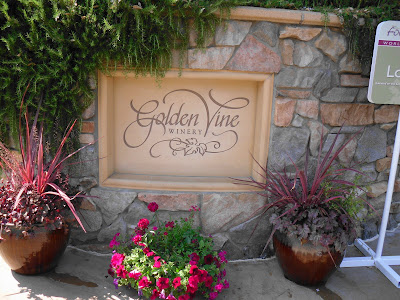 Did you know you can have a wonderful dinner and wine at California Adventure? Well you can.

You can also go through the winery and do wine taste testing. 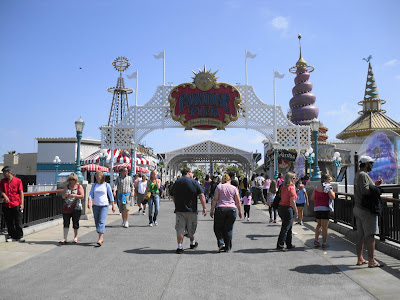 Yet, we passed up the wine and headed for Paradise Pier instead.
This isn't normally an area we go to. It's more geared towards the kids. Since we had Trinity with us we decided to go there. 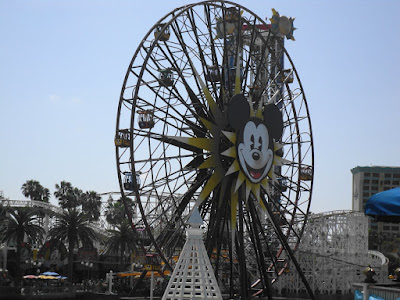 Once there, I remembered, they do have several fun rides for adults too.
Like this one. It may look like a Ferris Wheel but it's not your everyday Ferris Wheel. The little cages you sit in also slide around. Which sort of gives you the feeling like your cage broke free and you are going to fall. 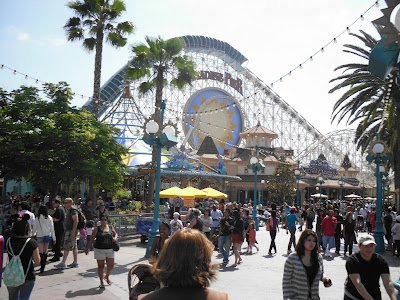 Or the big roller coaster. 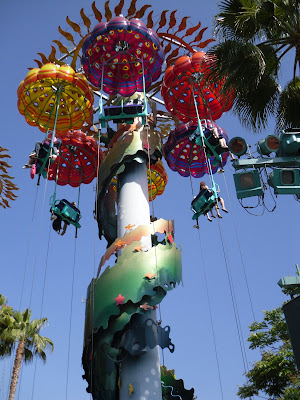 You also have the balloon ride that shoots you up high and then you drop down fast. It gives you the feeling you are going to either shoot off the top of the ride into space or slam down on the ground because the breaks failed. Which of course you don't.
The rides were all very busy with lines that would have been over an hour wait. So we decided to skip them and we headed to the Boardwalk to play games. 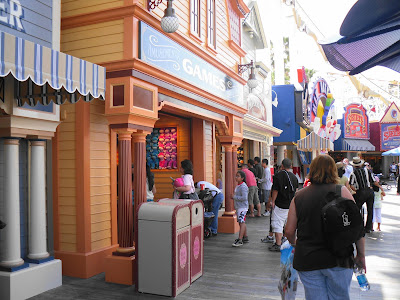 Even though the park was crowded the games were pretty much empty.
They have your typical carnival games here. 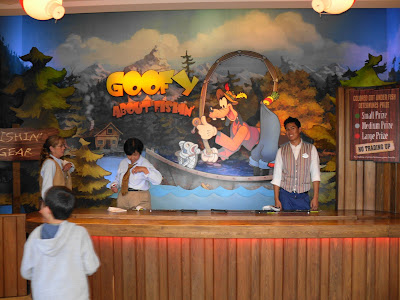 You know the type. Where you can do things like dip your fishing pole into the water, catch a fish and win a prize.
Trinity gave it a shot and ended up winning a small stuffed animal and then one of the large ones on her second try. 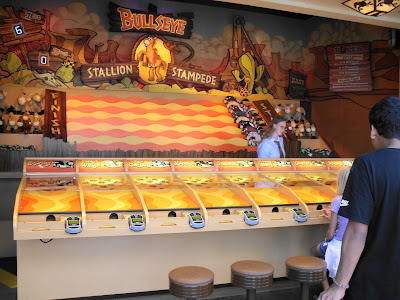 She also played this one where you roll a ball into the holes and depending on which hole you get it the horse moves forward one to three spaces.
When she played, there were six people (the max) and again she WON!
Boy, she was on a roll.
When the other kids, and even some adults, saw her walking around with three stuffed animals, they all decided to start playing.

But it didn't matter if she was playing alone or with a packed row of people, she kept winning. It was unreal. 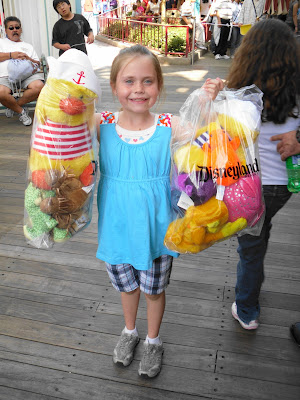 Here she is with two big bags full of her stuffed animals that she won. I think she ended up getting at least 10.

Because it seemed like she wasn't going to lose any time soon, we thought it would be nice to save the rest of the stuffed animals for the other players and we went home.
We were all very tired and very happy. We all agreed that we will be going back several more times in the coming months.
Once school is out we will stay late and watch the fireworks. Disneyland and California Adventure takes on a whole new look at night with all the lights. So we are excited to go back.
There is also one more area of California Adventure that we did not go to. We figured we should save it for another day as we were to tired and was ready to head home.
I hope you enjoyed your time with us as we spent the day at California Adventure.

Posted by Joanne Kennedy at 6:45 PM

Man! You are having a blast! My family is planning a Disney World Trip for 2010. I'm past excited. You've got me more pumped. Great pics and Good Job Trinity:) ~ Margie

Hi JoAnn,
It's been a while since I've visited your blog and boy what great posts you've written. I love Disneyland, but I've never been on Tower of Terror. I'm afraid of heights. Thanks for the tour, now I know what I've been missing! I'm also a fan of Ghost Hunters. I enjoyed reading about your ghost adventures. I find TAPS to be the most reputable of all the paranormal investigators on TV. Well, it looks like you've been having a blast. As always, I so enjoy reading your blog. Take care!

What a lucky girl! I never win at those games. I love CA Adventure. Have you ever gone into the big room with all the movie screens, it's on the way to Tower of Terror? I forget what it's called...but in there they have a place where you can take a quiz and it tells you what character you are. Have you done that? It's a crack up. Sometimes I change my answers and I get funny people, once I was Maleficent! LOL

Hi Joanne
I enjoyed this virtual trip to Paradise Pier so much. I would love to go there it looks such fun. We call cotton candy 'candy floss' over here! Trinity did great on the game. I love that game too but I am not as good as Trinity! Over here we have it as a horse or camel race.
Thanks for your great explanation about the Tower of Terror. It's much better than I imagined and I just wish I was brave enough to try it.
Lindsay

Just look at that sweet face! I'm afraid that I have never been lucky at carnival or amusement park games! Joanne, you would be so BORED if you lived here in New England. I can't believe all the exiting things you get to do and places you get to go! Wow!.... Donna @ An Enchanted Cottage

What a fun place Joanne! It reminds me of Comey Island when it was in its glory. Sadly most rides are gone there now except fo the Cyclone and the Wonder Wheel.

Trinity is a cutie!