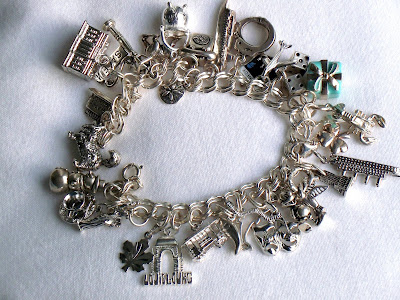 I love charm bracelets. I always have. Even as a little girl I had one. Though, I've long since misplaced it or lost it.

As an adult I never forgot the joy I had every time I would bring it out and look at each charm. I would remember the places I had gone to or the people who gave the charm to me.

So, I got another one. I would love to have a gold one but I knew that could be very costly and often gold charms are hard to find. The silver ones are pretty common and at most places I've been I've been able to find at least one charm to remember the location with. 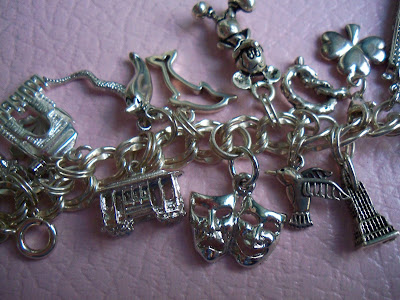 You can tell a lot about a person if you look at their charms. Places they have traveled to, things they love, a sometimes if you are lucky enough you will find little bits of family history.

Here let me show you what I mean.

I love San Francisco and one of my favorite songs is I LEFT MY HEART IN SAN FRANCISCO. It's even my ring tone on my cell phone. So there is a little Cable Car charm.

You can see the happy/sad theater face. This came from my trip to New York. It reminds me of going to see different shows on Broadway. It also speaks about my love for the theater here in CA.

A little humming bird charm reminds me of my mom. When she was alive she always had humming bird feeders and they always made her so happy. After she died, my sisters and I started to notice a lot of humming birds flying by us and they would often hover around us and get very close.

We started to wonder if these little birds were our mom's way of saying hi. So now, when we see them we say "there's mom" or "hi mom".

Next to that one is the Empire State Building. Again, showing my love and reminding me of one of trips to New York. 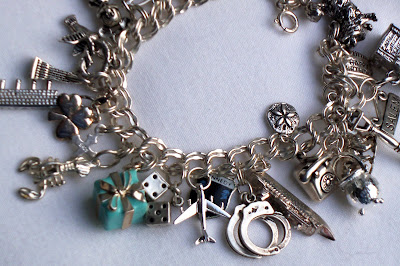 I have so many charms on this bracelet now that I think it's time to get a new one and start filling that one up.

In this photo you can see up on the left side next to the Empire State Building, a ship charm. This is the Titanic. This is from my trip to Halifax which is the city full of Titanic history.

Also, a clover and a cross. They represent that I'm an Irish girl and I'm also a Christian.

My trip to Maine is remembered by the Lobster charm.

The little blue box is from Tiffany in New York. It's my most expensive charm and was $150 or so. Most of the other charms run somewhere around $12-$60 depending on where they were purchased from.

The dice are from Vegas. The plane represents my love of travel. There is also my Family Crest.

No the handcuffs do not represent all my trips to prison. It is from when I went to Alcatraz Prison on a tour.

The other ship is from my first cruise on Holland America. Sadly, most of the ships no longer carry silver charms. I had wanted to purchase one from each ship I went on but, that didn't work out.

The sand dollar is because I love the sea and the phone was from I worked and spent the whole day on the phone. It was given to me by one of my co-workers. 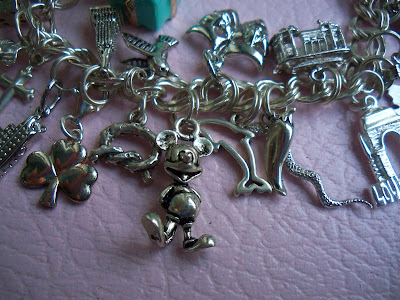 My sister bought me the pretzel and I just adore it. It's because, every time I go to the movies I always purchase a pretzel with cheese sauce and a diet coke.

Of course I had to get a Mickey Mouse. After all, being from So Cal and having year to Disney land, pass almost requires me to have one.

The dolphin is one I got after I did volunteer work counting dolphins in the Ocean as they migrated up North.

Next to that is a Chili Pepper and a snake. These came from my nephew. Both are really true loves of his. However, he told me that not only did he want me to remember him when I looked at them but he said they also were because my favorite type of food is Mexican and because he once had a snake that was the only snake I ever liked.

It was a baby snake when he got it and was a pretty red, grey and black stripe one. When my nephew would clean the cage he would ask me to hold it. As it grew I would still hold it because for some reason I wasn't scared of this snake.

I would always bug my nephew about giving the snake a name. He said his snakes never had names but since I knew this one since it was a baby I thought it needed a name. So he finally said "Fine, it's name is Joanne" and that name stuck. 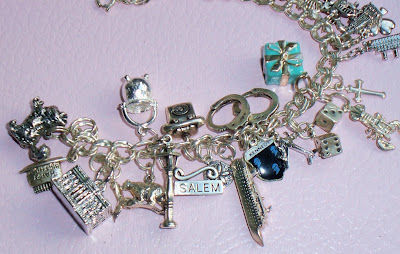 I used to have a Maine Coon cat. I loved that cat more then any other pet I ever had. Sadly, she died a few years ago but I still miss her even today. I often dream of her. So on the left you will see a charm of a Maine Coon cat.

Also, a birthday cake that a friend gave me for my birthday one year. Next to that is one of the mansions from New Port RI. I toured a few when I was on a cruise last year.

It's hard to see but there is a whale's tail charm next. I love to go whale watching and I also saw a whale one one of the cruises I was on when I went to Alaska. Thus, the whale's tail.

On both of my cruises to Alaska I saw a bear in the wild. I was so excited both times. The first one was a big brown bear walking in the forest and searching for a salmon along the river.

The 2nd time was when I was on a train trip and a baby bear was sitting about 5 feet away from the train tracks on a rock. Just sitting there. At first I thought it was fake but as we went by it moved and I knew it was real.

I documented these trips with the bear charm.

Above the bear is a witches kettle. This is because last year I had a Witch's luncheon at Halloween.

Under the Kettle is a sign that says Salem. I got this one when I went to the witch museum and the place where people from the Witch Trials were buried.

I thought it was fitting to put it the two next to each other. 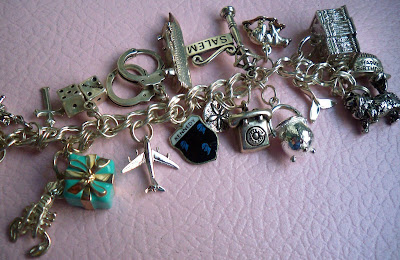 I don't wear my charm bracelet, though I know some people who do. I keep my mine tucked away and every once in awhile I pull it out and fondly remember each getting each one and the memories they each stand for.

Doing this always makes me happy. I think it's a great way to bring a little bit of each trip I take back with me.

I don't do scrap booking. I do charming. 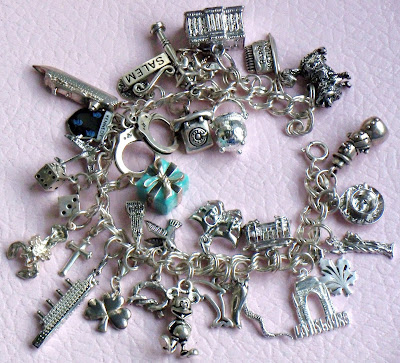 Oh, I almost missed a few. The arch into Louisbourg was purchased when I went on a tour there, the Oak Leaf is from when I was in Canada.

My first trip to New York is one I will never forget. I went up inside the Statute of Liberty and climbed the steps up to her crown. This was before 911 and I remember looking out the little windows and seeing the beautiful sky line.

I knew I would be back again and again. Of course I had to get the Statute of Liberty charm to mark that day.

The little tea cup not only represents my love for all tea items and tea parties but it's from Butchart Garden's in Canada. It even says so on the bottom.

The last charm is a snowman. Everyone who knows me, knows I love snowmen. I collect them and so I had to have a snowman on my charm bracelet.

So, now you know a little bit more about me.

Do you have a charm bracelet? If you do, what story about you does it tell?

Wow, so many memories!

I don't have a charm bracelet but my husband recently bought me a Pandora "treasure box" charm during our IVF cycle. I may add to it! Pandora has tons of charms.

I had a friend when I was little that had a charm bracelet. I always knew she was coming, because you could hear it.

Hey you've changed the look of your blog. Thought I arrived in the wrong place.

I love your charm bracelet! I have one from when I was 12. That summer after 6th grade, my family travelled to Kansas for a family wedding and we drove from California and crossed 8 states. I collected a charm from each one. It is gold but I really am a "silver" person. Maybe I should start a new one!
I also started one for my daughter and I have added a charm for every one of her birthdays. The charms represent the theme of the party we threw for her. I will give it to her when she turns 12.
Thanks so much for sharing! I hope you are having a great summer. We will be heading down to the LB Aquarium in the next few weeks. Maybe we could meet there ;)

I have a charm bracelet. It has mostly James Avery charms. Is his jewelry line as popular in other states as it is in Texas? I'll have to take some photos and share mine now!
Joanne, I'll have to think about the apron. I have never sold one, and I am always short on time!
Blessings,
Lorilee