STEPPING ON THE SCALES 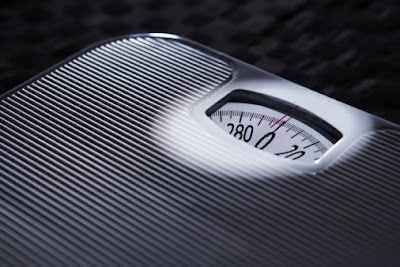 Well, here it is Tues. Weight Watchers day for me. Time to face the dreaded scales.

Today I was pretty confident that I was going to be happy about what I saw. After all, I had been good. Counted my points, did exercise a few times and skipped going out to eat out in an effort to lose weight this week.

No those scales don't lie...or do they?

Normally, when I weigh in I don't see the number on the on scale. It's behind the counter where the lady in charge sees it only. Then with a smile she will tell me how much I lost.

Or, if it's a gain, in a quiet voice she will tell me and asked if the gain was a surprise. Which of course it never is.

But, today, the computers were not working up front and so I went into this cubicle with my leader and stepped on the scale. No pause at all. Just got right on.

This time I could see the numbers. WHAT! They had not moved since last week. How could that be? After all, Weight Watchers weighs you in .0 pounds. So even a few oz. would make the number move.

I tried everything to get that number to drop lower. I moved the right then to the left and even tried standing on one foot! While it got me and my leader to laughing, it didn't get me a lower number.

I don't know why. Really. Sometimes the scales are like that. They just don't give the results you wanted or expected.

I've had weeks where I've eating out of control and I ended up losing weight. Then there are weeks like this one where I did good and I don't lose at all.

I'm not discouraged though. I know if I continue on and do what I did last week then the loss will show up, most likely next week.

Sometimes our bodies are strange and they don't show the weight loss or gain until a week or sometimes even two weeks later.

Often we could be holding on to water weight because of something we ate that was high in sodium or just because we are a woman with that lovely once a month "gift" we get.

I'm not sure really why I didn't lose. I do know, I'm giving up. I will keep on tracking, exercising and following the plan. Because, I KNOW I am going to stick to it this time and get the rest of my weight off.

Aww, I'm sorry the lack of weight loss this week might have discouraged you a little. You are doing such a wonderful job being positive though and NOT giving up!

Weight loss and being determined to make it a lifestyle is SO hard somedays, isn't it? I remember having such a hard time losing all of my pregnancy weight after having my son. It took me well over a year and some days it was so depressing to me. I never compared myself to anyone realistic though, just celebrity moms who had lost it in a month. It was silly of me (not saying your are doing that! Just sharing how bad I felt about myself).

You're so right though about hitting plateaus or your body just not showing the numbers, but still looking/feeling better. You're probably very well building muscle right now though and muscle weighs a lot more than fat!

Well, I just wanted to encourage you a little and tell you how much I admire your determination. I'm sure you are encouraging a lot of women out there with your tenacity. Keep up the good work, girl!!!

it sounds like you are doing all the right things, Joanne. You are probably right about excess water or that lovely time of the month. I feel my weight gain was related to my crazy hormones. Now that they are under control, I am starting to get my weight under control. That and not eating the good stuff!! ;-D

Keep up the good work!

Don't be discouraged and hopefully you will have some weight loss next week. I know it is frustrating when you are trying so hard. Blame it on the hot weather and water retention! Take care and keep up the good work. Love & blessings from NC!

i am sure, that like you said, your loss will show up next week!

my two year old got on the scale the other day and was spouting off random numbers...when i asked her what she was doing, she said, "seeing how big my feet are"!

makes perfect sense to me!

keep up the good work!

First, Joanne, I'm sending your cupcake tea towel tomorrow, so you should receive it shortly. Second, how in the world can you continue with your quest for the best cupcake if you have to weigh in. How many points are a gourmet cupcake worth? Third, muscle weighs more than fat, so all that swimming made the scale show no loss after eating sensibly! Who knows, but don't starve yourself!

I have been doing WW since Feb. and the weight has come off slow but I'm happy with my 20 pound lost...I'm half way to my goal of 40 pounds! Keep it up...it will pay off:)

Well at least you made it to your weigh-in, Joanne. That's more than I can say for this past week! Your loss will show up next week, I'm sure... Donna

Joanne you nailed it when you said it could be a little water weight. Keep up the good work and you'll keep getting good results.