IT WAS A HAUNTING NIGHT AT BLACK STAR CANYON 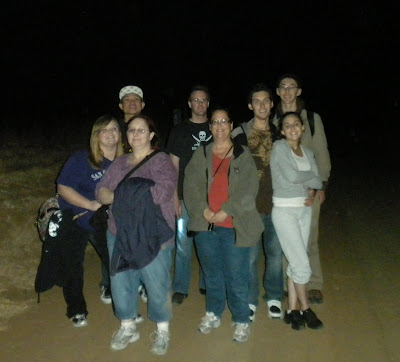 This weekend I went with one of the Paranormal Investigation groups I belong to Black Star Canyon to search for any type of paranormal activity that may be out there.

There are many tales of murder, suicide, KKK meetings, Satanic Cults as well as historic accounts of a large Indian massacre that happened there in the 1800's

I have heard and read about many strange happenings in Black Star and while I have been there during the day before, I have never been there at night.

I was excited to see what, if anything, we would experience. 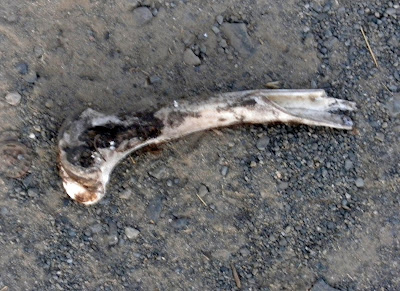 As a few of us were waiting at the main entrance for the rest of the group to show up, Daniel went walking around. A few short minutes later he came back to show us this bone he had found.

It was really kind of creepy because it is a large bone. Not something left behind from someone eating chicken or ribs.

We talked about what it was from and what could have eaten it.

The Beware of Mountain Lion sign was taken a little more serious after seeing this. 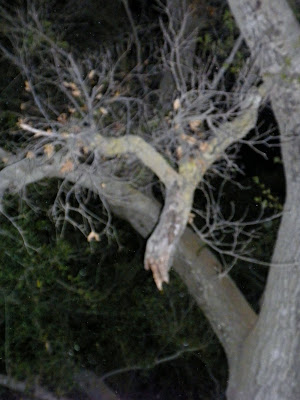 We received a call from the 1/2 of the group we were waiting for. They were going to be at least another hour.

So, the four of us decided to go ahead and start our hike into the canyon. Perhaps we would hook up with the rest of group later.

As we walked a little way into the canyon, it was clear that this hike wasn't going to be the same as during the day.

Things seemed a bit more dangerous at night. It was hard to see anything beyond our flash lights. The trees and flowers, that were so pretty during the day, cast eerie shadows at night.

The quiet sounds of birds chirping were replaced with crickets, frogs and at times, a frighting silence.

Seeing broken tree branches like the one above made us wonder what caused the large branches to break. Would they be falling completely down soon? Would one fall on us? 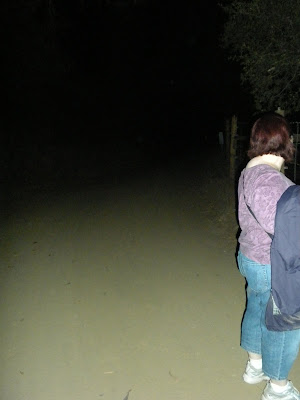 After walking for about 1/2 of an hour I started to feel like I was being watched or followed.

I asked if anyone else felt this way too. The other three all claim they felt that but didn't want to say anything for fear they would sound like they were being paranoid.

We were about 50 minutes into our trek when we came across a bridge. I had recognized this from my trip during the day.

We stopped there to take a peek around and also because a few of us thought we heard something coming from the side of the path.

One girl took a picture and the flash of her camera lit up the area. I noticed in back of her someone was standing about 3 feet. I thought it was Chris because it was the figure of a taller person in black. Actually, the figure looked like it was all black. Like a shadow or something but since Chris has dark hair, was wearing a dark shirt and had jeans that looked dark at night I assumed it was him.

Well, you know what they say when one assumes something. 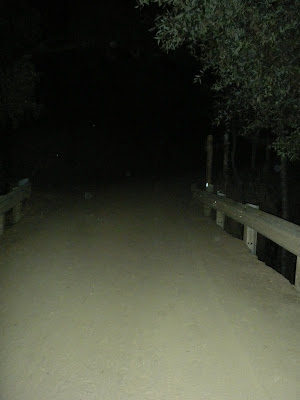 As soon as the flash came, it was gone and so was my vision. It takes a second to get used to the dark again.

During that blip in time, Chris said something. It startled me and I actually got freaked out. Not over what he said but it was because he was not standing to my left where I had just seen him when the flash went off. He was actually over on my right about 6 feet away.

I then quickly looked to see where Daniel was. I knew Daniel was shorter then the figure I had seen but I thought perhaps due to the flash from the camera maybe a shadow was cast and made him appear to be taller.

Only, Daniel was standing over by Chris.

I asked everyone if any of them had moved because I saw someone or something standing behind Bree when she took the picture. Everyone said no, they were still in the same spot.

Chris said he noticed I had whipped my head around and appeared to be startled when he spoke and he knew I was a bit freaked out over something.

I quickly thought about what had just happened and when my mind wrapped around the fact that no one was playing a trick on me, I believed I had seen a true shadow figure.

So, we got out the tape recorder and started to do some EVP work.

EVP work, for those who don't know, is when you capture disembodied voices on a recorder. Often voices you don't hear in person but somehow the recorder is able to. 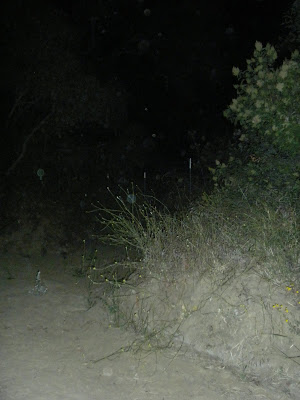 I'm not sure if we actually captured anything because I have not heard back from Bree yet. She is the one who had the recorder and would be the one who went back through her evidence to see if we caught anything.

Anyway, as we were getting ready to move on, I said out loud "We are going to move on and if you want to get our attention again then touch one of us." Then I went on to say "Make the person you touch Daniel."

I said this really not expecting anything to really happen. You see, Daniel had never been on any type of Paranormal Investigation before and was already scared. So, I said this more to lighten up the mood and of course, everyone laughed.

We packed up our stuff and moved on. 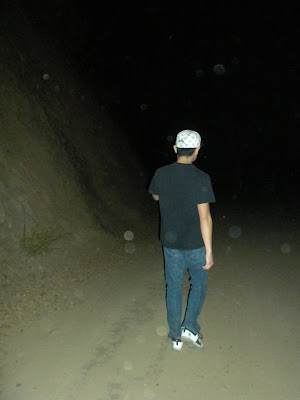 As we were about 5 minutes down the trail it was Chis and I up ahead and then Daniel and then Bree was about 10 feet in back of him.

Daniel bent down for some reason and when he did so he yelled out "Did you touch me!" When he turned around he noticed no one was close enough to him to touch him.

He got really scared and told us how someone or something had touched him on his rear end. Not a shove or push but more of a friendly tap.

He was so scared and excited. After about a minute or so, it dawned on us that I had requested whatever I saw to touch one of us, namely Daniel.

I have to admit that even being the skeptic that I am, I felt like we had just had some kind of paranormal contact. Between feeling like we were being followed, hearing sounds, seeing someone that wasn't there and then Daniel being touch. Well, it was all stuff we couldn't come up with any reasonable explanation as to how that all happened if it was paranormal.

We continued on and a short distance later, a truck came down the trail. There are a few people who own places in the canyon and the stories I have heard are they are not very nice. They do not want people going through there and try to tell hikers and bike riders that it is private property.

The truth is the trail is open to the public and it's the areas on the other sides of the fences that is private property.

We all stepped over as far off the trail as we could so we could let the truck go by. As it did, it slowed down then as it got right by us the driver made his tires spin so the rocks and dust was flying up. It became hard to see and breathe.

Since we all heard the story of a man name Art Tuttle that was a bit... how should I say this, off his rocker, that drove a pick up truck and has been known to pull a gun on hikers, Bree said she didn't feel comfortable and wanted to go back to her car and go home.

The rule is, if we come in together, we go out together. No one is left behind or sent on ahead alone. So, we turned around to leave.

While, Chris, Daniel and I really wanted to go in deeper and stay longer, none of us felt really bad leaving as we all felt we had a great night with lots of activity. 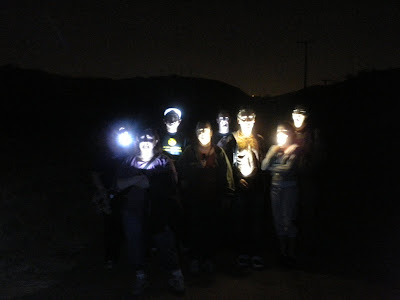 One the way out, we did run into the rest of our group. They asked us to continue on but we explained that Bree really want to go home so we left them to go head.

As we reached the gate to where we parked the cars by, a group of people were just starting out their trek in and they asked if we had anything strange happen to us. We told them and they said "Well if you want to know where a really haunted spot is, go by the bridge. There is always activity there."

Funny, that was right where we had our excitement happen. 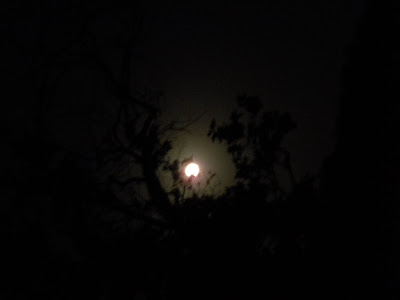 I really had a great time and I'm looking forward to going again. This time, further then where we made it this time.

We have another night planned on the 23rd of July. I wonder what what strange this will happen that night.

Way too scary for me! I wouldn't have lasted 5 minutes.

I wish I could go on these outings with you!