WELL IT JUST WASN'T MEANT TO BE

I've been busy making the two cakes I've told you about.

I had not been feeling good the past few days but, the girl who ordered the cake from me is so nice and I have made many cakes in the past for her so, I agreed to help her out with these cakes.

I should have listened to myself and just said no. Oh well, live and learn.

I can't believe I'm going to share these photos with you but heck, we all mess up now. 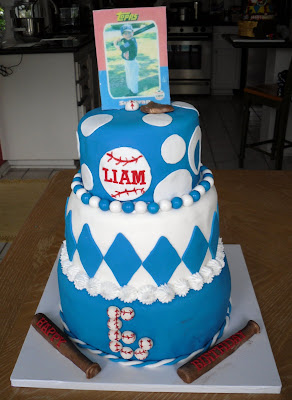 The little boy was having a baseball theme cake and wanted blue and white. So that's what he got.

The top is his photo turned into a baseball card, just like the pros. Then I had it printed onto an icing sheet and used it as the topper along with a little baseball and glove.

The bats say Happy Birthday. Everything on this cake can be eaten.

The mom and little boy were thrilled with this cake. All I notice is how I didn't center the cake! Of course they didn't even notice that. But, I only see the flaws.

Also, the topper was the same color as the cake. For some reason this photo makes it look washed out. It wasn't. 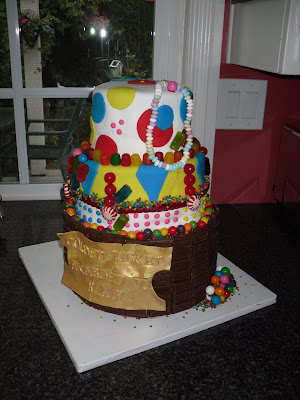 So here is the nightmare cake! From the get go it gave me problems. So many problems. I wanted to just throw it in the trash.

It started with not being able to find the right candy. I had to go to several shops and my sister even went to Disneyland to get the suckers I wanted.

They were going to go on the top and one would say HAPPY and the other one BIRTHDAY with tootsie pops that spelled out the little girls name.

The cake was done and I was finally able to go to bed late last night. I got up early and woke up to the above. The Golden Ticket had cracked and the cake was starting to sink.

I had put dowels in to keep this from happening but it still was sinking and starting to lean.

OK, no problems. I propped it back up, put some edible butterflies on to hid the cracks and got it loaded up in the car.

I brought a repair kit with me in case anything should happen in transport. As I was driving I heard ping, ping, ping. I knew it was the chocolate squares falling off the cake.

No problem I thought. I was prepared with my fix it kit. I had extra candy, icing and was ready for anything. Or so I thought.

I opened up the back of the SUV to take a look and fix anything that needed to be fixed before I delivered the cake. 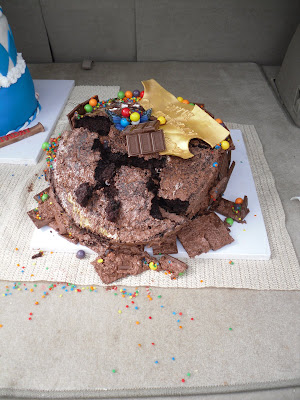 Yes, that was the candy cake. Smashed open and all over the car. 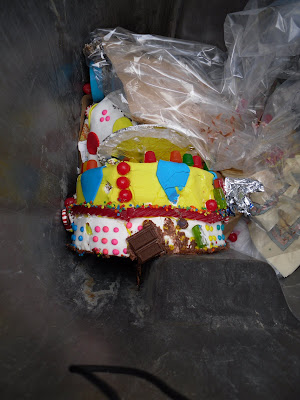 Here is the top, in the trash! I guess it's true about being careful for what you wish for. After all, I did wish I could just throw the cake in the trash.
Now I know this happens to everyone sooner or later. I've seen it on TV shows several times and knew that one day, my turn would come.
I should have known it was going to be this cake. This cake gave me more problems then all the other cakes put together.
So, sadly there was no Willy Wonka cake for the little girl. The party planner did find a bakery where they picked up a simple plain cake.
I didn't get photos of either cake set up at the party all finished up. I was to upset to even think about taking photos there.
I felt bad. Really bad. But life goes on. Oh, and of course I did not charge her for the smashed up cake. So, I lost the money I put out and three days of work.

Posted by Joanne Kennedy at 4:08 PM

I think the baseball cake was perfect! I saw no flaws myself.

I would not have worried about the ticket crinkling the way it did on the other cake. Charlie's ticket was crinkled in the movie. I'm sorry it didn't make it to the party though and you lost out on the time and effort you put into it. It was also very pretty. xxoo

Oh, you poor dear! I feel bad for you. Most of the time a disaster is harder work than anything. When something starts to go wrong, everything goes wrong. I had never thought about a cake disaster before. Hold your chin up & perservere, you are tooo talented to get discouraged...Tomorrow, tomorrow always tomorrow.

I feel for you—truly, but I still had to laugh at how it broke apart, honey! It gave me a good laugh. Sorry, but you are in earthquake country, right? I find humor in everything, sweets. But that gave me a good laugh just listening to you lament on how it turned out.
xoxo,
Connie

They both turned out great. I guess it just wasn't meant to be. What a sick feeling you must of had.

There is always another day.

Awww. It was still really cool! These things happen. They looked so great though!

Oh Joanne, I feel so bad for you..the cakes were both lovely and you worked so hard on them. Like you said, lessons learned and move on. I'd still have you bake a cake for me.. less complicted of course!

It just wasn't meant to be. I'm sorry you worked so hard and it fell apart. I'd still be crying!
Hugs, Susan

Oh Joanne, gorgeous cakes. Beautiful job. I used to decorate cakes when my children were young, but nothing like these.
I am speechless about losing that cake. I can only imagine.

Were our own worse critic sometimes aren't we!

Hi Joanne,
Your cakes were great, sorry about the little mishap in the last one! I sure feel for you, all that hard work and to have it come crashing down while you were delivering it! ouch!
~Ann

Joanne, the cakes were amazing (I don't know a lick about decorating cakes and I'm in awe of the work you did. How sick you must have felt when you opened the car door and saw it. I'm sorry it fell apart on the ride over. And try as I might, I cannot see the flaw with the baseball one - it looked perfectly symmetrical to me - and GOOD! ... Donna @ An Enchanted Cottage

Oh Joanne I can't believe that happened to that pretty cake! What a shame for you, and the little girl, but sometimes things like this are beyond control and happened to the best bakers. I've even heard of wedding cakes collapsing at the last minute. In fact one wedding venue we know of has a fake cake to use in case that happens so the bride and groom can pretend cut the cake and they then serve sliced sheet cake slices. I guess they learned to do that from experience.
The baseball theme cake is wonderful! I'm sure Liam was thrilled.

I hope you are feeling better --I'll send you an e-mail later about the Broadway shows...I'm running errands today!

I LOVEED the baseball cake. Sorry about your Willy Wonka cake. Yes, these things are bound to happen. I guess we just have to embrace them. Hard to do, easier to say. :) You should enter the cake contests on Food Network!

Joanne, that very thing happened to me yesterday on the way to deliver a 3-tiered topsy turvy cake for a baby shower. I just wanted to cry when I opened the back of my van and there was a HUGE mess! I think I DID cry for about an hour, and the fact that the ladies putting the baby shower on were so completely nice made me feel even worse. I ended up taking my emergency kit, running to the store for a bakery cake, and doctoring it to at least be presentable. I know we keep hearing "lesson learned" but it sure was hard to not feel like a complete failure after that. I'm so glad I found your blog and was able to find that, yes, it does really happen to everyone! Love your blog and your cakes!