IT'S BECOMING A FAMILY TRADITION 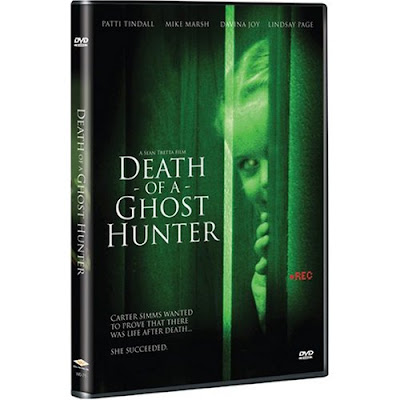 It seems like I may be in the beginning faze of a new Family Tradition.

For the past several months, my sister, Maureen and I drive down to Oceanside to visit with my brother.

We have been going out to lunch then we head over to the local Video Rental store and pick up a scary movie.

All three of us love scary movies. Yes, most of them are silly or down right dumb. But, we still like to watch them and laugh and try to scare each other.

Oh, I almost forgot the most fun part of the day...we have dessert! YUM!

This weekend we went to El Torito and had a nice lunch. Once our tummies were full we went to rent our movie.

We ended up getting Death of a Ghost Hunter. Have you seen this?

It claims to be based on a true story. It says "All events that take place are from the journal of Carter Simms, a paranormal investigator".

She goes to the Masterson House in Queen Creek AZ. The story is that the wife, Mrs. Masterson killed her two children and husband then killed herself.

The movie claims that the Masterson House is one of the top 10 most haunted places in the US.

What transpired is the most terrifying tragic paranormal investigation in the history of moder ghost hunting.

Sounded rather fun and scary. Though while it claims to be a true story I believe it's really a fiction film that is presented as a documentary sort of like The Blair Witch project.

Most of it is shot with a night camera that makes everything have that green cast of light. Eyes appear to glow and it's often hard to make out what is a shadow and what is real.

Let me just say, if this is based on a true story then it's one heck of a scary story. Though I don't believe for a minute it is true.

Still, we all had fun and of course shared several laughs.

If you enjoy a scary movie then I would recommend this one to you. It's a pretty good one though like most of the scary movies out there, there are a few silly moments that just make you roll your eyes and wonder "Why did the director put that into the movie."

So how about it, do you like scary movies? Or are you like my other sister, Patty, that can't stand them and won't watch them at all?

I like scary movies but I am always hesitant about going because I get so scared! LOL But afterward I always have fun. Interesting movie! I might look into it now LOL. Thanks.

I too love scary movies.. can't wait to watch this movie. I love "almost true" stories. Sounds like you really enjoyed it too. I'll let you know what I think.. thanks for the tip!

I'm not a big fan of scary movies as a rule, but I LOVE to read Stephen King's stories and other authors who write in the horror genre.

I love the "Scream" series because it was funny, too and not very scary. I'm more likely to watch Thriller-mystery movies like "Disturbia" and "The Zodiac." I read alot of old Stephen King. I'm starting "The Stand" again. My favorite of his was "It."
Hugs, Susan

My hubby and I are avid fans of Ghost Hunters on Wed. nites. It's our "date" nite. He even tagged along on a ghost hunt with the team last June for a promotion they were having here in Philly. I'm more of a Psychological Thriller girl. Love those!
Kim
ps - great blog!

It depends on how scary, I don't do gross! Your weekly event does sound nice.

OH good lord, Joanne...I am LIVING a scary movie!!
And if you tell me you don't believe it...I'm coming down there and yelling BOO! at you!! LOL

p.s. I've tagged you to play a little game. I was tempted to tell everyone to write their own made up story about their picture...but..thought better of it!
I was probably wise not to change the rules...LOL
Hugs!

Oh, you know me, Joanne - I LOVE scary movies! But NOT slasher or gorey movies... But give me a good old fashioned scary ghost story and I love it! Unfortunately none of my friends like scary movies so it's hard to find someone to go to the movies with for scary ones (unless my Courtney is home from college. She's always up for scary movies!)... Donna @ An Enchanted Cottage

I can't watch scary movies because then I can't sleep! I'm a nerd:(