I CAN HEAR YOU ~ WITH MY PARABOLIC MICROPHONE 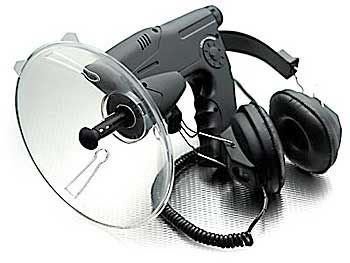 I got a new toy in the mail. It's a parabolic microphone. Have you ever heard of these?

They are built for spying on people. Yet you are warned not to use them for anything illegal.

Have you ever looked at the spy equipment out there for anyone to buy? It's kind of scary what they have. Which in turn is really scary to think about the things out there that we don't even know about.

However, I did not get my Parabolic Microphone to spy on anyone or listen to them talking two houses down.

Nope, I got mine for ghost hunting. OK, stop laughing! I really did.

I saw this being used on one of the many ghost hunting shows out there. They say it can pick up things a normal human ear can't. Like ghosts talking to you. Or EVP as they call it.

EVP means Electronic Voice Phenomena. You hear them talking about EVP's all the time on Ghost Hunters and the other ghost shows.

One June 27th my sister, Maureen and I are going on another ghost hunt so I thought this would be a fun thing to take along.

You can hook it up to a recorder so you listen to everything again later and see what it was you thought you heard.

I don't know if this will really work or not but it sure would be fun if it did.

I tried it out at home and let me tell you...you do hear things that you normally wouldn't be able to. I was able to hear my sister, on the other side of the house, breathing. No, she is not one of those people who breathe loud or with her mouth open either. She was just being normal and even when I stood next to her I couldn't hear her. But, when I had the parabolic microphone on I could hear her from the other room.

So, who knows? Maybe I'll catch a ghost one day talking to me. If not, heck I can always listen to my neighbors two doors down. LOL

Posted by Joanne Kennedy at 3:03 PM

You are sooooo funny, sweetpea! I don't think I'd WANT to hear what my neighbors were saying actually, chickee. Might disillusion me.
xoxo,
Connie

OK, you are cracking me up!!

It sounds like fun to me. I am going to visit my family soon and hopefully we can go out ghosthunting on at least one night while we're there. We can go to the cemeteries there at night and it's OK. Can't do it here, it's against the law. (probably due to vandalism.) I'd like to get one of those mics. Too scary. Let us know how you make out with it!

I'm such a Gladys Kravitz it would be so tempting to listen to the passer byes. We live on a boulevard and I've always wondered where everyone is going, especially in the wee hours. What they were chatting about would be even more interesting. Not as interesting as listening to ghosts. I'd like one of those meters on Ghost Hunters that ghost use to respond to questions being asked. The meter will flicker a row of lights when there's a ghostly communication.

I enjoy spooky movies too. Not the gory slice and dice, but the ghostly hunting kind. That's why I prefer the original classics like 13 ghosts and Vinnie Price. The 13 ghost remake was sooo creepy beyond scary. I barely made it through the television edited version.

What a hoot. Hey maybe listen to the old man down the street. Maybe he has some weird stuff going on. LOL

Happy Ghost hunting!! That is funny. Love & blessings from NC!

WHAT a toy that is! Have fun, LOL! I wonder what I would hear if I had one of those! I wonder if I would WANT to hear certain things! LOL!

This should be sooo much fun! I can't wait to hear about your next Ghostly adventure. In the meantime, try not to spy on the neighbors too much, LOL!!!

I can't wait to hear about your ghost adventure! I've seen local paranormal meetups online, but I'm too chicken to go. I'll just keep watching Ghost Hunters on TV instead!

Have fun with the microphone. I'm afraid the only thing I would hear in the 'big harsh' is the thumping music even louder than I hear it now. :) xxoo

Where are you going to do your ghost hunting? You are so cool!
Hugs, Susan

What if you really do here a ghost?. I would be scared. But it does sound like fun.
Let us know what happens.
Enjoy your day,
Elizabeth

Get your hinny in the car and bring that thing up here. I SAW it today! Bring your camera!