I'VE BEEN GONE TO LONG!

I know, I have not been around the past few days. I've been pretty busy and just couldn't find the time to blog. So it's time to play catch up.

This past Sunday my two sisters, Maureen and Pat, my brother in law, Jeff, my nephew, John and my great niece, Trinity, and I all went to breakfast at this hotel that is not far from where I live. We went to celebrate my birthday.

It was so nice. We sat outside, had wonderful food and a nice view of the lake. The best part was they allowed you bring your dogs! It was the first time I've been able to bring them (legally) to a restaurant with me. I say legally because when my dog was little I used to put him in my purse and take him everywhere. To restaurants, movies and stores. He was so small that no one noticed him. But now he is to big. 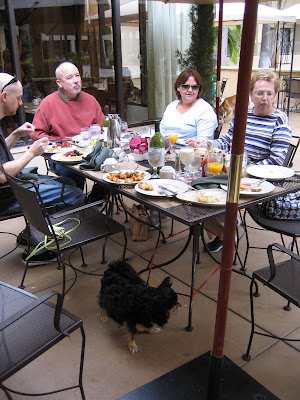 That's him under the table. His name is Elton and he is a long hair chihuahua. I know, I know, he needs to lose weight. 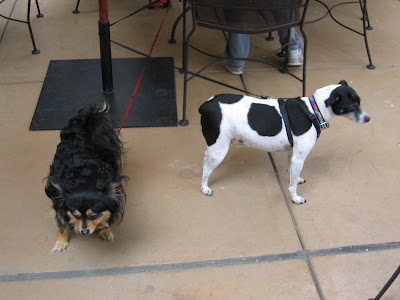 Both Elton and my sister Pat's dog, Zeke, were so good. We were a bit worried they would bark at the other dogs but they couldn't have been better. They loved going. 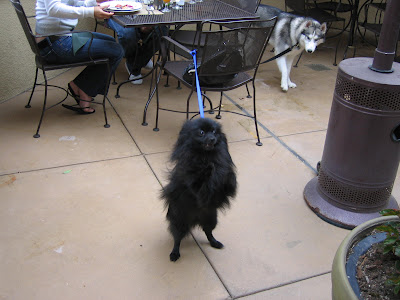 This little guy was sitting next to us and wanted his picture taken so badly. I couldn't let him down. He was so cute. 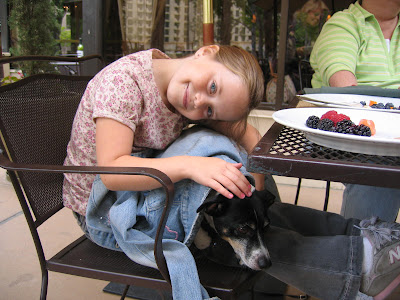 Zeke is a short haired dog and gets cold a lot so Trinity put her jacket on him and kept him warm. 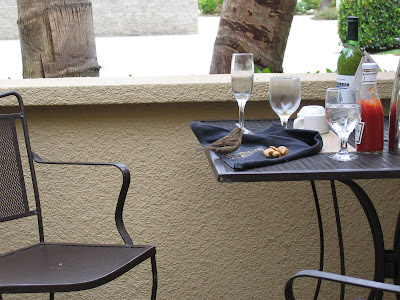 Even birds came by to join us. Wasn't it nice of the people who left him a little breakfast.

After we ate, we walked around the lake and saw ducks. This is mommy and daddy duck. They had two little ones but the picture I took of them didn't come out. 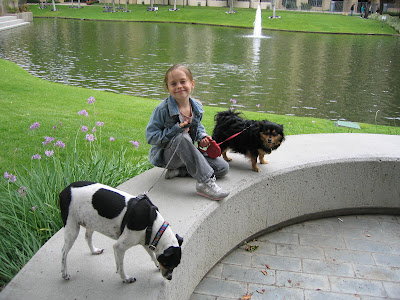 We all decided it was one of the best breakfasts we ever had and we will be going back again. The price was very good and they even donate a part of the money to a dog rescue.

On Memorial Day I went to a movie with my sister. I'm so blessed to have my family all living close to me so I can see them a lot. We are all very close and get along great...........most of the time. LOL

Tues I went and spent the day with my brother, Gene, at the hospital. It was great day. He took his first steps! The best part of that was it showed him he will walk again one day. It gave him a boost he really needed. Sometimes it's hard to stay upbeat when the progress is so slow.

He also was moving his arm a little bit better.

While I was there he got a few cards. He wanted me to tell everyone thank you so much. They mean a lot to him. He loves to see where the cards come from and he shocked so many people he has never met cares so much and really are praying he gets better. Cards are coming even from other countries!

Before his stroke, we had plans to travel soon. On May 30th he was set to retire and was going to free to travel with me. Well of course, those plans got pushed back, But Tues he said when he gets better he still wants to travel. He wants us to go around and met all the wonderful people who sent the cards so he could thank them in person. Wouldn't that be fun!

Today I spent a few hours in the garden planting flowers. It was nice to play in the dirt for awhile. Oh, I should have taken photos. What is the matter with me! Well maybe I'll do that tomorrow as I'll be around home all day again working on projects.

So until then, be safe and take care of yourself.

Hugs to you all,

Joanne, first I want to say congrats to your brother, Gene, for taking his first steps!! I think that is so exciting....especially because I know what it's like to not be able to walk. After my accident, I could barely walk at all. That was 7 1/2 years ago, and last summer I was so excited just to be able to walk to the Starbuck's near my apartment!! It's probably less than a quarter mile, but for me it was a huge accomplishment. So, I'm thrilled for your brother!!!

Love your pictures! Your furbaby is adorable!

Hi~
I was cruising around and found your blog via Screaming Meme via... someone else(?).. But your blog really caught my eye because I too turned 50 this month! I enjoyed reading some of your posts and would love to add your blog to "my blogs that I read". Would that be okay with you? You can find me at grandmarachal.blogspot.com

Hi Joanne,
What a nice few days you spent with your family!
And what good news you have about your brother. I am happy to read he is talking about travelling again.
Take care,

Joanne-what great pics & happy birthday to you! what great news about your brother. what an accomplishment for him! elton is adorable & the whole day looked like lots of fun for everyone including the birthday girl. thanks for visiting yesterday! :) chris

Looks like a lovely day :) Great news to hear your brother is walking, I know what you are going through, hang in there.

Hi Joanne!
I'm so excited about your brother's first steps!! That's the best birthday gift you could have gotten!
He WILL travel with you and I hope your route includes Ohio.
Great restaurant, I've never heard of dog friendly one. What a nice thing. Glad you had such a good time with your family!
Hugs, Sherry

Hi Joanne,
First of all HAPPY BIRTHDAY!!! 50 the best part of life!!!!!
Thank you for your comment. I just wanted to let you know I have a Secret Garden. I haven't posted any pictures yet but I will soon. It was one project that my husband and I had so much fun doing. Make sure you take before and after pictures. Can not wait to see your done project.
Hugs,
Mo :-)

Looks like a fun day! I'm glad your brother is starting to walk! That is great! I still need to send a card...I have to remember that!

So wonderful to see you are surrounded by your family. It does make a difference. I would love to come to a restaurant the allows them. There is only one or town local towns around me that allow that. My girls are barkers and I know they would annoy.
It good news for Gene. Does he get outside of the hospital, so he can see nature and all ?. And he's looking to the future.

Love your pictures! Your furbaby is adorable!