I received so many emails asking why I never finished sharing my trip with you.

To be honest I thought perhaps you could be finding it a bit dull. But, since so many of you asked for more I thought I would return to my trip and pick up where I left off. 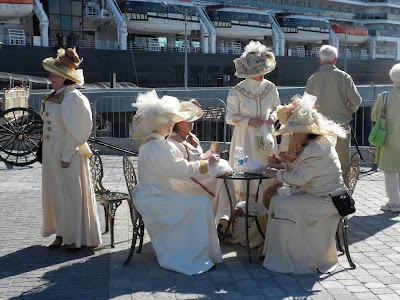 Saguenay was our next stop. Getting off the ship here had to be the best greeting I've ever seen a town give a cruise ship.

No one had any idea why we were given such a wonderful welcome and we thought they must do this to all ships that dock here.

We later found out differently. This was a one time deal. We were very lucky to have been here on this day. 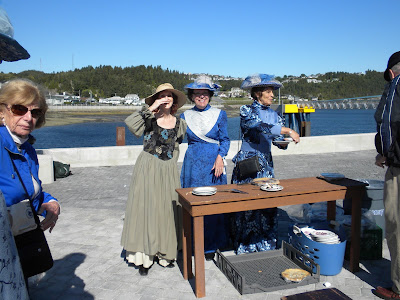 Several people showed up to meet us and were in costume from the 1800's.

These wonderful ladies were handing out free blueberry pie. I was good and didn't take any. I hear it was wonderful though and I should have. 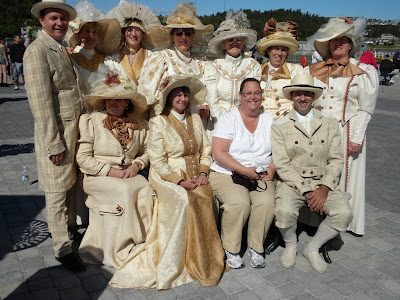 This group offered to pose and sit with us. So of course I took them up on their offer.

There were two ladies who took their photo just before I sat down so there was going to be an empty seat next to me. However, this lovely gentlemen came running over and yelling for them to "Wait! Don't take the picture yet!"
We all stopped and watched him run up. He quickly sat down next to me and said how he just "had to sit next to such a beautiful lady". Well of course we all oohed and awed before we settled down and smiled for the picture. 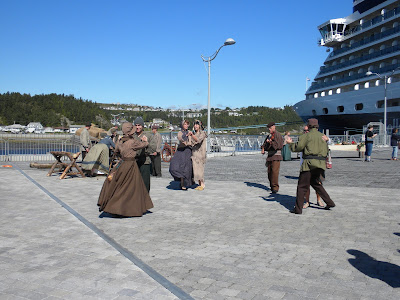 Some people were playing music from back in the day and dancing. They would pull up anyone who standing and watching. So I quickly clicked my photo and walked away far enough to not be pulled in. 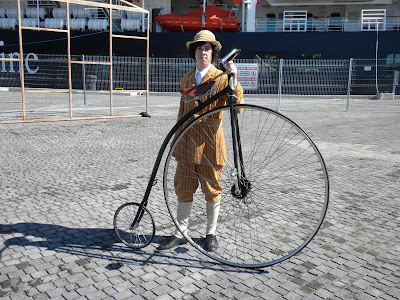 This guy was actually riding this bike! He would run and push the bike then hop up to the seat. 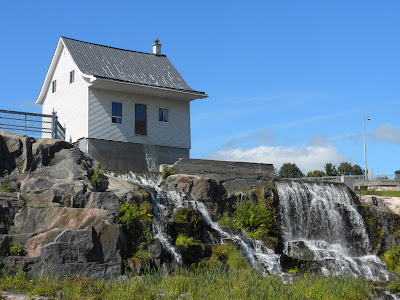 After spending some time at the dock I went to meet up with my tour bus and we drove around the town.
To be honest there wasn't much to see here. A few highlights were shown such as this little White House. It with stood a major flood and destroyed most of the buildings around it. 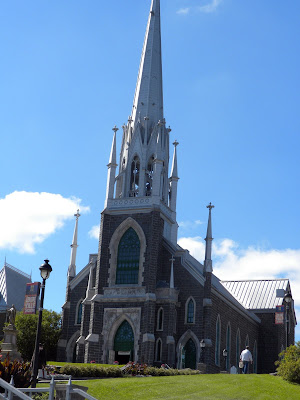 Across the street was this beautiful church. Our bus driver only gave us 10 minutes to go click photos at the Little White House but I ran over to see this church as it was much more to my liking then the Little White House.
Once again, I break the rules by going to the church and as I looked behind me I noticed a small group of people following me.
Oh no! Not only did I break the rules and hold up the tour but I got several others to do the same.
Thankfully I didn't get in trouble. 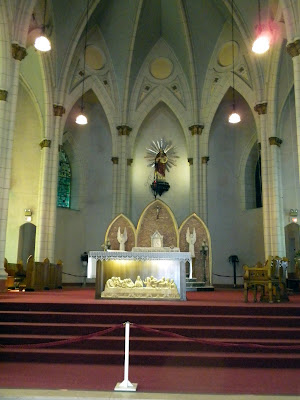 They have so many beautiful churches in New England and up into Canada. I wanted to go in all of them, even though I only got to go into a handful. 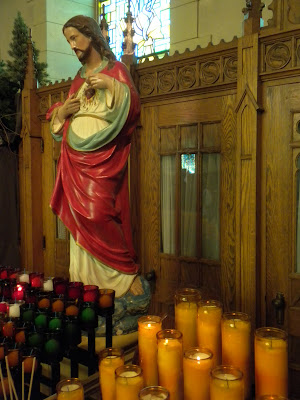 I don't even remember what kind of church this was but I slipped some money in the holder and lite candles in memory of my mom, dad and brother who have all passed away. I did this at all the churches I stopped at. 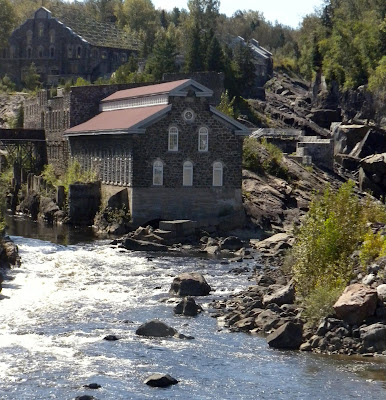 We stopped at this old paper mill. It is now a museum but we were not allowed to go inside.
That was pretty much how the whole day went. We would pull up to a place and be given 5 minutes to get out and take a photo but NO time to go inside or explore.
Finally the group got tired of doing this and everyone stopped even getting off the bus. Someone asked if we could take some time to go get something to eat rather then make more stops.

The rest of the group said that sound like a good idea and our tour driver finally said that we were going to stop at a nice little resturant and we could run in to get some snacks.
Well we all started to laugh when we saw our "nice little resturant" was actually a gas station.
Most people got off, got some chips or a drink and got back on the bus. Our tour guide then asked if we wanted to stop at..... are you ready for this? Wal-Mart!
We thought he was joking. But, he wasn't. We didn't want to go to Wal-Mart and asked if we could just be taken back to the ship. So he said yes.
Only we didn't go back. We drove around the town for about an hour longer. Nothing much to see in the whole town that we had not already seen. I mean really! If Wal-Mart is the big stop then that's saying something.
We finally made it back to the ship.
I noticed a large fenced off area with bleachers set up and lots of people were sitting there looking at the ship. Music was playing and people were excited as they watched us get on the ship.
It turned out that we were the first ship to ever dock there. They had just finished building the pier and our ship was the first to use it. So it was a big deal.

Our ship was also the largest ship ever to stop in this town. So that is why we had the big greeting and send off. 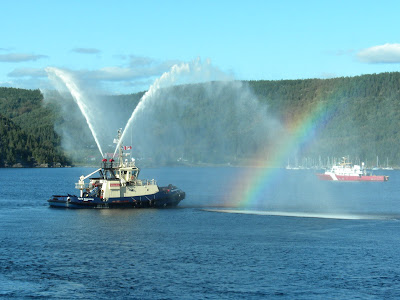 Even the boats were sending us off with a big fanfare of horns blowing and water shooting up making rainbows.
So, even though this town didn't have much to show us they sure knew how to make us feel welcomed and special as we left.
I've never seen anything like it and I doubt if I will again. I'm very happy we got to stop in this wonderful little quiet town.
I'll take us to Quebec in my next post. I'm happy to hear you guys enjoying the trip as much as I did. If you ever get a chance to go on this cruise you really should go. It is beautiful and full of history.

Posted by Joanne Kennedy at 9:10 PM

Joanne, it looks like you had such a fantastic time - and most days were beautiful and sunny (except Salem, right?)... Thanks so much for your prayers for dad... It means so much. I'm looking forward to seeing more of your cruise!... Donna

What a wonderful trip that must have been. Such lovely pictures of all those ladies dressed in old fashioned clothes. Beautiful.
Have a nice day

I didn't visit that town on the cruise I went on...was it in Newfoundland? We stopped at Corner Brook...it was very much the same :-)

I hope I can see you when you come to NYC in the spring, Joanne!