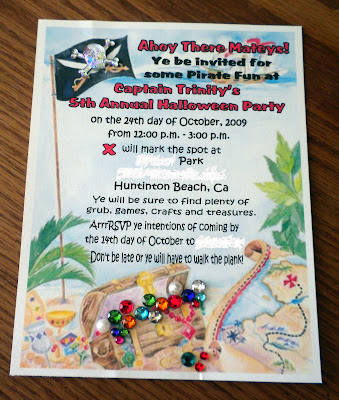 The invites are finished and the jewels are spilling out of the treasure chest.

They will be delivered tomorrow and then there is NO TURNING BACK!

The party will be on. Dozens of kids will be running around dressed as Pirates and hunting for treasures.

This has really been one fun party to plan out and I can not wait to see it all come together.

It will be the first time we have held the party at a park rather then inside. Each year the party got bigger and bigger and we just ran out of room.

The bad thing is we have to haul all the stuff to the park and set it up there. It shouldn't be to bad though because we reserved a big spot that isn't to far from the parking lot.

It will be nice to have more room to spread out. Plus, even if it should rain we can carry on because it's all covered and so we won't get rained out.

Though we have still been having summer time weather so I doubt if it will rain.

I think only one year we had a few sprinkles on our Halloween party.

I got a great compliment that I thought was super! My sister, Maureen (who is Trinity's grandma) works at the school where Trinity goes. She told me every day kids are coming up to her asking when Trinity's party is going to be and asking if they can attend.

I thought that was such an honor because the word is out that Trinity has the best parties and even kids who have never been to one of her parties wants to go to one.

What could be better then that! That made me happier then even if the parents would have said it. My goal is to throw parties that Trinity will always remember and all her guest will have fun and remember too. Looks like I met that goal.

Posted by Joanne Kennedy at 2:12 PM

Can I just say {"I LOVE YOU!!") I LOVE THIS STUFF!! I am the party queen LOL I help and do all kinds of dec. for my kids and family and friends birthday's I am always searching for new idea's your parties top mine!! I love off the wall theme's that I have to go figure out how to decorate them!! ahhhh anyways I am following your blog now.. I would love to share some of my pictures of parties I have done and are going to do!! not sure how to do that but anyways great work I LOVE IT!