I've been staying busy in the kitchen. I don't know what came over me but I got into a mood to try new recipes. 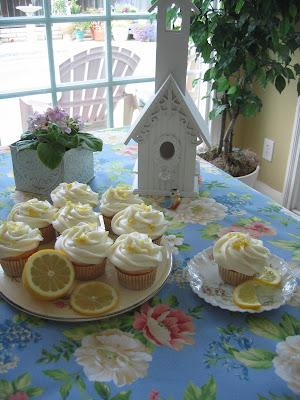 First I made these yummy Lemon cupcakes with Lemon Cream cheese icing. These are so good! Perfect for a nice summer day. 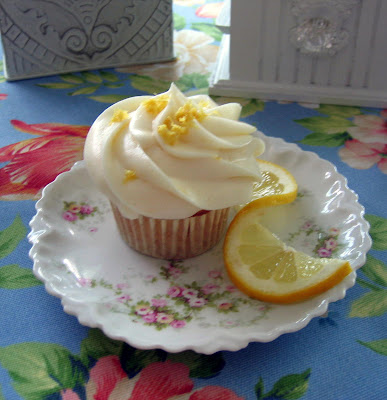 I got the recipe from Cindy at Romantic Homes. She made these a while ago and I've been waiting for the perfect time to try them. This was the day!

I have to admit these were some great tasting cupcakes. I made them with lemons that my brother, Gene, grew. Nothing like using home grown items to bake with.

*** I don't know what I was thinking! I should have known you would want this recipe too. I added it in the comment section of this post.

UPDATE: Seems like a lot of you want to know what tip I used. It was a 2D. Any large star tip would work though. 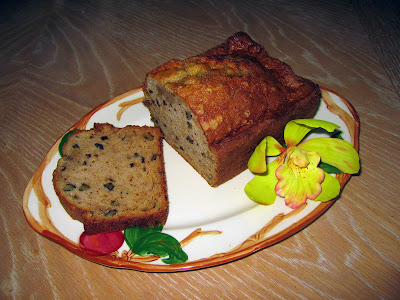 Speaking of home grown, my friend gave me some zucchini that he grew in his garden. So I made this zucchini bread. I just Googled "Best Zucchini Bread" and used that recipe. I wasn't sure how it would turn out but it was very good. Nice and moist. I did add extra cinnamon.

I like my baked goods to have lots of flavor so I always add a little extra flavoring to most recipes.

Oh, and I even made the orchid out of sugar paste. 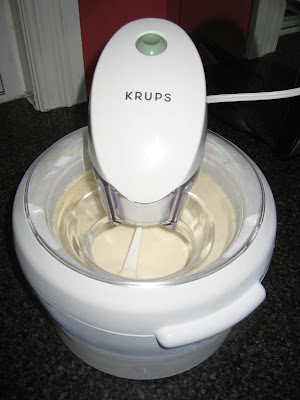 I had some ripe bananas so I knew right away what I wanted to do with them. I love Ben and Jerry's Chunky Monkey ice cream. So I figured I could make my own.

Banana ice cream with walnuts and chunks of chocolate. YUMMY! 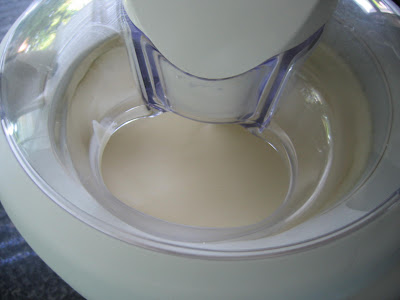 Again, I turned to Cindy at Romantic Homes. She did a post about making homemade Banana Ice Cream. So, I emailed her for the recipe and whipped it up. I just added the nuts and chocolate after it was about ready to come out of the ice cream maker.

It's a no cook recipe. Good for me because that just makes it short and sweet.

I wasn't sure how this would turn out though because it didn't seem to set up like the other ice cream we have made. It was more runny. But I put it in the freezer and hoped for the best. 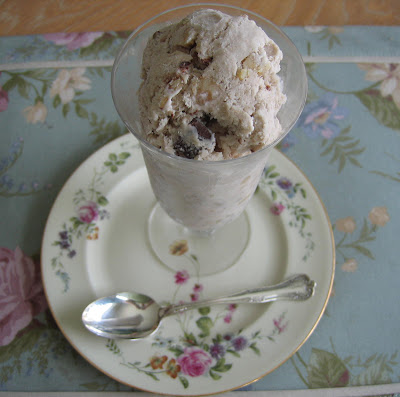 Look! It turned out great. It's nice and creamy and full of flavor.

So there you have it! I say Martha Stewart has NOTHING on me. LOL

Hi Joanne. YUMMY....I really enjoy lemon treats and your cupcakes look so good. Guess I need to get that recipe. I really enjoy blogging and come visit me sometime. Thanks for the great pics. That's another thing I'm working on. Happy weekend. Warmly, Deb

Yes, we need the recipe too...and how did you get the frosting so pretty?

Now I need a lemon cupcake. It will never leave my head!!! Great pics! And Martha: BEWARE!

Ohhhhhhhhhhh....yummmmm!!! Those sure look delicious!!! MARTHA, can I have one of each, PLEASE???

Wow, they look yummy. I am calling you Martha!

OK, what was I thinking? I can see everyone wants the lemon cupcake recipe so here it is.

Now, I added 2 Tbs of lemon juice and the rind of one lemon to the batter.

I also added an extra Tbs of lemon and the rind of a lemon as well as 2 tsp of vanilla to the icing.

Let me know if you make this.

ok, martha...errrr....joanne, when do you want us over for dinner? hehe.

Martha, I mean Joanne...can I come visit and eat all those yummy things you made????....Please, please, please??? Well, you probably live too far away so I'll just have to tell you you did a FANTASTIC job!! Beautiful lemon cupcakes and zucchini bread *yum*. The ice cream just tops everything off!! Sure do wish I was your neighbor. The recipe does look easy so I will be trying it sometime, of course, they won't look as pretty as yours. Thanks for sharing. :)

JOANNE!!!!! What wonderful treats! If I lived close by I'd be knocking on your door for one of those cupcakes and some ice cream -- heck I'd even have a slice of the zucchini bread. :-)

Everything you make looks so professional and I can't belive that orchid was made with sugar paste...it looks so real.

The "Patsy" in that sorty book on my blog was a little boy --I guess a Patrick. It was a very thouching story,

Have a good weekend!

Your pictures look like something out of a magazine! Can you tell us more about the ice cream maker?
Thanks for posting the recipe!

Well, now I am even hungrier than I was before. I'll be over for dessert...let me call the airlines ASAP.

They look great. I wish I liked to cook. I just don't have any good recipes (except enchiladas) that we like. We can only eat enchiladas some many times in one month!!! I think I will try your recipe, when I get a chance that is. I talked to Maureen about our girls day out in Hollywood. My husband is going on vacation the 18 through the rest of the week. So sometime that week would be good. Talk to you soon!!

Wow!! All of it looks so good! Thanks for the recipe!! Yum!
Love the plates you used too!

Okay, put the mixer down, raise your hands sloooowly, back out of the kitchen and head for the nearest "cooks anonymous rehabilitation" facility. You'll be just fine there - no cooking, no fats, no calories and no drooling, my lovely cottage chick!!! Oooooooh, that was a close call for sure. You almost OD on sugar and lemon!!!!! Be careful, chickee!!! Had me scared there for a minute.
Smoochies ;-)
Connie

Yummmmmmmmmmm..........Those cupcakes look fabulous. You are a creative baker!!!

Joanne,
Thanks for visiting me :) Yes, it's very funny NOW about the turtle at Kailee's shoulder, at the moment it was horrible for her. Thanks so much for the recipe. If it's not too hot, I'm going to make them on Tuesday for the gals that are coming over on Wednesday:) I'll let you know. Happy weekend. Warmly, Deb

I think we need to call Martha - "Joanne"!! Those cupcakes....WOW - they're making our mouth water!!
Have a great weekend!!

Oh Joanne, those cupcakes look yummy and they are so pretty!! Presentation is everything.

I think those cupcakes far surpass "Martha Stewart". Perhaps you could start your own line....

I love the beautiful plates and dishes that you display your lovely creations on. I covet those rose plates, they are so dainty. Maybe we will find some pretties on our "girls day" of shoppin.....

You have such a talent. I look at these and say to myself how does she do it. Then I remember you make cakes and such for a living. I wish I had the talent for this. Anything lemon is alright with me. I love lemon bread etc.....

I love lemon. I am definitely going to look up that lemon cupcake recipe!! Yum-O!!!

Oh my gosh, your cupcakes are gorgeous! And the orchid looks so real!!! You put Martha and me to shame! Next time I make those lemon cupcakes I'm going to add the extras too! What tip did you use on the cupcakes?

I noticed you have BlogHer ads now! Yay!

I dont' think I've been by your blog before. Very pretty & those recipes sound great. I love homemade ice cream.

Thanks for the recipe for the cupcakes. I can't wait to make them. As a few others asked...could you please tell me what you use to make the icing so pretty? Do you use some kind of tips? If so can you let us know the secret of what kind etc? Thanks! I enjoy your blog!

you are really a good cook.It all looks so yummy.

It all looks devine, and I have to tell you that I LOVE that plate that you have the cupcake on! It's gorgeous!!

Not only do the recipes seem yummy, but your presentation is gorgeous!