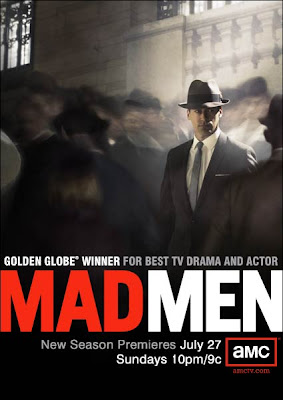 One of my favorite shows on TV these days is MAD MEN.

For those of you who have not watched it, it's about a group that works at an Advertising Agency in New York on Madison Ave in the 1960's.

It's a great show to watch as the stories are not only great but the whole set is fun to look at.

Last year was the first season and the first show I watched I wasn't sure if I was going to like it. But, after the 2nd show I was hooked.

They show what normal life was back in the 60's and all the things everyone took for granted back then. Like smoking. Everyone, smoked...all the time. Even at the Dr. office, movie theater, stores, hair dressers and restaurants.

There was one scene, where two children were playing while the mothers sat at the kitchen table, smoking and complaining about life. The children came out and the little girl had a plastic bag from the cleaners over her head. Now we all know how dangerous that is right? Well, back in the 60's they didn't. So the mother yells at the little girl, not for having the bag over her head but because "The clothes she just brought home from the cleaners better not be wrinkled!".

I'm so excited the 2nd season is finally going to be back on. Starting July 27th. If you have not checked it out mark your calender so you can do so.

I know not everyone likes this show. My brother didn't care for it at all. But I have to admit, most of the people I've talked to about this show loves it. It also won tons of Awards.

As for me, I will be glued to my TV on July 27th being transformed back in time as I watch MAD MEN.

I've only seen the show a couple of times. I'll try to remember to see it when it comes back on.

I just read your comment at the back porch and thought you are right about the roses looking almost fake. When I first looked at them on the monitor, I thought some of them looked like cake roses or gum paste. In fact I named one of them sugar rose. My daughter had gum paste autumn leaves on and around her wedding cake last November. The roses remind me of those leaves.

Have a great weekend.
Pat

Hi Joanne, I've never watched the show but will give a watch. With summer TV so boring, it will be something worthwhile. It sounds really cute. Have a great day.

I have never heard of this one. I'll have to watch it.

I adore Mad Men, too, and the dry cleaning bag scene is one of my favorites! I already have it set for my DVR!
Maybe you could post the show for Vintage Thingies Thursday!

That is a show I have not seen or heard of. It's interesting the shows we get hooked on. For years we didn't watch tv at all and now we watch House and Ugly Betty.
We don't watch it every week but if we are home and tired...on goes the tv.
I'm looking forward to the flower lesson!!!