DO YOU WANT TO DREAM WITH ME? GIVEAWAY!!!

WINNER IS: Connie at Living Beautifully! I assigned everyone who left a message a number and then I let the computer pick the random number.

I went to Joann's to get some plate holders and some material to send to one of the other bloggers.
As I was checking out I noticed that over at the register they had some pretty pink letters. 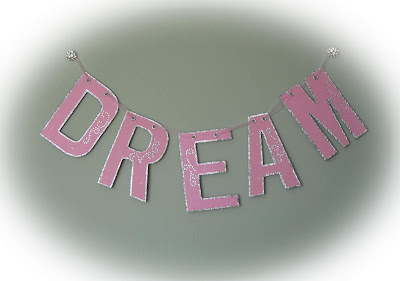 So I got the letters D R E A M and went home, put some ribbon through them and made this sign. When I hung it up I thought I should put something at the end to add a little more sparkle. So I put some vintage rhinestone buttons. I think it came out pretty cute. How about you? 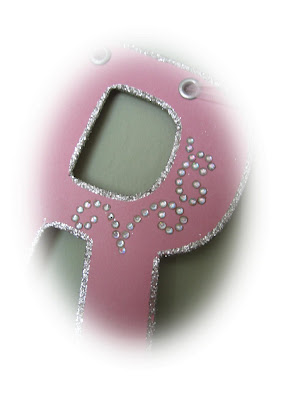 Each of the letters have silver glitter around the edges and then clear rhinestones to make them sparkle a bit. 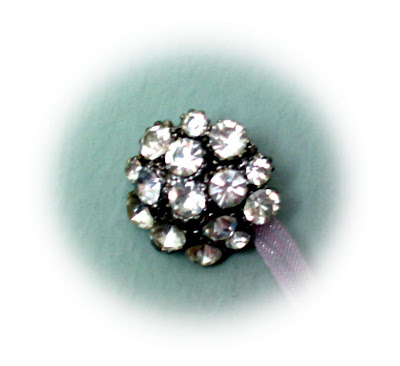 These are the buttons I used. I was just going to put some white vintage buttons I had but thought these looked better.

So do you like the sign? Do you want one of your own? I'm giving one away. Want to know how to win?

Just leave me a comment telling me what your dream is. I'll draw a name out from the list of people who do. Then I will send the winner your own letters and ribbon. The only thing you will need to do is put them together (takes minutes) and add your own buttons to the end of the ribbon. You don't really even need to add the buttons if you don't want to.

I'm going to pick a name tomorrow evening. I know, I know, that isn't much time for a giveaway. But I wanted to reward those of you who stop by all the time by doing a quick giveaway. That way, you have a better chance of winning as not as many people will enter.

If you missed out, or didn't win this time, keep coming back. I've decided to toss in a few of these quick smaller giveaways from time to time. But, you won't know about them if you don't stop by often.

Also, for those of you who have not entered my CHRISTMAS IN JULY giveaway, there is still time to do so. You have until the end of July to do that.

Good luck to you.

Giveaway is now closed! The winner is: CONNIE from LIVING BEAUTIFULLY. Connie, I emailed you asking for your address. As soon as I get it I will slip your "Dream" in the mail to you. Congrats!

Posted by Joanne Kennedy at 5:05 PM

my dream is to watch my children achieve adulthood and become successful in whatever they choose to do, and give me plenty of grandbabies to cherish!

Hi Joanne!
Of course I want to join your giveaway! That is adorable and what a great idea to do a quickie giveaway, you are sooo smart girl!!
My dream is to visit all my favorite blog friends (like you of course and Gene too) to meet them and get to know them and visit their special shopping places and break bread with them!
Hugs, Sherry
Since I have already won a giveaway from you, you don't really have to enter me. It was just fun telling you what my dream is!

My dream is that Lexi (my daughter) grows up to have success and happiness in whatever she chooses to do in life.

My other dream is to win the lottery someday.....lol

Oh! I saw letters like these @ Joanne's a few months ago and didn't get them because I couldn't decide how to use them. You've really jazzed them up!
My dream right now is to be healthy enough to return to work. I have been out of work for almost 2 years, and I'm not allowed in public places without wearing a surgical mask and rubber gloves. No movies, no live theater, stores only on off-hours when absolutely necessary, no one else's home. Good thing for the Internet!

Hi Joanne,
What a great idea. I've seen the letters and haven't thought about how fun it would be to make something so fun. You can enter me! Come visit me and see my little give away. Thanks too for leaving me your kind comment. Warmly, Deb MY DREAM, THAT NO CHILD WOULD EVER BE HURT AGAIN.

Hi again Joanne,
I forgot to say I think you found some very nice treasures. The plate is very pretty and really like the candle stick holders with the crystal's hanging from them. I have you on my Great Gal blog list, would you consider adding me to yours? Warmly, Deb

My sweet little cottage chick, I'd be honored to hang that in my home!! It's adorable!!!! Put my name in the hat and let me know if you consider bribes, chickee!!!! Hmmmmmmmmm?????
Smoochies,
Connie
;-)

What a neat idea...a quickie give-away!!! I like it...and I might have to try it sometime, too!

My dream - well, Tom's and My dream is to one day own a Bed & Breakfast in Door County, Wisconsin! We'd have to have a windfall of $$$ or someone just give us a B&B...but we'd be up for the work of making it the BEST place around. Our B&B would have the MOST comfortable foam mattresses, down pillows and comforters and be designed by me. Of course, all the baking and cooking would be done by me, too! Tom would be the gardener and helper around the B&B.

I have been reading your blog for a couple weeks now, but have never commented. I love your garage sale finds. And definitely, the crystal with the candlesticks.

My short term dream, at this point since I am 36 weeks pregnant, to have a smooth, easy delivery with a healthy baby.

my DREAM is to own my own antique store someday :) i love your letters - I saw these too at Joann's but I did not buy any ( I was already buying too much). Your rhinestone buttons are the perfect finishing touch! Erin

Right now my husband and I are dreaming about selling our home in the next few years and moving. I'm already looking at real estate and dreaming about a huge closet and lovely master suite.

My dream is to buy a house in Colorado so I coyuld fly back and forth between there and NYC and be clsoe to both my daughte rhere and my son and daughter-in-law and soon to be grandson there!

Absolutely lovely! Let's see, my dream is grow old with my husband and watch my daughters grow to be happy and healthy.:) Thanks for the fun giveaway! Lori

My dream is for my son to be sucessful and happy in everything he does. Also for my husband to retire and for us to finally be able to travel.
Love the little cup you found!

Very cute. I was lucky one day in my usual thrift store, I found dream in black metal letters.
I love the saying because it can mean so much. Dream of peace, dream of love, dream of friendship etc.....

Have a great week.

Hi again Joanne!
Did you already have your drawing on the French giveaway? If you did I missed it and will take the add off for it. Let me know sweetie!
Hugs, Sherry

My dream is to learn how to be the best encourager, support and comfort to others at all times. I want to live the life God wants me to live through Christ.

Thanks so much for the giveaway!!! How exciting! :)

Hmmm,right now my present dream is to get my jewelry selling, I am such a lousy self-representative....my long distance dream is to find someone special to spend my future with and maybe do some traveling....upper California, Washington, Oregon, and then a big jump to Ireland, England, Greece.......thin line between dream and fantasy....ooo and I like the crystals on the candlesticks.......you find the best bargains!

I just ran across your blog what a fun giveaway! My dream is to go to Germany to see where my family came from. I hope to do that one of these days. :)

Hi Joanne~My dream is to see my children graduate college (almost there) and get married to wonderful Godly people!
Have a great day!
Kim

How fun to have a spur of the moment giveaway, I love those!!

But- I would like to see my oldest son find someone special. That could be the only thing my life is lacking.

ps- you are #7 in my little giveaway, if you'll send me your address, I'll send you some bath salts.

Please enter me in your dreamy giveaway! My dream is to grow old with my husband and to have my own successfull business.
emily

Good Morning My Friend! Look at you being so creative, I also LOVE yor recent treasures you found, I need to do that, I have been so busy working I have not had time. I wll be doing another giveaway soon! have a Wonderful Day my friend! XO Diana Lyn

Hi Joanne, I'd love to enter your giveaway. My dream is to go to Alsace and see where my Great Grandparents grew up.

What a darling giveaway idea! I would love to see that sign hanging in my workroom where I should be RIGHT now--working---on my little business of designing patterns. That is one of my dreams, selling patterns of items I design and sell in shows and in shops. I just need a little fire of enthusiasm and "dream" over my desk would do it! :-) More important dreams are of the continued health of my husband (who has had some bad experiences) and of the health and happiness of my children, my DIL and my grand girl and certainly of my friends. A great idea!!!

Oh, I saw those letters at Joann's also, but they were out of some of the letters, so I didn't get them. Your idea is darling. My dream is to get my sewing/craft room shaped up so I can create easily! Nerm

My dream is to keep my family healthy. Wealthy and wise would also be nice, but I'd be happy with healthy.
Theresa N
weceno(at)yahoo(dot)com

My dream is to find happiness in the simple things in my life and quit worrying about what I dont have....

So glad I have you my friend.

Ohmygosh, ohmygosh, I can't believe this!!! I've won 2 giveaways today!! I am sooooo truly blessed. My sweet chicks, you will want to read my blog tomorrow also!! Surprises!!

Joanna, I don't have your email address. Mine is on my profile page to go there and email me; I'll email you back and I can chuckle with delight at winning that gorgeous sign!!!