WHAT A GREAT HAUL I CAME HOME WITH!

Today my sister, Maureen, and I went to Oceanside to visit with our brother, Gene. We got down there early and thought we would stop by a thrift store we were by.

I'm thrilled that we did because I found some great pieces! I thought I would share them with you. Come take a look. 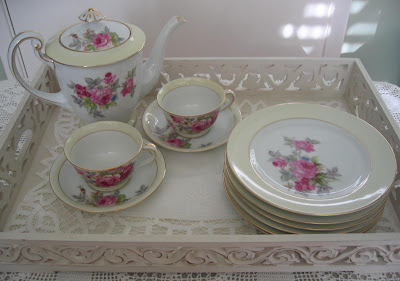 When we first walked in I saw this wonderful collection. I was going to get the tea pot and one tea cup and saucer but then I noticed it was being sold as a set so I just had to get them. I also got the tray they are sitting on since it was only $3.00. 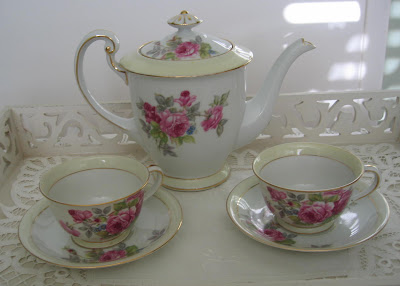 Wouldn't they be pretty to have tea for two? 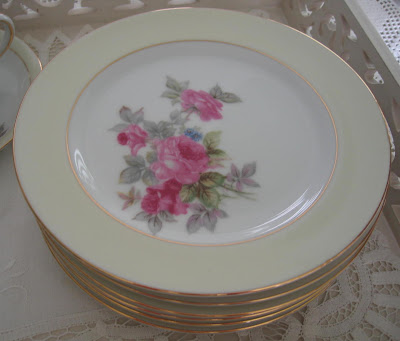 I could see a slice of a pretty cake on these. 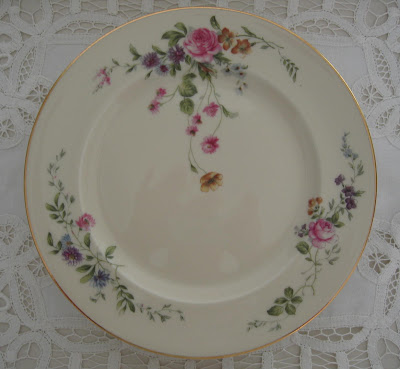 Then I noticed this set of four dessert plates. I thought they were pretty and they were only $4.00 for all of them. Who could pass these up? 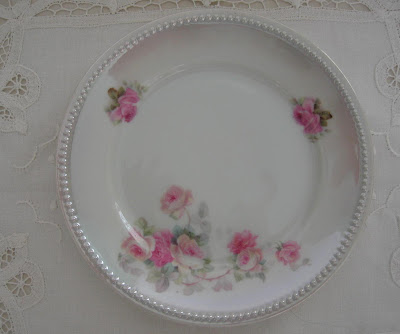 A little further into the store I saw plates and this one was on top. I picked it up quickly and saw it was only 65 cents. It went into my shopping cart right away. I'm going to hang it up in my office. 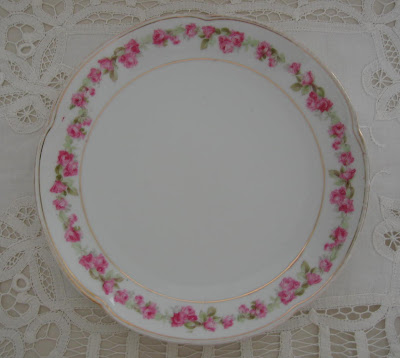 Then I spotted this pretty little plate that is surrounded with roses. Again 65 cents. Guess where it ended up? Yes, in my cart. Again, another lovely for my office. 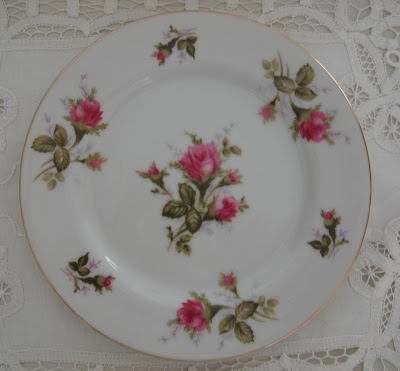 Well, since I was on a roll there was no way I could leave this little rose plate behind. Once more 65 cents. Sold! 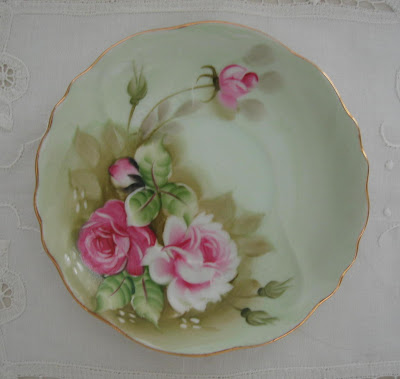 I almost missed this little hand painted plate. It was sitting off by it's lonesome self. I think someone started to get it then for some reason put it down. Either that, or they were trying to hide so they could come back later and get it. To bad for them. It's now safely in my home all cleaned up and ready to be hung up.

I guess you just never know when you will find some great treasures at the thrift stores. I had been to this one several times and hardly ever found anything. But today I lucked out. Maybe they just got these all in or something. I don't know what the reason was. I was just happy with my finds.

BTW, my brother, Gene, is doing great. Today we all went out to eat at his favorite restaurant. It was the first time he went out to eat since his stroke. It's good to see him starting to get back to his normal life again.

Posted by Joanne Kennedy at 7:43 PM

You got some great buys! I love all the new to you dishes!

I'm so happy your brother is doing better!! That is wonderful news! You got some amazing things at that thrift shop. I love anything with roses and I would've snatched those up also. I can't believe the prices! Meant to be!!

Okay, hands in the air, put down the plate/saucer/cups and step away from the thrift shop!! No one will get hurt!!! I'll be in Calif. next week and will make a trip to Oceanside. I'll bribe my son to take me since he was born there!! NOW, WHAT IS THE NAME OF THAT THRIFT SHOP AND WHERE IS IT LOCATED, my little cottage birdie?!!?!!??? You did fantastic, sugaaaaaaaarrr........
Smoochies,
Connie

What a blessing that Gene is doing so much better...and how great that you even got to go out to eat together. I hope he just continues to get better and better with each new day.

Boy oh boy did you hit the motherload of deals! Plates for under $1.00...unreal. I loved them all! I want to see pics of them hung up and pretty in your office!

I am envious of your awesome finds. I adore plates with roses on them and it looks like you hit the motherlode. Good for you, enjoy them, but leave them to me in your will. :) Lots of love to you my friend.

Great scores!!! You found such beautiful cheap treasures - how much better could it get?? Enjoy! Karol

OMG! I love your tea set and all the other dishes! so glad your brother is doing better :)

You have a great blog and a good eye for a bargain, this china is really pretty, I think you might just be right about my bedroom, thank you for your sweet comments, Kathy.

You did well my dear with your finds. That set would be fun to use out in your garden for a tea party.

Glad to hear about Gene. He's come a long way.

Wow, what great finds! I love the tea set, it looks beautiful on the white tray.

Am so glad to hear your brother is recovering from his stroke. I understand how hard that is on the whole family, my mother had one several years ago.

Have a wonderful 4th of July Joanne.Again, I just love your blog!!
Jackie

It is great that your brother is doing so much better. I think I would be going to that thrift store daily!!! What fabulous treasures you found, they are just BEAUTIFUL and what a price!!

What great finds! I love your plates...beautiful!!

I'm so glad your brother is getting better! And, wow, girl you did good with those plates!! I am so envious! When are we all getting together for lunch and thrifting?

how beautiful are those plates! whoo and a hoo! don't ya just love those 'right place at the right time' finds? so happy to hear that gene is out and about..eating at his fave place..happy news! now ya gotta show us when ya get all those purty plates hung in your office.

Wow, you made a great haul! Great job, love all those roses on those beautiful plates.

Good news about your brother.

Those are amazing. There is no way I could have passed up that tray or lovely tea set. They are so beautiful!! I'm so glad to hear that your brother was able to get out. I bet that lifted his spirits!

Wow, you really lucked out with all those! I want to run to the thrift store right now!!! I love them all, especially that hand painted one! Happy 4th! Glad to hear your brother was able to get out. I'm sure he enjoyed that!

I have so got to be finding me a bargain soon! I love that tea set! It is worth 4 times that, probably more! Good find.

Oooh Happy Day for You!!

~swooning over the rose china pieces~

You found the pot of gold!!

Joanne you and Sherry always find the best bargains! I wish I could go shopping with you both.
I love that teapot set -- great buy!
Hugs, Pat

Joanne, I'm so happy to hear that Gene is doing so well!!!
Okay, I cannot believe the deal you got on all those plates! They will look beautiful hanging, and they all coordinate so perfectly! Great tray, too!!!...Donna

Hi Joanne!
WOW! I absolutely LOVE all your finds! What beautiful dishes... the teapot is gorgeous... the cups & saucers are adorable... what time shall I show up for the tea party and one of your fabulous cakes? Let me know and I'll be there!! I think you got, as they say, "the Motherload"!
I'm so happy that Gene is doing so well. The blog you have for him is wonderful. He's a good lookin' chap! And he's going to make a difference in some peoples lives with the blog you've started for stroke victims.
Hugs, Sherry
I'm going to get ready for the tea, shall I wear my white gloves and hat? or just my sun hat for the patio in your garden?

I just came across your blog -- love it! I was at a thrift store yesterday and came home with $26 worth of stuff, but nothing as nice as all that china. Am I jealous! I am looking for a few more rose plates to hang on a bedroom wall.

You found some great pieces. I am also a fan of dishes with roses on them , especially the one you found by itself with the painted roses on it . I have a few like that myself & I display them .
Happy treasure hunting ! Sue

I love every single piece but the next to the last one is a pattern my Mother collects and I will someday inherit. It is definitely my favorite. Great shopping!

Wow what a great find! Love the colors of the plates too.

Score on the thrift store finds! So glad your Brother is doing Better! Be well my friend! Diana Lyn

Wow, those are so gorgeous. There's a set of desert plates in your collection that looks a lot like my great-grandma's china, in safekeeping with my mom that I'll one day pass on to one of my daughters.

Pinks like you found, and blue willow are my favorite kinds of china. Really lovely.

Praise the Lord that Gene is doing so well. Oceanside?? I didn't realize Gene was at Oceanside. Hubby and I drove over to O from Temecula with nephew and family back in March. Lovely beach. I did miss the thrift store, though. You got some wonderful buys.

Absolutely gorgeous dishes! The tea set is beautiful. So glad your brother Gene is doing better!