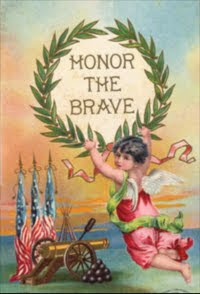 Where ever you go, what ever you do, I hope you will take a minute to remember all the men and women who gave the ultimate sacrifice for our freedom.

Yesterday, my sister, Maureen, and I went to visit the grave of my father. We put a flag on his grave and as we were leaving we ran into an older man and lady.

They were decorating the grave of her cousin who had fought in World War II. The lady told us the story about him and how he got hurt durning the war and was missing for a year.

Her family was so worried about him. They finally found out his feet were very badly damaged and he was finally set back to a VA hospital here in the USA.

The man told us a story about how he was in the Armed Forces one year before World War II started. He told us about the men he knew who flew supplies over to China with him.

There were over 600 planes that crashed and many men were lost. I had never heard these stories before. He explained that it is often referred to the Unforgotten War.

Sometimes we tend to forget or over look the loss of life that takes place when we are not at an "Official War". So many stories that we never even hear of.

This Memorial Day, while we are eating our BBQ, I will be thinking of all those lost life's and the families that were left behind.

May you all have a wonderful Memorial Day and May God Bless America!

Posted by Joanne Kennedy at 6:37 PM

Thanks for a wonderful post! We must all take a moment and think about those who fought so that we could have our freedom. My Dad was in World War 2 and I love to hear him tell his war stories. He is so proud to have fought for his country!! Hope you enjoy the rest of your holiday weekend. Love & blessings from NC!

You said that eloquently, sugar. I have a post up about that today with memories from WWII.

And you can also see my new great granddaughter!

We keep our flag up on all holidays. I love our fighting men and women who protect me and my country...