SOMETIMES YOU JUST NEED TO GET A FAIR CHANCE IN LIFE 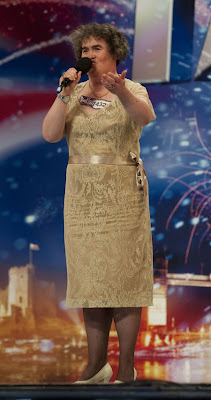 I'm sure by now most of you have heard of Susan Boyle. She is a 47 year old lady who is unemployed, nothing special to look at, has never had a boyfriend or even been kissed. She lives alone with her cat. She seems like a nice lady.

Yet, when she walked out on the stage, of Britain's Got Talent, most people in the audience, including the three judges, rolled their eyes and chuckled when she said it has been her life long dream to be a professional singer.
They clearly didn't expect this woman to provide them with anything more then a few laughs and witty words, as they bid her farewell and watched her walk off the stage feeling nothing more then rejection.
Sarcastically, Ms. Boyle was asked why she never became a professional singer. Her reply was "I've never been given the chance."
The judges then told her "Go ahead then, here is your chance" and gave her the nod to start singing. The music played and she started to sing. The cameras were watching the people in the audience as well as the judges. There were no more eye rolls or giggles taking place.
Instead there were mouths that dropped, eyes opened wide and looks of disbelief upon the faces who heard her sing.
You see, this lady whom everyone expected was going to sing off key and make a fool of herself, had a voice from Heaven. There was no one in the room who could take that away from her. It was lovely and brought many to tears as they listened.
The judges were blown away and said she was the best they had heard in three years that the show was on. They were humbled and admitted they didn't expect that voice to come out of her body.
Ms. Boyle has quickly turned into an over night star. Showing up on YouTube and every news station here and abroad.
I am absolutely thrilled for her. She alone proved to the world that we should never judge a person by the way they look. Everyone should be given a fair chance at life, as you never know what gifts a person has inside them.
If you have not heard Ms. Boyle or seen the video on YouTube, please click here to watch and listen for yourself. I have no doubt you too will be pleased you did.

I cried hearing her. She is going to get attention like she never knew. I would not be surprised if she was invited to sing for the Queen.

You could see in Simon's eyes and body he was blown away and exhilarated.

Wasn't that amazing... I love what the female judge said... I watched it last night on youtube and I so excited by her!!!

She seems like a wonderful and fun women too...

Thanks for sharing my excitement about her too!!!

AMAZING!!! Listening to her glorious voice with chills and tears at the same time!
You are so right~~this is a true Cinderella story~~and she definitely has won the hearts of millions! BRAVO~~for all of those who do dream....dream BIG!!

Lovely way to start my day~~~
Thanks so much
~Lynn

It's such a lovely story! I've seen it twice and it bring tears to my eyes even when I just think about it. Such a touching story. I hope she goes far with her singing talent.

I watched her and loved her too, so I put a little something about her on my post today. Yours is much more descriptive and thorough though, very well written. Isn't it fun to share something so uplifting with everyone! I know it made my day!

She' amazing! What a wonderful talent!
I found a site about Vintage Trailers from another blog. It's called Doug's Vintage Trailers and they have a trip to Wrightwood in June for people who own them. Maybe if you get one you might like to do that. Have a great day!
Susan

You are right, what a voice! What a nice person she seems to be too.

I saw her last night on our news...she's just incredible!

I saw her on the news and heard her sing but NOT before I read it here this morning!! My God...I get more news in the blogs than I do on tv and radio!! Thanks for the heads up and I love what you wrote about her. You are one of the many, many, wonderful writers in these awesome blogs. Keep it up! You gave her a beautiful tribute.

Wasn't that just the most amazing thing! I was so happy for her!

I think she pretty much blew the world away with her voice..and also her ..just being her. I have watched it a few times and it is always amazing..how perfect she was.
You wrote beautifully about her. Thanks, Joanne.
Love,
Mona

Joanne, I have this on my sidebar. I cannot get enough of it. Every time I see it on a news report or show, I have to stop what I'm doing and watch it again. She has touched people in so many ways! Thanks for sharing... Donna @ An Enchanted Cottage

It was just so moving was'nt it!
Gee,has it been the talk of the town here

She is so wonderful! I loved hearing her sing! My Hubby said, That's why You Should Never Judge A Book By It's Cover!

I'm so glad to see this humble, unassuming woman finally get the chance to awe the world with her gift. She's got some spunk too! I hope we'll see and hear more of her in the future.

Thank you so very much for sharing this with us. What a blessing! I cried because of her talent but most of all for her pure & humble spirit...sharon