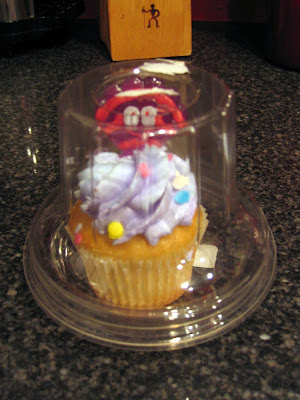 Since I have been going to some pretty fancy bakeries for all the cupcakes, I thought it was a good idea to try a bakery from one of the local grocery stores.

I went to Von's near my house. They have a bakery in the store. Sadly, I forgot my camera when I went, but, it's just your normal in store bakery.

I saw they had a few cupcakes in the case. But, they only had purple icing ones. I asked if I could get a fresh cupcake with regular white icing and was told I couldn't do that. They only had the few in the case to pick from.

So I got a white cupcake with white but dyed purple icing. It came with a little shell happy face pick.

I did like the cupcake holder they had. Good touch and was the best of all the cupcake boxes/holders I've come across.

Plus, the cupcake was only 99 cents. The lowest I've found. So far that's two pluses for this cupcake. 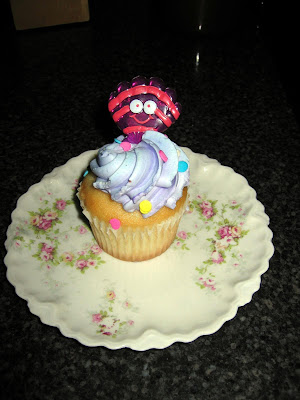 I have to admit, just looking at this cupcake put a smile on my face. I think it may have been the smile on the shell that did that.

I thought this cupcake sort of looked like a little party cupcake. Loved the little confetti on the icing. 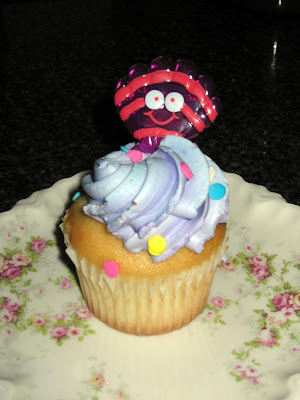 Now on to the taste test. The cupcake had a nice vanilla flavor to it. It was very light and airy. It almost taste like an angel food cupcake. I enjoyed it.

The icing was very light and airy too. Though it was clearly not made with butter. More like a store brand Crisco. There really wasn't much flavor to the icing at all.

It was an OK tasting cupcake. I don't know if I would buy these again though. There are so many other better cupcakes out there. Maybe for a kids party. Since kids don't really seem to notice the difference between a good cupcake and an OK one.

I would not buy these for any special occasion though.

I have to admit, it wasn't as bad as I thought it would be. For 99 cents, I think you get your moneys worth.

I'm pretty surprised at how different each cupcake has been so far. I really thought a cupcake was a cupcake but clearly that is not true.

This is a fun experiment for me and I'm happy you seem to have been enjoying it too.

If you have a place you want me to add to my taste test just let me know and I'll go there.

I usually don't like the cakes and cupcakes that you buy at grocery stores. They have a funny preservative taste to me. In my area, we have a wonderful regular baker that has great fresh tasting products. There's nothing like homemade, though.

Oh, by the way, I LOVE, LOVE, LOVE, the plate the cupcake was sitting on. I love to use dishes like that to make simple things special.

Glad you chose a grocery store to compete with the others. Our stores usually dont' have very good cupcakes and we have but one bakery in the local area. I wish we had more and I think that maybe Portland, Maine has a better selection. You make my mouth water with each post and feel like making cupcakes every time I read what store your visiting... keep it up. I love cake!!

I have a whole new perspective on cupcakes now that I have been looking at your stories about them. Really interesting...doesn't help me with my diet but it's very cool! I love cake so it's hard! You have captured some lovely places with unusual cupcakes. Thanks for taking the time to share all of that info.

Here I am, salivating again... Ha ha! Baked goods are my weakness, and cupcakes are just so darn cute (and good!)... You know, I'm going to have to check into junktique stores in the Boston area. I've never ever looked for one in the city!... Donna @ An Enchanted Cottage

Do you have a Bristol Farms near you? They have amazing cupcakes!

Do you ever look at Yelp? After you started your cupcake test, out of curiosity, I went to Yelp to see how people there rated each cupcake bakery you were trying. Two of the highest rated cupcakes were SusieCakes (2043 Westcliff Drive, Ste 104, Newport Beach) and Bristol Farms (Opposite from sprinkles across the parking lot). Since the Yelp people thought those two bakeries rocked it out far above all the rest, I'm really curious how they rate on your taste test scale.

Also, I'm curious too about what you would choose to bake. The cakes that you show on your blog that you've baked, always look beautiful, what cupcake do you like to make?

Thanks for all the testing. It's a hard job. Glad someone tackled it. ;)

Cheap, Not you the cupcake.

I much prefer the bakery kind. Hey when you are here and we are in S.F., they have wonderful bakeries in the City and we can continue the taste test there too.

I have kept up with your cupcake theme and have enjoyed every single one. But if I tasted all of those I would gain 50 pounds just thinking about it. I almost could taste that red velvet..hmmm..gotta go eat some carrots instead of baking..tks sharon

I have been reading through your cupcake posts. We have some wonderful little bakeries that create beautiful looking and tasting cupcakes. A little on the spendy side though. When I lived in So. Ca, I lived at Von's and Boy's Market.

I will never look at cupcakes in the same way.

I still think the cupcake tasting is one of the best things anyone has come up with. :) Nooot too sure about Grocery story bakery. Wish you could have been at the shower..you would have LOVED our cupcakes...GREAT! :) I thought of you my friend!
Mona

Not so sure about how it tasted..but it sure was cute. I go for lots more frosting though. I like cake..but it has to be generous with frosting..same with cupcakes. :) Cute though.

My days of grocery cupcake phobia have been cured. After our local grocery put in the most phenomenal bakery that carry a multitude of sweet decadence...including cup cakes. We were so pleased with their confections we served an array of them during my sons wedding of events.