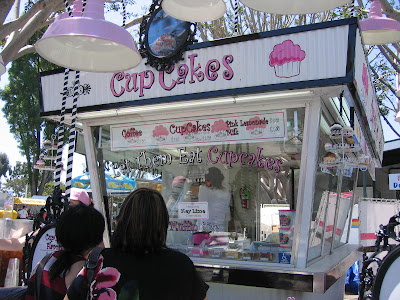 Today I'm going to review cupcakes from a small stand I came across while I was at the Pet Expo.

I know! That is the last place I would have dreamed would have cupcakes too! 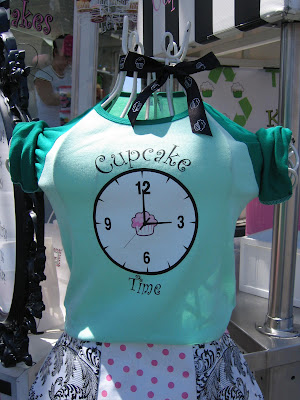 We were on our way out when I noticed this little stand. At first I didn't think much of it. Until I saw this darling shirt out front!

Cupcake Time! Wait a minute...is this a cupcake stand? 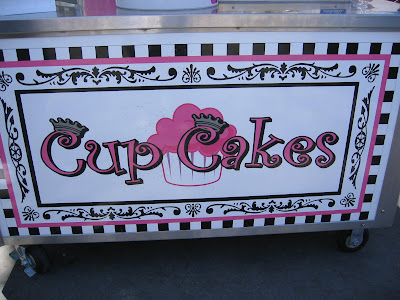 Why sure enough it was! I have to admit I wasn't expecting much. After all this is at a Pet Expo. But what the heck, I'm doing a cupcake taste test so why not? Besides, who really needs a reason to eat a cupcake? Not me. 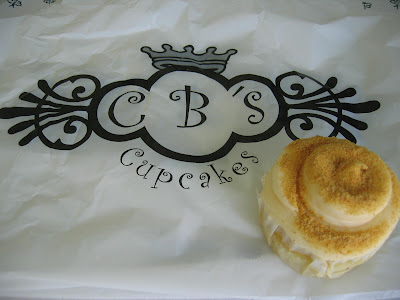 I found out the little stand was CB'S CUPCAKES. I had never heard of them but the girl who waited on me said they are starting to open up in different malls and have been going to several County Fairs.
Again, I wasn't expecting much. They did have several different flavors to pick from. Plus you got to pick your icing and they put it on right there in front of you.
I asked her which flavor was the best. She said her favorite was the Key Lime with cream cheese icing. Topped with a little bit of gram-cracker crumbs to make it like a Key Lime pie. 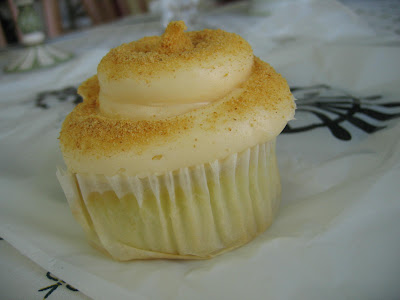 I had never had a Key Lime cupcake before so I agreed to give it try. She promised I would not regret it and in fact said she was sure I would end up going back when the Orange County Fair comes in July.
So, the cream cheese icing was put on and the top had it's sprinkles. It was given to me in a clear plastic box that was then placed inside a bag with their name on it. So far, so good.
I took it home with me as I was not hungry then and since it was in a box I knew it would hold up and look the same when I got home.
That night I tried it. I was in shock! At first it had a mild taste. Then the Key Lime flavor kicked in and mixed with the flavor of the cream cheese icing.
I could not believe it! This was the best tasting cupcake I had ever had! It was full of flavor, moist and... well, it was just perfect in every way!
I really did not expect this at all. I thought it was going to be hard to top the cupcakes at WONDERLAND BAKERY. But this cupcake actually blew them away.
Just goes to show you that sometimes it's the little unknown, hole in the wall places that produce the best items.
The girl was right. I will be going to the Orange County Fair and hunting down CB'S CUPCAKES. Only this time, I'll be buying more then one cupcake to take home.
So far CB'S CUPCAKES is winning this taste test.
Tomorrow I'll be trying cupcakes from LET THEM EAT CAKE. They are very well known. Many stars have ordered from them. They won several cake challenges on the Food Network. I'm looking forward to trying one of their cupcakes.

Be sure to come back and join me.

What fun! and what a creative cupcake stand. I think they are going to make boo-coo bucks!.So why didn't one of us think of a traveling cupcake stand. A great post and thanks for keeping us posted.
Enjoy your day,
Elizabeth

I saw that cupcake stand at the LA County fair last September but the line was too long so I passed on it (plus it was late in the day when I spotted it and I wanted to go home). Had I only known! Key lime is one of my absolute favorite flavors. I wonder how hard it would be to try and come up with a homemade key lime cupcake? I really like the idea of the crumbs sprinkled on top of the cupcake. I'm going to have to google key lime cupcake and see if there are any recipes floating around out there.

Thanks Joanne, next time I see the little cupcake stand at a fair or where ever, line or not, I'll try a key lime cupcake!

Glad it was a good as the girl said.
P.S. aren't you glad we've cooled off? It's only 82 here today and I'm loving it!
Enjoy your day!

Cool! I wish I had gone to the Pet Expo this year! I will definitely go to the fair then and find them. Thanks for the heads up!

OK, cupcake. We'll be waiting on the review, and you'll have to go back to your favorite and bring some with you, when you come up.

Wow...who would have thought there would be so many cupcake places. I love the pick your own icing idea...fabulous!

What a week you are having. Maybe I should think about going on a cake tasting spree, or pie, or brownies...
Everything looks yummy to me, but your key lime one looks delicious!!!Sounds like it too!

That sounds fabulous! I hope that they are at the LA Convention for the Baby/Tween Expo this weekend.

This is a great series!

WOW! That is so exciting and surprising! It looks so pretty. That combination sounds delicious!

I wish they were in a mall near me!

BE SURE TO COME BACK AND JOIN YOU?? Are you kidding?? You couldn't pry me off this blog with a crowbar.... Wow...I usually don't eat cupcakes..but now ..you have me wanting one..and it has to be the KEYLIME one!!! :) What a great idea posting about cupcakes was. Whodathought!! LOVE it.
Hugs..
Mona