THE HOUSE WAS HAUNTED AND I DIDN'T EVEN KNOW 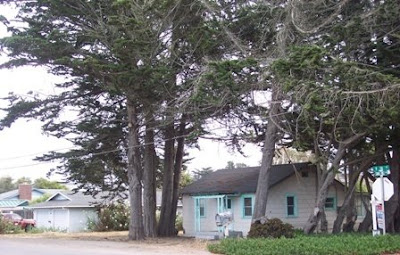 Not to long ago I wrote about the little house that my Aunt and Uncle owned. They both passed away and the house was left to my sister, Maureen and me.

What I did not tell you was the it turned out the house was haunted. That's right! You heard me. Haunted. I have no idea by who though.

In fact when we owned it I didn't even know it was haunted. I found out it was just this past week.

Our niece lived in the house for a few months. She was living near by and going to school. She needed a place to stay as her roommate had moved out and she couldn't afford to stay in her place alone.

She moved in and started to fix the place up. She painted, got new floors in the living room and then all of a sudden we were told she didn't want to live there any more. No warning. No real explanation was given other then she found a new place to move to. We thought it was strange but figured maybe the house needed to much work done and it was to hard on her with going to school and working full time.

So she moved and the house sat empty until we sold it.

This last weekend I was visiting with my brother and SIL, her parents. Some how we started to talk about ghosts and haunted places. I then said "I'm surprised that old house up North wasn't haunted." Then my SIL looked at me with a surprised look and she said "Amber never told you?"

I had no idea what she was talking about. She then went on to say that several nights Amber heard walking and different type of noises in the basement of the house. She also felt like she was being watched by someone when she was home. She didn't want to tell us because she didn't want us to think she was crazy.

Turns out Amber was to scared to stay there any longer and moved out.

I have to admit that when I went in the house I often had a strange feeling. Sort of like I was invading someones space. Even though the house was empty, it was as if I was walking through a house where someone lived. It's hard to explain.

The basement gave me a super strange feeling and I NEVER went down there. At the top of the stairs was an old wooden screened door. I opened it and that is far as I got. I couldn't bring myself to go down there.

To this day, I have no idea what it looks like down there.

So when I heard the story about noises coming from the basement I believed her.

However, I'm really disappointed Amber never told us what she had experienced as I would have loved to gone there with a Paranormal group to see if we could have found out what or who was making the noises.

I'm 99% sure it isn't my Aunt or Uncle. But, I do wonder if they felt it was haunted way back when they lived there and that was why they really moved away.

Now I guess I'll never know. I wonder if the new owners will discover anything now that they are living there.

Posted by Joanne Kennedy at 6:17 PM

How cool! I love haunted things and such! Whenever I visit old cities I always take their ghost tours LOL. Too bad you never got to check it out!

Oh, darn. We could have gone there and seen who was there. What about the people that lived there all those years, don't they have any experiences ?

I must of been an old workshop.

Joanne! Ohmigosh, I can't believe your Aunt and Uncle's house was haunted and you didn't even have the opportunity to explore a little more. :( I'm so happy you are able to join a group where you live!! Excited to hear more and I am SO jealous you are going to explore San Juan Capistrano! I am certain it is haunted...so many memories...so many graves. Oh you need to tell me how that goes. I'm dying to know (no pun intended). ;)

Sounds very exciting Joanne. Too bad you couldn't have done some investigation. My house has had 2 people die in it. My husbands grandmother died when she was struck by lightening walking through the house and his cousin who was living here at the time was brutally killed in a laundromat ...funny thing, they were both named Dottie... no signs of anything,, but would love to know if it exsists anyway.. happy haunting..

Oh I wish your niece told you! That would have been so cool to have some ghost hunters explore it!

Have you talked to the new owners? I would love to know if they hear anything! Keep us posted!

That is FREAKY!!! It would be interesting to find out the history of the house. Maybe something weird happened there??

You do live an exciting life!

That's so awesome...I would have loved to go in that house...not sure if I would be afraid or anything tho!

Have a wonderful weekend!
Hugz,
Michele

How fun and scary. I love watching all of the Ghost Hunting and Paranormal shows on TV. I am a believer, I've had a few family members that have experience with communicating with the "other side", including a bit of something called table-tilting. I don't think I'm brave enough to go exploring in this area myself though, I'm a bit of a scaredy pants! Have a great day!

That's so interesting! I once worked at a house that was built in the 1700's and it was supposedly haunted. It was a place that took in people during the war and hid them. The owner would see a man walking up and down the stairs once in a while when no one was home but her. Also, the smell of bacon cooking in the kitchen and no one was cooking. Freaked me out! Great story if you ever find out any more about it. Just goes to show you...trust your instincts.