The other day my phone rang. Before I answered I looked at the caller ID. I had no idea who it was. I thought it was going to be another one of those pesky sales calls or a recording asking me to vote for someone.

When I answered a ladies voice asked if I was home. Part of me wanted to say "No, she isn't. Can I take a message." but, I admitted it was me on the phone.

She told me her name and said she belonged to a cat rescue group. I wondered why she was calling me. Was she going to ask for a donation. I would gladly donate to an animal rescue group as long as I could verify they were real.

She went on to say that she got my name and number from some other lady that I didn't know. To make a long story short months ago I had been on Craigslist and saw that a dog rescue was looking for someone to help out by picking up a dog from the pound and bringing it to the Vet who offered to do a surgery for free. So I sent an email and said I was free and would be happy to get the dog for them.

Turned out someone else wrote to them faster and I wasn't needed. But, this lady kept my name and number and passed it on the lady on the phone.

She had two cats, at an Animal Hospital, who had just had surgery that needed a ride to her place in Los Angeles.

I told her I would be happy to get them and bring them to her. 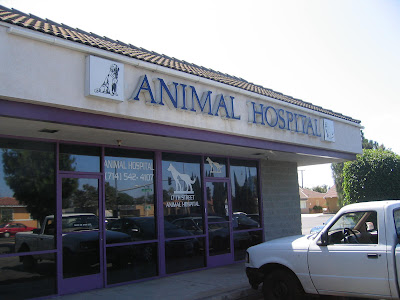 I pulled up to the Animal Hospital not knowing anything about the two cats I was picking up. 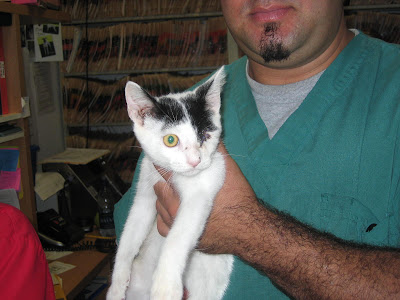 Turns out this one above was a kitty and needed to have his eye removed. No one knows what happened but the eye was all infected and the kitty could no longer see out of the eye.

The cats name was Amber. Amber? How strange. I thought I was picking up two male cats.

Yes, Amber turned out to be a male cat after all. But the girl at the pound thought he was a she and gave him the name Amber.

Let's hope Amber's new mommy or daddy changes that name. Poor little guy has been through enough trauma already in it's short time on Earth. 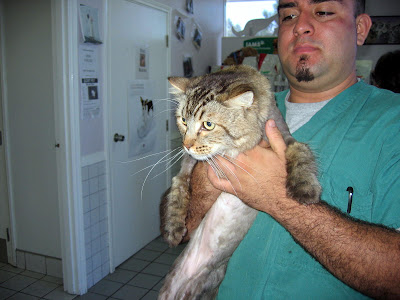 Then there was Rocky. He is a Maine Coon cat. My last cat was a Maine Coon. I just adored her and still miss her so much. Rocky had her same coloring.

He is a big boy. But sadly very skinny. I was told his long hair was matted so badly they had to shave his hair off. Plus the poor guy has to have insulin for life.

I got both of them into my car and drove the hour to the home of the rescue lady's house. They both were so good. The little kitty didn't make one sound the whole way there. He just took a nap.

Rocky did cry at first but then as long as I had my fingers sticking in the carrier he was fine. After about 15 mins he just laid down and went to sleep too.

Once I dropped them off, the lady told me Rocky was going to his new home in San Francisco tomorrow and Amber was being picked up later today by a woman who will foster him until he can find a forever home.

It was the first time I really saw how so many people pitch in help out these rescue animals. Really it's a long chain of loving hearts all linked together that allows these cats and dogs to get to their loving forever homes.

I was so very thankful to be able to put my link with all the others and make it possible to give at least these two little guys a nice safe home.

I told the lady that she could call me anytime they had other cats or dogs in my area that needed a ride. So, I'm hoping I can help form many many more chains of love to help the sweet loving dogs and cats find their way home.

It was not a job or chore. It was an honor to be able to help out.

Posted by Joanne Kennedy at 9:41 AM

You are such an angel! Those kitties look so sweet. I miss my Harley. He was an orange tabby with white paws. We called him Harley because he purred like one!

High Five to you and all our other fellow rescuers!

Joanne, You are amazing! You're always up to something and it's always good. Your life seems like one continuous adventure. Hugs to you!

I like this story. I would do the same.
I would fear I would want them all. But would know that it was only for the moment.

You are just the sweetest!! I simply adore cats and dogs and I think that is fabulous that you helped them. I would also want to keep and help all of them.....I truly hope they find forever loving homes.

Oh Joann You are such an sweetheart ,
thanks so much for helping the darling little critters(:) hugs Patty

Well, I have never met you, but clicked over from another blog. So glad I did! I am such an animal lover. And want to know other animal lovers! I commend you on such generosity. If only there were more kind souls like you out there! I would love someday to see more facilities for victims of domestic abuse to be able to take their pets with them. Lots more women would leave; and lots more pets would keep their homes! This has been on my mind since I saw an article about a "hero" who created such a place in her hometown a few months ago.
Brenda

How sweet you are! Poor little kitties! I'm so glad they are being well taken care of now! We have a new kitty at our house now. She is so sweet! Hope you are having a wonderful weekend!
Kim

What a marvelous and kind thing you did. I hope the kitties have wonderful life full of kindness and love. The world needs more people like you. Have a great week.

THE HOME THAT LOVE BUILT said...

How very kind hearted oif you!!!

Joanne, you are such an angel with a big heart to do this! I'd love to be able to give you a {{{{{{{BIG HIG!}}}}}} Those cats were lucky to have so much love from strangers.
My dear cat is a rescue, and so are my daughters two kittens. There are so many animals in need, and they give back so much love.

Another page in the wonderful story of your life. I love that you are so giving and generous and kind-hearted. Being kind to animals is a very admirable attribute. You are a hero in many eyes.....

what a good deed. that was very nice of you, and a very good thing you were honest about being home. i sometimes feel the same way about those annoying sales calls. i am sure those two little kitties are thanking you very much right now!!!

What a very nice thing to do. You are such a sweet person.

And I am honored to know such a sweet hearted person as you! Thank you for helping those two guys Joanne!

Hi Joanne,
What a blessing to give to the cats and for you!! I think animal lovers are very kind and loving
people,(that's you)! I thought that you would fall in love with one of them and keep one :) I so enjoy your adventures/posts :)
Hugs, Deb

Life on an artistic shoestring said...

I do the cat rescue thing, too and like you, I feel it an honor to help these sweet spirits get to a good home. I am a link in the chain and enjoy being a part of a network that loves helping animals and so I know the warm fuzzies you must also get when you give your time and love for this great cause. Thank you!

Life on an artistic shoestring said...

do the cat rescue thing, too and like you, I feel it an honor to help these sweet spirits get to a good home. I am a link in the chain and enjoy being a part of a network that loves helping animals and so I know the warm fuzzies you must also get when you give your time and love for this great cause. Thank you!

Hi Joanne!
What an incredible experience! And EVERY link in a chain is as important as the next. But you were a very very special link in my eyes! What a great thing to do Joanne.
Thank you for the wonderful post to show people that anything they do to help is important.
Big Hugs, Sherry

That was such a lovely thing you did helping out driving those kitties. Hopefully the rest of their lives will be very good with all the helpful and loving animal lovers like yourself.
I hope you had a lovely day yourself, you deserve it.

I just happened to stop by your blog tonight and I am so glad I did. You have touched my heart with this post. Thank you! Animal lovers are the very best (yes, I'm talking about YOU!)
~Tracie

What a caring thing to do. I once had a Maine coon cat too. He lived 18 happy years and was the sweetest boy. I hope both kitties will find loving homes and that Amber's new owner changes his name to Abner...or not. :)

Joanne, what a wonderful thing you did in helping those sweet cats get closer to their new homes!