I think it would be fun if you would join in also and list 8 Crazy Facts about you too. 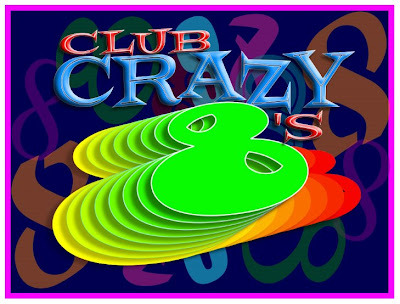 1. I've been sky diving. Only once though. I went up a 2ND time but wouldn't jump for several reasons. I came back down with the plane. It made the instructor so mad that he jumped out of the plane before we came back.

The instructor doesn't normally jump out. He goes back with the plane so he can be on the ground waiting for all his students as they get back to base.

2. I've lived in 18 different places. Nope, I was not from a Military Family.

All 18 places have been in CA.

3. Even though I moved around a lot, I live only 25 miles from where I was born.

4. I've owned 7 cars. Three of them were brand new. The other four were used when I got them.

5. I've been to two autopsies. The first one was when I worked in a hospital and one of the guys who cleaned up the autopsy rooms brought me in just as one was being finished up.

The other one,was when I was taking Anatomy and Physiology class at collage. A friend and I wanted to go to one. So,we called up a local hospital and told them we were in a class and wanted to sign up to see an autopsy done. The girl on the phone told us had to ask for this certain Dr. who was in charge.

We talked to that Dr. and he gave us the name of another Dr. who did the autopsies.

So,we called him and told him my girlfriend and I were taking a class and wanted to set up an appointment to see an autopsy. He asked who gave us his name. We gave him the name of the first Dr. we spoke to.

He then told us they were set to do an autopsy in the morning and to be there.

After it was over we talked to the Dr. and asked about how many people call up to see autopsies. He told us no one was allowed to go into an autopsy unless they were Medical Students or had family permission.

When we told him we were not Med students he was so freaked out. He never thought to ask us because NO ONE had ever called up to see an autopsy that wasn't a Med Student. We had to promise to never tell anyone he was the one who let us in.

6. I got my first Passport last year. I went on a cruise to Alaska and we had a 4 hour stop in Canada. But we still hunted down where to get our Passport stamped.

7. I have not eaten meat for about 2 1/2 years. One Thanksgiving I was helping my sister cook the dinner and she was cleaning the Turkey. She pulled out this gross looking part that looked like a big artery and it made me sick. I couldn't eat a bite of meat ever since.

8. I was an extra in two movies. The first one was Starship Troopers and the other one was Running with Scissors. You probably never heard of either of them...have you?

Well, I hope you had fun learning these 8 Crazy facts about me. Won't you join in and do your own Club Crazy 8 post. After all, we won't ever have another 8/8/08 in our life time.

Posted by Joanne Kennedy at 8:08 AM

I keep promising not to do THREE posts a day and here you are making me do a second one! LOL

Thank you for letting me know the package arrived and that you liked the items you purchased. It is so great to get feedback. Much appreciated!

Have a great weekend.

Hi Joanne,
AWESOME stuff. That was fun and a great idea. I'll try to play and think about 8 crazy things. :)
Warmly, Deb

Hi Joanne! I had trouble limiting my list to 8 but I did it. Now I get the message that Blogger is currently unavailable. I will keep trying until I get it posted though. Cute idea! I loved the stories about the autopsies and the sky-diving. Yikes! You are gutsier than I am, for sure!

OK, it finally posted! That was fun. Now I have to go check out some of the other posts in Club Crazy 8s.

HI Joanne!
I would have loved to join in but my Mom was visitng all day and I only had time to publish a post I had already written up.

Those 8 fun facts about you were really the most unique I've read! I went to autopsies too, but I had to do it for my nurses training and it wasn't a thing I was happy at all to do. I had to hold a tissue soaked with perfume to my nose the whole time.

I'd love to be a movire extra! Can you see yourself in the films?
My husband is in the background of a scene in the movie "Wall Street" because he happened to be watching when they filmed and he got into the scene unknowingly! He's there all of three seconds...lol!

The Spike Lee film "Jungle Fever" was filmed just a few blocks from where I live. It was fun watching all the work that goes into one little scene. I bet your never heard of that film...lol

Have a good weekend my friend!

The cupcake holders are by Robert Gorden these are his new range. (you can get cute them in pink, green and blue with dots on them as well) I am happy to pick some up for you if you wanted them they are AU$4.50 for a pack of 50. Not sure how much postage would be. Email me if you want some beksshabbydreams@hotmail.com

Hi Joanne,
Boy, we are up late tonight, both of us. I just finished that post and thought, "has anyone left a comment" We better get to bed. It's after midnight here. I'm going to try to sleep in :) Not with 3 dogs, but you never know! I could be blogging all night. The computer seems to work better at night and no distractions :) you know !!! Good Morning.
Warmly, Deb

I think were kindred spirits in some way. I have always wanted to go to the medical examiners office and observe an autopsy. I love to watch Dr. G.

Have a great weekend.

Joanne, I was going to try to do Crazy Eights but I couldn't get blogger to work. It would have been just under the wire. It's right now turning midnight and I've got to go to bed.

Hi Joanne-
Not a crazy 8 comment (loved reading them though), just wanted to say thanks for the nice words you left on my blog about my Halloween sketches. I haven't ever sold any of them, they are just quick little drawings for things I want to make in an idea sketchbook I keep. Just doodles, really. When I'm done with that page of drawings, you can just have it if you want it.
-Sue
PS Tried to email you with the address you left at the blog and it kept bouncing back saying that email didn't exist. Yikes!

Joanne
this was so fun to read!! you always make me laugh and smile!!
Im going to try to think of some myself. Thanks for the comment on my post yesterday, Im still trying to decide what to do...
Hugs
C

What a fun post! It is no interesting to learn more about everyone! I personally could never sky dive! Yikes! I've actaully heard of Runnng With Scissors but I cannot remember if I have seen it! How cool though to be in a movie!
Hope you are having a wonderful Saturday! Enjoy your weekend!
Kim

I love the the book Running with Scissors better than the movie! How fun for you! I also went sky diving once :) Erin