BREAKFAST IN THE PARK WITH TRINITY & THE DOGS

Early in the morning, Trinity (my great niece), came over and we thought it would be fun to go to have breakfast in the park. We packed up the dogs and headed out. 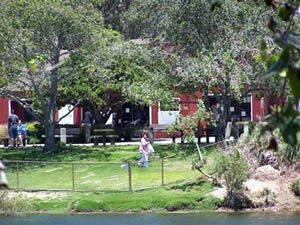 This little resturant is called Alice's Breakfast in the Park. It's tucked away, almost hidden in Central Park Huntington Beach.

The park is so big it takes two streets to hold it all. 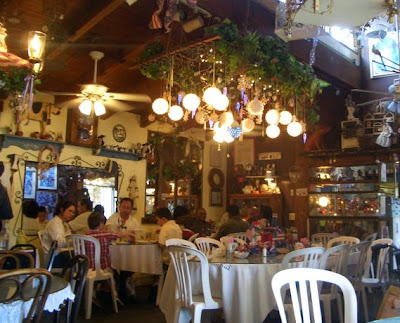 This is the inside of Alice's but, since we brought the dogs we ate outside. Besides, it was very nice out and Trinity wanted to eat out where the ducks were.

You can buy duck food at the resturant if you like. Of course we did! 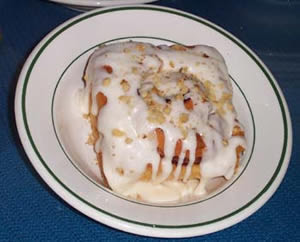 This little secret gem of a resturant is famous for their BIG homemade cinnamon rolls. Normally that's what I always get there. Today, I got fresh blueberry pancakes though. They were great. Trinity got an omelet with fresh fruit and potatoes. YUM! 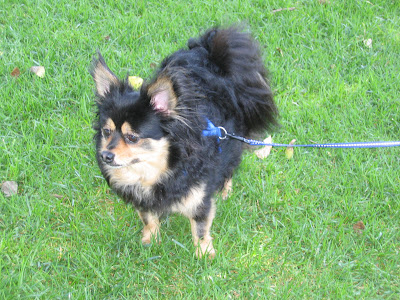 Elton loved watching the ducks while we ate. He is so good. Didn't bark at them once. 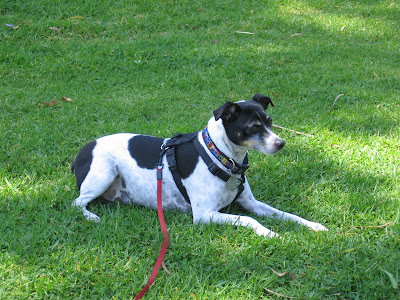 Zeke, on the other hand, tried several times to run after them. Thank goodness his harness and leach was able to hold him back. Poor ducks. After awhile they figured out he couldn't get to them and they didn't even bother to run away when he barked. 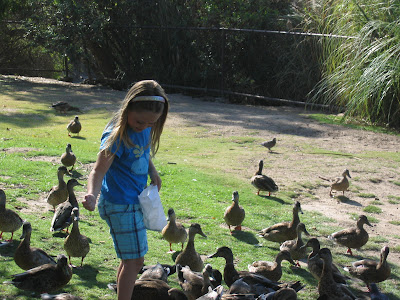 Trinity could hardly eat fast enough. She wanted to feed the ducks. 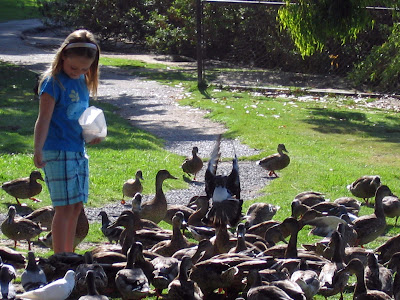 She went through three bags of food in no time at all. There were so many ducks. 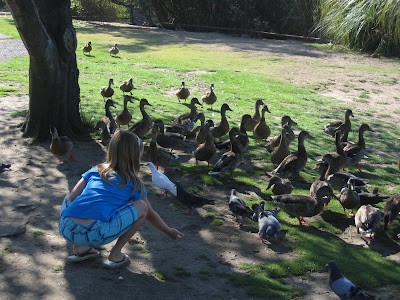 She could have stayed there all day. 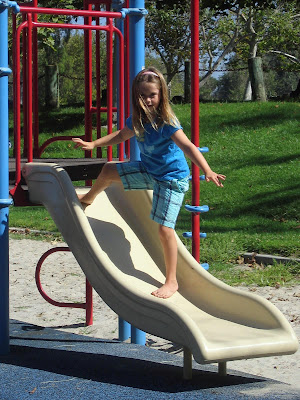 We took the dogs for a nice long walk and then made a pit stop at the play ground for her to play a little while.

She has grown up so much that the slide seemed so small for her. She thought it would be fun to "surf" down it.

She only got to do that once. I'm to big of a baby myself and was worried she would get hurt if she did it again.

It was fun spending some alone time with her. I don't know where the time has gone. She has gone from being a little girl to a big girl in the blink of an eye. 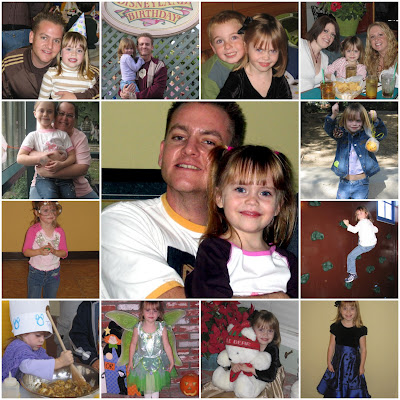 The above is just a few of the memories that have flown by. I know there are many many wonderful memories to make in the future though. So I'll just look forward and enjoy watching her grow up before my very eyes.

Posted by Joanne Kennedy at 8:58 AM

What a wonderful breakfast!! I love feeding the ducks too.

What a fun thing to have in your town!

I'm drooling over that cinnamon bun! I haven't had a cinnamon bun in... well, way too long.

You do seem to grab life and make the best of it, Joanne! I love that!

(I'm not giving you my phone number, though. I think you find enough other ways to entertain yourself. LOL!!!)

Looks like y'all had a great time. That is so neat that you took the dogs with you. Trinity is too cute!! I bet Lexi (my daughter) and Trinity would have a blast together!!

That is soooooo neat to have her alone for a while, chickee! Love the restaurant and cinnamon rolls are my absolutely favorite pastry....oooooo..squeeeeeealing.
Smoochies,
Connie

You do find the best places to go. If we ever do move to Huntington you've got to show me the "In" spots.

Handwriting analysis is something that has interested me greatly in the past, Joanne. I've often wondered, too, what an expert would say about my writing. That is so funny, that we share this quirk. I've never gotten in trouble with mine, though, because I keep my signature the same. I really hate that I can't change my signature on a whim now!

Hello..I found you from over at Shannon's place. Wanted to say I enjoyed your pics of the park..what a neat restaraunt..ohhh and the lazy dog cafe...wish we had one here in Oregon. I love cottage style too! Will be back to visit ya. cherry

Thanks for the visit!!

Yes, Great Niece, Autumn MAY BE going home soon with her mommy. It seems mommy and grandmommy got Bradley off the lease to the apartment. Because of Bradley's past, everyone there is afraid he might do "something" to Autumn...so they don't want him around. They'd actually like to see him go back home to Milwaukee...about 3 1/2 hours away! Personally, I don't blame them!!

What a lovely day you two had, the restaurant looked so great, what a beautiful place to have breakfast or any meal. You niece is so cute what a little doll. So many duck and only one of her, wow weeeeee.. Love the post and photos thank so for sharing. Have a great weekend.

The sounds like just the most perfect day! How lovely to have that restaurant in the park. Trinity is beautiful..
Penny

Hi Joanne,
What fun at the dog park and feeding the ducks. Yes, they sure do grow up fast. :) Reminds me of my little Kailee :)
Have a blessed Sunday.
Warmly, Deb

The picture of the Yummy roll is making me hungry.

Oh Joanne, I know how much you love Trinity, she is such a precious gift from God! What fun you all had, the food looked pretty good too, and the dogs really enjoyed themselves...even if the ducks didn't at first! :)
Hope your having a great weekend, can't wait to hear about your time with Gene too!

Lets talk this week and catch up, Josh starts ROTC monday morning, so I will be home.

what a fun day you had! Those cinnamon buns look so good! Cute dogs too!

Looks like a great day. I am so glad you and Trinity have such a great relationship. She will always treasure this time you spend together. It is a blessing.....

This is such a great place to go to especially with kids. When mine were little they loved to go here!

Thanks for bringing back fun memories.
xo Lidy

What a fun time....looks like you all really enjoyed your time together...Trinity toooo.
Hugs,
Mo:-)

Trinity is the most beautiful girl I ever seen. You are sooo lucky to have her in your life.

Trinity is such an adorable little girl, Joanne! She is lucky to have such a good Great Aunt such as youself to love her and share time with her.

I have many nieces and nephews and I've been lucky enough to be close to most of them as they grew up. Now they are having children and I hope to be able to show the same love and spend time with them as you do.