GREETINGS FROM ME AND SANTA 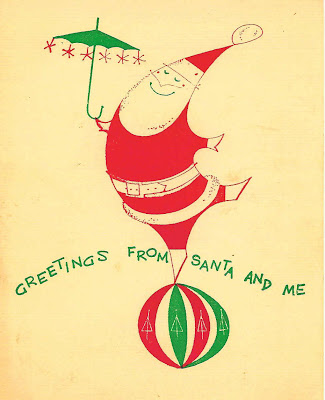 I love Santa Claus! Everything about him is great. He is kind, loving, generous, jolly and brings presents. He loves cookies too!

I love to collect Santa Statutes. Old ones and new ones alike. Every year I try to get at least one new one.

But the thing I really love to collect is old vintage photos of Santa. Santa with children, with adults, animals or just alone. I like the ones in the studios or the ones taken by families with their own camera.

There is something that just makes me happy when I see them. I thought I would share some with you. 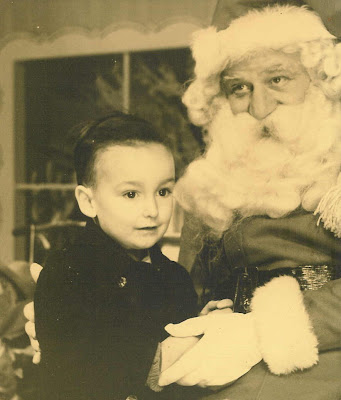 This little boy looks like he got all dressed up and his done perfectly so he could go see Santa and tell him what to bring on Christmas. He looks a little happy and a little scared though. 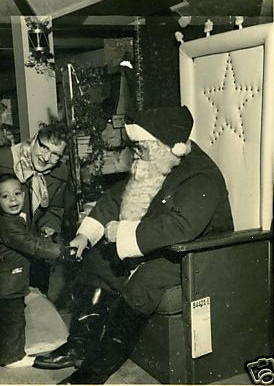 Why this little one doesn't look like he wants anything bad enough to sit on Santa's lap to get it. But mommy sure is trying to get him to go. 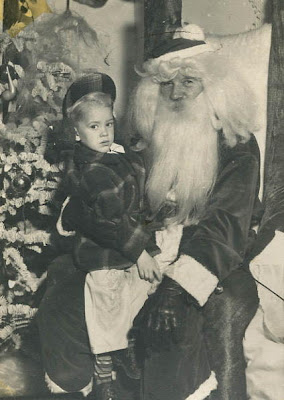 This little one looks like she just wants to get off Santa's lap. She told him what she wanted so hurry up and snap that photo so she can go home. 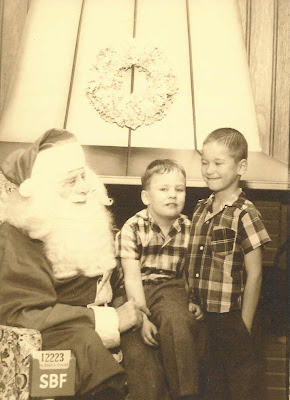 Now here are two little brave boys. I think they both went on and on with the list of things they wanted. They have no fear of Santa and have found over the years that if they tell Santa what they want, they get it. So they don't want to forget anything on their list. 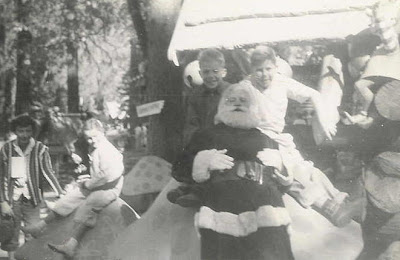 Oh my! Santa looks like he had a bit to much egg nog at this party. Let's hope it's not on Christmas Eve. 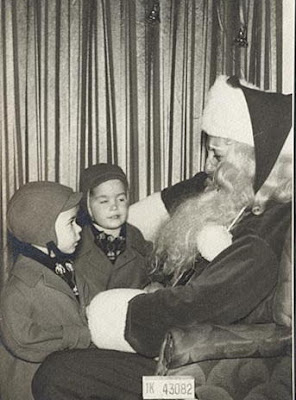 Two little shy ones here. Not really scared of Santa but not brave enough to sit on his lap either. 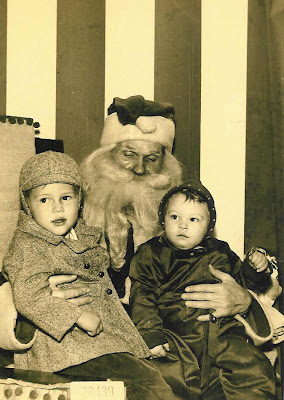 I think this one must have been taken after a long day. Santa looks like he is ready to fall asleep. 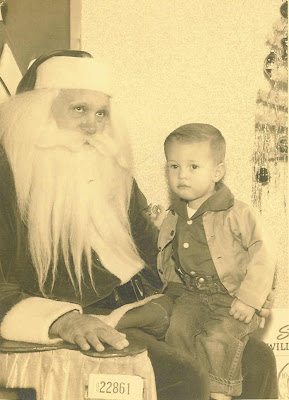 I'm not sure Santa or the little boy enjoyed their conversation. Both look like they are board of each other. 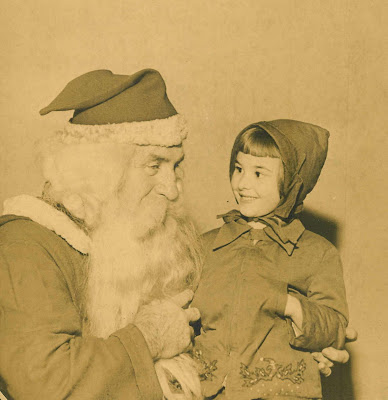 This little girl is in love! No other man will ever meet up to her expectations now that she has met Santa in person. 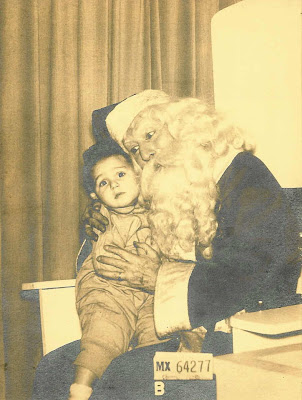 Back off Santa! You are scaring the little boy. In fact, you have a look on your face that is scaring me too.

Oh the joys of old photos with Santa. The stories they tell. Or at least the ones I can make up are so fun.

Do you have any photos of you with Santa? If so, share them with us.

Hope these put a smile on your face and made you long for the day when you can go sit on Santa's lap and tell him what you want for Christmas.

Posted by Joanne Kennedy at 7:16 AM

I had LOADS of pix taken of my 2 boys with Santa, but their daddy has all of them!

How fun are those pictures??? Love them! It's really wierd, but that first little tyke looks like my husband's baby pictures!!
Have a great day!
Karla & Karrie

I have heard (prob somewhere on cable news) that in 100 years there will not even be a Santa anymore...he will just fade away and out of style...they might be right, but I hope they're wrong!

those are TOOOOO precious! You should join us for Vintage Thingie Thursdays.... those would fit in perfectly! It is sponsored by Lisa over at anapronaday.com
(Confessions of an Apron Queen)

Loved them! Thanks for putting a smile on my face!

So now your a Santa Stalker.

I love the movie Miracle on 34th Street. I could watch it several times during the season.

I don't have any pictures of me and Santa ? Guessing I was a mean wittle kid.

What a great thing to collect! I love the one with the little girl looking into Santa's eyes!

Ahh..the Santa photos and memories!! I will hunt for mine and see about posting them. This is a fun idea to suggest!!

I love your Santa photos. I don't have any vintage photos, just one or two of my daughter meeting Father Christmas (as we call him over here) and his wife Mrs Christmas. What a great idea to start such a wonderful collection.

How cute! I love the vintage picture of Santa at the top, but the ones with the kids are priceless. :) They all react differently with Santa, and it's so fun to see all of these...thanks for sharing!

Hi Joanne,
Another Great Idea...guess I better dig out some old photos and post them sometime. Did I miss any of you with Santa??? I have a couple of Kailee that are priceless. Better go find them and get them on a post..after I do my window one, and door one..Of Joanne you are keeping me busy :) Hugs friend,
Deb :)

I love Santa Claus too, Joanne! I have many Christmas tree ornaments with Santa on them. I'll have to ask my Mom if she remembers where my Santa photo is --- I do remember my Santa had a sad face in the photo -- he was probably tired of seeing so many children, all asking for the same thing...lol! I was 5 years old at the time I really loved Santa Claus so I was excited to meet him. :-)

Thanks for all the nice comments on my blog! I enjoyed reading all of them and I'm honored you went back so far in my archives! You actually brought back some memories of a few posts I forgot about. You can certainly share that saying in your blog (the one about people coming into our lives) --I got it in an email forward and loved it too!

To answer your question -- I reseach all the places I visit on the internet and buy books or pamphlets to learn more and then read it all and paraphrase all I learn and write my posts. If I quote directly I'll give the source and use quotation marks. I've learned so much that way and it makes my memories about what I've seen more enjoyable.

Hope you have a great week!

Hi dear sister!!
These are so cute, the expressions are priceless! The learing Santa was my favorite...oh that is not good is it? (you know what I mean huh?)

Well, I will indeed be home tomorrow, call me if you have the time, we get home from our walk and have breakfast over by around 10am. This morning we tried to take a walk in the harbor but it ended up pouring down rain on us! Honey, who has very little fur, was so freaked out she nearly exploded!

Take care and I will talk to you soon!
XO,
DL

Joanne, this is such a good collection. Love them...
The only ones I have are my grandbabies on Santa's lap and they are very special to me.
Hugs,
Bonnie

Hi Joanne... You certainly have a wonderful collection of Santa photos! They were all great... but my favorite was the sweet lil girl with that sparkle in her eye! You can tell that she really believes!

Thanks for sharing and I hope all's been well in your world... God bless...

I came back for a visit and to tell you some good news - you won the giveaway over at my place! :)
I am going to be emailing you as well for your information. Congratulations!

Oh, what a GREAT thing to collect!! Do you display them at Christmastime? You could even prop them on the branches of a tree... I have a b&w photo from the late 50's of my sister and I with a Boston "Jordan Marsh" Santa. I'll have to dig it out and post it... And, of course, I have some neat ones of my girls...Great idea for a post! ...Donna

Hi Joanne!
I absolutely LOVE those Santa photos! I still have mine from when I was a wee one. I'll have to post them at Christmas time.
You know I don't ever recall seeing any Santa photos like that to buy around here. You must have a great luck finding them. Too cute!!
Hugs, Sherry

Love your comment on the last one! Too funny:D What a great collection your have! I've never heard of anyone collecting these before! Very cool!!

Your comments actually made me laugh out loud at the computer, not something that I often do. I also collect Santas, my daughter Ella collects snowmen and my other daughter, Rosie collects reindeer. I'm glad I got to choose Santas. I also like the St Nick looking ones, due to my Dutch heritage. Unfortunately, I never got any photos of myself as a child with Santa, in fact I can't even remember visiting him. Maybe it was too much for my Mum with my 8 brothers and sisters. And although my girls visited Santa, I never got any photos. Last year was the first year that they didn't want to visit him. Too babyish. Sob. I like your blob. This is the first that I've looked at it and will be back.

What great pictures. I have some old Christmas cards from the'50's. I would never sit on Santa's lap! My mom would get so frustrated with me!

Just darling what a neat idea for a collection..
hugs, Patty

Such great pictures. Isn't it fun to see how Santas have changed through the years. The ones here now are all older men with white hair and real beards. I guess kids are more sophisticated today and would think a fake beard is terrible.

What good ideas! Wouldn't a Christmas card by darling with one of these old prints? I have a Santa collection too and I love, love the dear ole guy. Nerm

Wow! I got really behind on the blogs I love. I'm just reading about your vintage Santa's now and I have truly loved reading this. You have some beautiful things. I also really love the pink snowman you got on ebay. How pretty. I must look there for similar things. Joanne - you always have the nicest things - you take such great pictures and you do such a good job of writing to go along with the pix. I really enjoy reading your blog. Okay, I've got to go read some more, but this post really got me!! Thanks!!!