GO VOTE FOR THE BEST PARTY 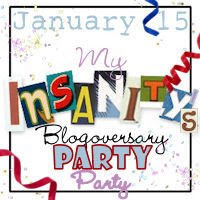 I know I've told all of you that Kendra over at My Insanity was having a blogoversary party and everyone linked up to show their parties they had given.

Well I didn't know that she was going to have a contest for the best party!

I can't believe my Academy Award party made it to her finals! I was so excited when I saw that. Thanks Kendra!

At first I was going to ask everyone to go there and vote for MY ACADEMY AWARD party, but then I thought that was wrong. So, I'm just going to ask you to all go to http://meandmyinsanity.blogspot.com/ and vote for the party you like the best.

I figured everyone wanted to win just as much as I did and to be honest it really is an honor just being nominated! So, vote for the party you liked the best and thought was different. No matter who wins, there are lots of great party ideas. I can't wait to try a few of them out myself.

To vote you just go to My Insanity's Blog and on the right side she has the list of the parties to vote on.

Posted by Joanne Kennedy at 5:38 PM

I just voted Joanne, and I loved it. Great job as usual! :) Now we just need some more peeps to head over there and vote. Good luck!

I voted ... for you of course, since I loved what you did for your party. Can't wait for you to post who wins. Hope it's you! xxoo

Joanne,,I have to say your Academy Award party is great,, I love it and will vote for it. The statues are absolutely fantastic..how did you ever do that?? Great job and am on my way to vote right now

You have an awesome blog!
smiles, cyndi

Congrats Joanne! Your Oscar Award party was so wonderful and unique! I'll go over and vote for it right away!
Happy Day

I did my duty and voted for your party. Besides it was the best in my eyes.

I'm heading over now and hope I'm not too late to get in on the voting!