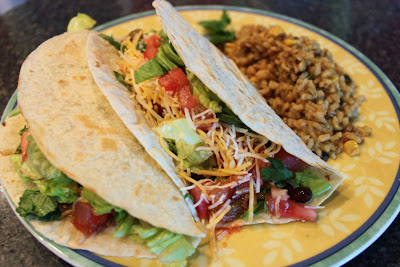 I have been doing great on Weight Watchers this time around. I think making sure I don't eat the same old "diet" food is really going to help.

This time around I'm going to eat things I really love.

If I want a piece of candy, I'm going to plan in that candy and eat it. I'm not going to go for the "diet" candy that really doesn't taste good and doesn't really satisfy me.

I will have low fat or light items only if I like them and would be fine always eating them. 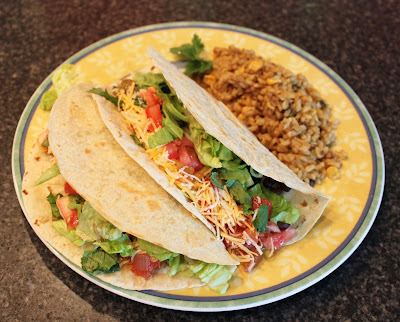 Tonight I felt like tacos so that's what I had. No not the fried shell tacos with tons of chips and salsa like I would have had before.

This time I made healthy tacos that I not only loved but would eat all the time.

I used flour tortillas that are called Lite Balance. They still have some fat in them but not like the regular ones.

I heated them up in a frying pan but didn't use oil. They do get crusty but still stay soft.

Then I used black beans (I don't eat meat) and add lots of lettuce, tomatoes, salsa and cilantro. I had to have cheese too. I mean really. What is a taco without cheese?

I just used regular grated cheese but used a much smaller amount then I would have before.

I was able to have two tacos and even a cup of Santa Fe rice. Boy was I full after eating this.

Eating healthy really can be tasty. It doesn't take that long to make healthy food either.

I'm going on my 4th day of being on Weight Watchers and while we don't weigh in but once a week, I have gotten on my scales at home and have already lost some weight. Of course, that just makes me want to stay on track even more.

Hope all of you who emailed and left messages saying you were also going to be starting WW or another form of a diet/healthy eating plan are doing well too.