HAPPY HANUKKAH TO MY JEWISH FRIENDS 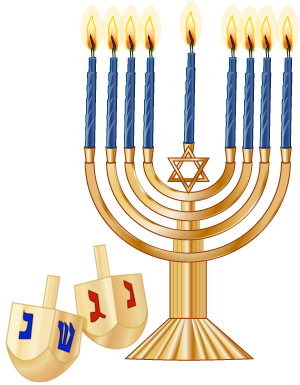 Tonight at sun down started the Hanukkah Holiday celebrated by Jewish people everywhere.

While I do not celebrate it, I do like to learn more about it each year. You see, I have a Jewish friend and every year she invites me to her Hanukkah party so it always makes me want to know more about all the different ways they celebrate and why.

Most people know that the menorah is lite each of the eight nights to symbolize the time in history when the Greeks had defiled the oil needed to light the lamp and the Jewish people only had enough oil for one night. But, miraculously, the lamp stayed lit for eight days, the time it took to prepare fresh supply of oil for the menorah.

The original menorah only had 7 stems. A place to be lit for each night of the week. However, most menorahs now have 9 stems to represent the eight nights the lamp stayed lite and one space to keep the candle used to light the others.

The original menorahs were oil burning lamps. Now days most are more like a candle holder and the candles are burned rather then oil. 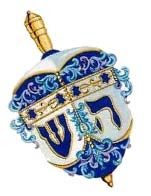 The dreidel is a game that is now played by the Jewish children.

However, it originated during the rule of the Greek King Antiochus who had banned the study of the Torah.

The Jewish people would go off and study in secret and took toy tops with them.

One story I have heard is they would write parts of the Torah on the top and when the soldiers came around they would spin the top so they could not see what was written on the top and it would appear they were just playing a game.

The other version I heard is they would hide their Torah and bring out the top and pretend they were only playing a game. 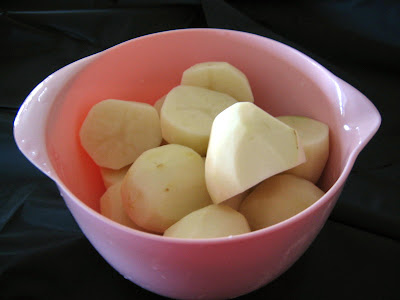 For the past four years it has become a tradition of friend and me to spend a day together and turn pounds and pounds of potatoes into a yummy dish she serves at her Hanukkah Party. 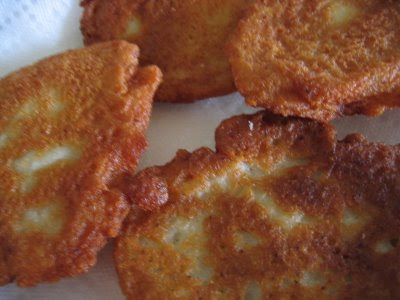 So, that is what we did today.

I enjoy my time we spend each year doing this. We also exchange gifts. I give her Hanukkah gifts and she gives me Christmas gifts.

I hope this is a tradition we continue for a long time.

While I may celebrate Christmas, I will always remember the traditions of Hanukkah and each year I will try to learn a little bit more about the customs.

So, to my good friend, Sandra and all my Jewish friends out in blogland have a wonderful Hanukkah!

Thanks for stopping by my blog and your sweet comment. I enjoy making these little dollhouse miniatures so much! I enjoyed your post on Chanukkah, I, too, am Christian, but enjoy learning more about the Jewish religion.